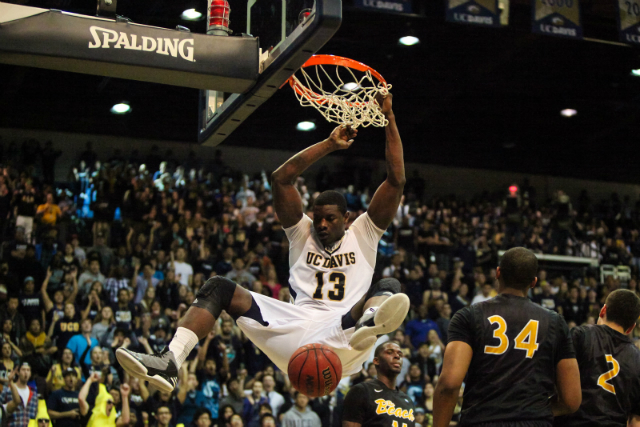 On Thursday night, the men’s basketball team made their debut on ESPN2 in front of a sold-out Pavillion crowd of students and fans.

Last March, UC Davis pulled a 3-13 Big West Conference record and failed to win a game on the road. Head coach Jim Les knew his team needed a complete overhaul to turn it around this year and somehow, some way, he managed to accomplish that.

This season has been shocking and humbling to watch. Junior Ryan Sypkens returned to the roster after sitting out last season with a serious knee injury. He has managed to tally 104 three-pointers this season. Sophomore J.T. Adenrele spent the offseason accruing muscle mass and vicious accuracy from the free-throw line. Seniors Paolo Mancasola and Ryan Howley have reveled in the new roster. Mancasola governs one of the Big West’s best offenses and Howley harvests rebounds from all sides of the court.

As 5,760 Aggies fans piled into the Pavilion on Thursday, a vast majority of them had never seen this team play. However, the Aggie Pack and Aggie faithful were thrilled to introduce a certain sophomore. The nation met Corey Hawkins alongside thousands of UC Davis students and it was an explosive introduction.

The energy in the Pavilion on Saturday against Long Beach State might have worked against the Aggies in the first few minutes of the game. The team was skittish and it showed. UC Davis missed a few shots out of the gate, allowing Long Beach to jump to an early 10-point lead. As the nation started to wonder how bad the blowout was going to be, the Aggies turned it on. Much to the crowd’s delight, UC Davis cut the deficit and the first half turned into an electric back-and-forth battle. By halftime, it was a one-point 49er advantage.

After halftime, the Aggies simply found their stride. Sypkens drilled a two, earned the foul and turned it into a different kind of three-point score than he is used to. Howley came in and dunked on the next possession. Adenrele blocked the following LBSU possession and Hawkins managed to add to his monstrous point total by scoring a lob he threw into the air as he was falling to his back. In case fans missed it, he did it again soon after for good measure. Meanwhile, junior Tyler Les brought his usual fearlessness to the court and made some stellar three-pointers of his own.

As the game dwindled down, UC Davis was gearing up to pull off one of the biggest upsets ESPN could have expected to air this season. With two and a half minutes left, the 49ers held a slight advantage over the Aggies, but the Pavilion went silent as Hawkins fell to the ground and failed to get back up.

His leg prevented him from finishing the game and the Aggies’ mettle was tested.

“Corey isn’t just the best player on our team,” Sypkens said. “He’s the craziest player I have ever balled with.”

Mancasola regrouped his crew and inbounded the ball to Sypkens for an immediate three. With the game standing at 77-76 LBSU, the Aggies were able to force an LBSU miss and shot-clock violation after the 49ers were able to grab their own rebound. With the Aggies in possession of the ball as the minutes closed, victory seemed to be in their own hands.

“The goal was to get it to Sypkens,” head coach Jim Les said. “If that failed, Paolo needed to penetrate and make a play.”

LBSU anticipated the Sypkens three-point buzzer beater, and their defense was able to shut that option down. Mancasola recognized that and charged the basket. Somehow, he managed to see a wide-open Howley through a mess of players. Howley caught the ball and shot a wide-open three that knocked the rim and bounced out.

Just like that, the possibility of a Cinderella victory was over.

“Honestly, I’d give Howley another 10 looks like that,” Les said. “And I made sure I told him that.”

It was quiet in the Pavilion for a few seconds and then the Aggie Pack and the Band-uh! kicked into the UC Davis Alma Mater. It was an odd mixture of pride, amazement and disappointment in the building. Everybody wanted a win, but fans were just amazed by the level of play the Aggies brought to the game.

As much as winning that game would have meant, it cannot be compared to the feeling of bringing home a Big West Championship banner to hang on the ceiling.

“You know, tonight was disappointing. It hurts and it should. I told them that. But tonight isn’t the end game. The tournament is the end game and that’s where we want to be,” Les said.

The Aggies are headed to Anaheim as the sixth seed. They suffered another disappointing loss on Saturday night when UC Irvine was able to charge back from an abysmal first quarter to squeak out a win.

Unfortunately for UC Davis, they held a first-half lead of 47-28, but failed to close it out as they were outscored 60-38 in the second half. The final tally stood at a shocking 88-85 for a disappointed UC Davis team.

Despite being 0-2 this week, they proved that they can go toe-to-toe with the Big West’s best teams, and if they continue to work hard, they will see the ball fall their way.

Losing Saturday night’s game marred Senior Night for Mancasola and Howley, but both are business-like players. There is no doubt that they will bounce back from this and lead the team to greater heights in Southern California.

“Howley plays his butt off every single game. It’s been a joy to play with him and this whole group. I will always cherish these memories,” Mancasola said.

Ultimately, the Aggies have to center themselves and carry their poise to Anaheim.

“We’re going to prepare as best we can. We have to keep at it if we want to see the right kind of results,” Les said.