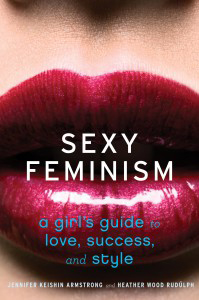 I must admit, in the beginning, I thought I would hate Sexy Feminism. With the subhead “A Girl’s Guide to Love, Success, and Style,” the cover words are superimposed over a close-up photo of glossy, sultry, slightly-parted lips.

It became very clear in the introduction that the book was for a very specific demographic when the authors self-identified as “shockingly mainstream” young women growing up.

So in other words, I was ready to get outraged. I had primed paragraphs in my feminist bandolier about the exclusion of the lower-class, mixed-race, disabled, genderqueer, androgynous lesbian: You can’t just ignore them! They’re here, they’re queer, write books about them!

But Heather Wood Rudúlph and Jennifer Keishin Armstrong hooked me with the second page of the first chapter, where they declared the first two steps of feminism: “Step 1: Call yourself a proud feminist. Step 2: Live up to the word.”

They put the beat-down on the “I’m not a feminist, but …” stance: “To distance yourself from the word is to imply there’s something wrong with feminism and/or feminists, an implication that leads to the continued denigration of the cause itself,” wrote Rudúlph and Armstrong.

They sucked me in, with strong language, first-person plural and historical excerpts defining the waves of feminism or touting strong women in history. Sexy Feminism hits on the concepts of slut shaming, wearing makeup as a feminist act, supporting female co-workers in the workplace and more.

The two collaborated via Google Docs to write this 200-page book, and are now touring the country on a publicity tour for its release. They came to the Avid Reader in Davis Friday, April 19 to talk about and read excerpts from the book.

Sexy Feminism isn’t Rudúlph and Armstrong’s first creation. A lot of the information came from their blog, sexyfeminist.com, which was formally a web-based magazine, Sirens Mag.

It’s true, this book is not for queers. It is not for trans* people, it is not for Women’s Studies majors writing their theses on Simone de Beauvoir and it is not for Pussy Riot, Femen, Amina Tyler or Malala Yousafzai.

“It’s for all the women who are like, ‘Am I allowed to call myself a feminist if I get a bikini wax?’ or ‘Am I a feminist if I go to Sephora all the time?’” said Armstrong. “So there is a very specific audience for this. One of the things we’ve continued to say throughout this book is just because we write about these topics doesn’t mean they are the most important topics facing feminism. Lip gloss and bikini waxes are absolutely not the most important issues facing women throughout the world, and we know that.”

A combination of “lifestyle guides and topics covered by women’s magazines” (Rudúlph and Armstrong both have journalistic backgrounds in pop-culture writing), Sexy Feminism is meant more as an introductory feminist manifesto. As Rudúlph put it, “Sexy Feminism is a gateway drug to feminism.”

“We had this guilty pleasure with lifestyle guides; we just really take great pleasure in them,” Armstrong said. “We love the idea of combining the idea of lifestyle guides topics normally covered by women’s magazines, but instead of making women feel bad about their lives, instead saying, ‘Here’s ways that you can make your life better through you, through feminism,’ and making it a positive force instead of a negative one.”

The hope is that young women will pick up or be given the book and, slowly but surely, things will start to fall into place. They will reach that “a-ha” moment, and the “I’m not a feminist, but …” phrase will become but a phase from their past.

“I see a lot more potential and hope in young women today,” said Rudúlph, “and whatever this next movement is, call it fourth-wave, call it whatever — women who are being feminist activists but are not identifying with the label because they’re still not sure what it means, but they’re still doing the real work. There’s a huge movement out there that is so encouraging, and we want to help encourage that.”

So give this book to your younger sister, your “feminist curious” friend or your mother-daughter book club. Sexy Feminism: It’s what’s for fat-free (and guilt-free) dinner.