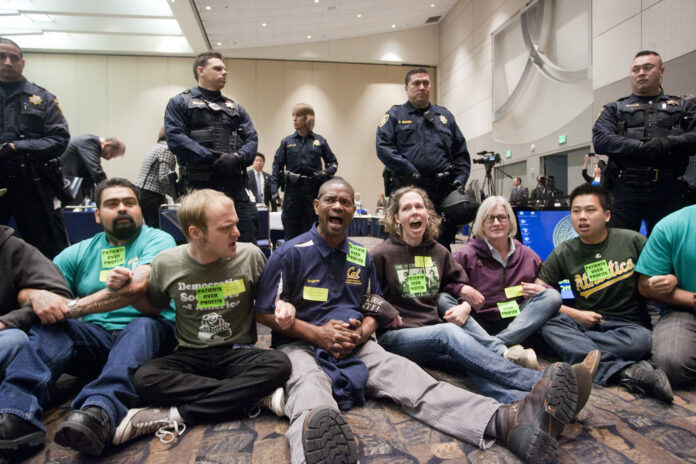 The UC Board of Regents meeting at the Sacramento Convention Center was momentarily interrupted on May 15 after union healthcare workers from AFSCME 3299 began chanting loudly during a sit-in.

Thirteen arrests were made and AFSCME 3299 president Kathryn Lybarger was among the group. The protesters, wearing stickers reading “Patients not profits,” chanted phrases such as “What’s this about? Patient care!” and “Whose university? Our university!”

The building was heavily patrolled by Sacramento police.

The meeting reconvened after approximately 25 minutes.

AFSCME 3299 has also scheduled a strike at the UC medical student health centers on May 21 and 22.

“This strike is about standing up for the students, patients and taxpayers the UC Medical System was intended to serve … We will not rest until UC gets its priorities straight,” Lybarger said in a press release.

Members of the public also addressed the Professional Degree Supplemental Tuition vote in the July Board of Regents meeting and online education.

UC Student Association President Racquel Morales spoke at the meeting as well, discussing the UC-wide campus climate survey that was distributed in the winter and what will come about from the data.

The Board continued to discuss the recent May Revise 2013-14, which calls for a four-year tuition freeze.

The meeting will continue Thursday, beginning at 8:30 a.m.