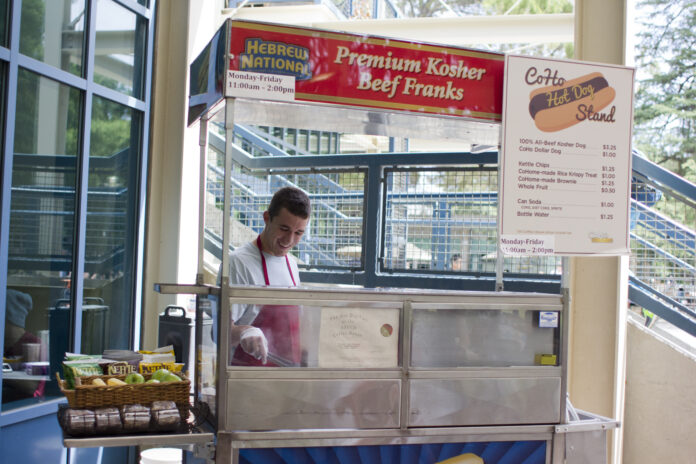 What do a warehouse in Reno and a corgi dressed in a hot dog costume have in common? If you’ve visited the Memorial Union (MU) in the past few weeks, you might already know the answer to this question.

A new hot dog stand has joined the ranks of the many on-campus dining options, located on the ASUCD Coffee House (CoHo) patio.

Open from 11 a.m. to 2 p.m., the stand offers many options, including $1 hot dogs, $3.25 Hebrew National dogs and other amenities like chips and soft drinks.

Darin Schluep, the food service director for the Associated Students Dining Services, was approached by a sales representative from Hebrew National last summer who was hoping to bring the old, unused hot dog stand out of storage in Nevada and give it a home where it could be used to its fullest potential.

“ASUCD Dining Services tries to offer as much diversity in menu options as we can,” Schluep said.
While the new stand is the only place on campus that currently sells hot dogs, its claim to fame stems from its new mascot, Rodney the Corgi.

Dressed from head to paw in complete hot dog regalia, Rodney captured the attention of many students when his owner Nycole Copping, a fourth-year neurology, physiology and behavior major and employee at the CoHo, brought him to campus to advertise for the stand.

“I had just recently received Rodney and was bringing him to campus every Friday for all my co-workers at the CoHo to see him and play,” Copping said in an email interview. “He became such a little socialite that people started asking for him all the time!”

Rodney’s frequent presence led the staff to dub him “The CoHo Dog.” When the new hot dog cart was established outside, the staff joked about dressing Rodney like a hot dog. A few more jokes and one hot dog costume later, Rodney became the new mascot for the fledgling cart.

Taking easily to the crowds of customers hoping to take their picture with this one-of-a-kind pup, Rodney melted the hearts of his fans.

“People would try to pet his stomach because he tried to roll over, but the costumes’ buns got in the way, so he couldn’t turn over completely,” Copping said.

The new cart now competes for customers with The Hotdogger, residing in downtown Davis on E Street.

With a starting price of $3.50 for a regular hot dog, the restaurant is both an upgrade in price and in options, boasting six different types of mustard and a myriad of add-ons to accent your chosen weenie.

Ivan Franks, along side his wife Cheryl, owns the Hotdogger and has been running the restaurant since 1984. Franks assures the community that his store is here to stay and there is certainly space for both storefronts to flourish.

“The more the merrier,” Franks said.

The Hotdogger caters to a range of clientele, from the hungry freshman to the hot dog aficionado. Regardless of the competition, the Frankses continue to focus on the important things — the franks.

“Our job is to make the best dog we can,” Franks said.

MARK BURNSIDE can be reached at features@theaggie.org