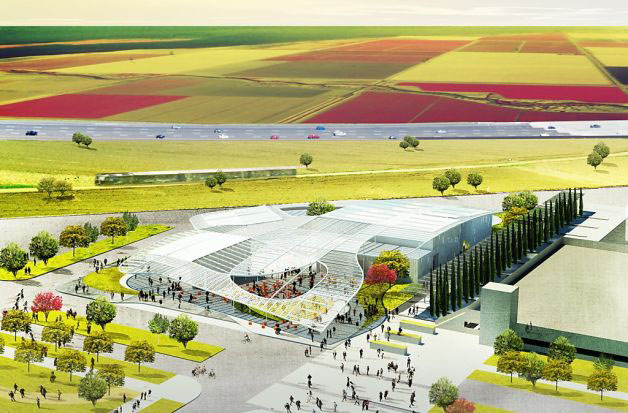 In the face of economic duress, a rather infamous topic of discussion for past years has been, and continues to be, the status of extracurricular programs for pre-collegiate students. Artistic education comprises a plurality of such public programs that have been at the forefront of such controversy. It is in times such as these, when an absolutely essential branch of education finds itself on the precipice of extinction, that those who face the reality of these struggles will inevitably look for reasons to continue fighting.

And so, nestled comfortably between the Interstate 80 and the Robert Mondavi facilities on the face of the UC Davis campus, lies the freshly trodden ground of what will become the Jan Shrem and Maria Manetti Shrem Museum of Art — a beacon of hope and inspiration for artistic communities and architectural enthusiasts nationwide. The design for this 50,000-square-foot building, which will champion existing UC Davis L.E.E.D. sustainability efforts, is an aesthetic intermarriage of scientific and architectural ingenuity and artistic prowess.

L.E.E.D. (Leadership in Energy and Environmental Design) is an internationally-recognized green building construction standards agency that measures the sustainability of materials used and overall structural design of a building. The UC Davis campus, which is an international leader in sustainable architecture, is home to a growing number of these L.E.E.D. certified structures.

“The design for the new museum at UC Davis turns the traditional model of museum design inside out,” said UC Davis Chancellor Linda P.B. Katehi in a press release. “From its curved glass walls to its soaring canopy, it will draw people in, surprise them, and engage them. All who enter this museum will become students again.”

The designs for the Jan Shrem and Maria Manetti Shrem Museum of Art, which have been deliberated upon for several months, have only recently been finalized. The Richard R. Nelson Gallery (located on campus, slightly past the Horticultural Science Center on Old Davis Road), was the temporary home of the three-dimensional models depicting the three potential museum designs. Students, community members and eminent decision-makers, all of whose input was pivotal in determining the final design, decided upon the M.C. Escher-esque structure entitled SO-IL, designed by Ivy-League architects Jing Liu and Florian Idenburg.

“The Central Valley breathes a spirit of optimism,” the designers stated in a press release. “Whether one is influenced by the sweeping views over the flat plains beyond to the horizon, or the sense of empowerment one feels when being able to cultivate and grow freely, the spirit of this place is one of invention and imagination. It is precisely this spirit we capture in our architectural proposal for the Jan Shrem and Maria Manetti Shrem Museum of Art.”

The designers see the museum as more than just a well-designed building. It represents a paradigm shift in the way humans interact with the environment.

“We believe it will be the first platinum museum in the country, and we have various ambitious plans for the building,” said Gary Dahl, the UC Davis Department of Design and Construction Management project manager for SO-IL. “… We want the building to be a place for students to gather and spend time. Even though we are aware that the museum will be a little far from the core of campus, we want to ensure that it will become a part of the student experience.”

The SO-IL structure features sustainable design and materials worthy of L.E.E.D. Platinum certification, the highest sustainability label attainable. These materials, which are still under consideration, will contribute to the architectural form of the building that appears to almost defy gravity. The entryway to the museum will feature a swooping lattice canopy that rises over and encases the museum body, and the interior, an optical illusion that will utilize advanced horticultural and interior design techniques in order to create an intermingling of outdoor and indoor environments.

“It was very important to the architects to make it difficult for museum visitors to determine whether or not they are inside or outside — arboretum horticultural specialists have been consulted to make this possible,” mentioned museum director Rachel Teagle. “Determination of construction materials for SO-IL are nowhere near final, but the design is aspiring for the L.E.E.D. Platinum certification — a really important reason why this [SO-IL] design, in particular, rose to the top.”

Ultimately, the design of the structure and the diversity within are meant to be reminiscent of the patch-worked Central Valley landscape — symbolism that both literary fanatics and scientific research wizards will, for once, simultaneously be able to appreciate. Developers hope the space will not only become an excellent, multi-purpose destination for students (past, current and prospective), it will also serve as an exciting venue for campus visitors, architectural enthusiasts and artistic aficionados.