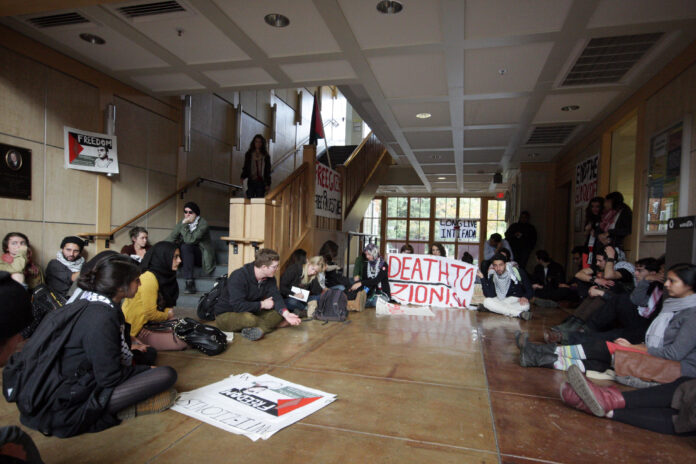 The now seven-month-old March in Solidarity with Gaza, which led to the occupation of Dutton Hall on Nov. 19, 2012, has been muddled with reported incidences of anti-Semitism.

According to a Feb. 5 letter to UC Davis Chancellor Linda P.B. Katehi from the AMCHA Initiative, a nonprofit organization which aims to combat anti-semitism at American colleges and universities, Jewish students were reportedly “intimidated, harassed and bullied.”

The event, originally organized as a rally, aimed to stand in solidarity with people affected by the Gaza bombings.

A Jan. 28 letter from the AMCHA Initiative to the Chancellor also stated that after a student expressed disagreement with one of the signs being displayed, “a protester grabbed his collar, raised a fist and forced the student to leave the building.” Other cases during the occupation included protesters chanting “leave our space” and “shame on you.”

David Marias, president of Aggies for Israel, said that three pro-Israel students inside the building were also called out and verbally attacked.

“All they were doing was standing in the back and quietly listening to other individuals voice their opinions. They were not contributing to the conversation nor were they trying to shut down the event; they were simply listening,” Marias said in an email interview.

UCLA professor emeritus Leila Beckwith and UC Santa Cruz lecturer Tammi Rossman-Benjamin, both of whom drafted the letter, could not be reached for comment.

The protesters dispersed shortly after 3 p.m.

Claudia Morain, director of the UC Davis News Service, said that no arrests were made, that no grievances were filed and that police initiated an investigation into the allegation of the student who was grabbed by his collar.

“Ensuring that individuals on this campus can express and hear a range of viewpoints requires ongoing effort on everyone’s part. We are committed to ensuring that this university remains a vibrant marketplace of ideas,” Morain said.

Provost and Executive Vice Chancellor Ralph J. Hexter responded Jan. 31 in a letter, stating that if true, the allegations are “very disturbing” and that he and the Chancellor are committed to ensuring that the events are “immediately addressed.”

According to letter from Michael Sweeney, senior campus counsel to President and General Counsel at The Louis D. Brandeis Center Kenneth L. Marcus, the event coincided with a separate event on the East Quad, commemorating the one-year anniversary of the November 18 pepper spray incident. Sweeney also stated that a number of administrators were on-site and spoke to members of Aggies for Israel; the members did not make a complaint.

Marias said University administration expressed to him that they investigated the events and he has met with them to address concerns of UC Davis’ Jewish and pro-Israel students.

“I feel confident that they have reviewed many accounts of what happened that day,” Marias said.

He also said that some of the recommendations that have been expressed to members of the administration have been put into effect.

“I think that the administration is constantly working to adapt to situations that require careful action, and that they have changed their policies with regards to occupation of buildings on campus. I also feel that the administration has been made more aware of the student actions taken and are working on amending policy to properly interact with students that is productive and does not infringe on anyone’s rights or inflame any situation,” Marias said.

The pro-Palestinian UC Davis student organization, Students for Justice in Palestine (SJP), did not sponsor nor was part of the Nov. 19 event. According to SJP president Diyala Shihadih, it was arranged by an autonomous group of activists on campus.

Members of this group denied previous interview requests by The Aggie.

“There was no anti-Semitism during the event. In fact there was a lot of talk about the difference between [anti-Semitism] and [anti-Zionism]. People kept saying that the Jewish people are our allies and that the event was in no way [anti-Semitic]. There were no acts of aggression directed at any Jewish students based on the fact that they were Jewish,” Shihadih said in an email interview. “The few Jewish students in Dutton were often referred to as ‘brother’ or ‘sister’ and were given opportunity to express their opinions even if their thoughts did not match with the opinions of others in the space.”

Most recently, the University of California Office of the President launched a systemwide campus climate survey that concluded in February, which called for UC staff, faculty and student opinion on how safe and comfortable they feel to express information, such as personal religion, disability, ethnicity and sexual orientation.

Marias said he believes that there is a percentage of students who feel reluctant to report incidents of hate.

“We are working to reduce this number of students so that no student ever feels reluctant to report situations or experiences like this to administration or anyone,” Marias said.