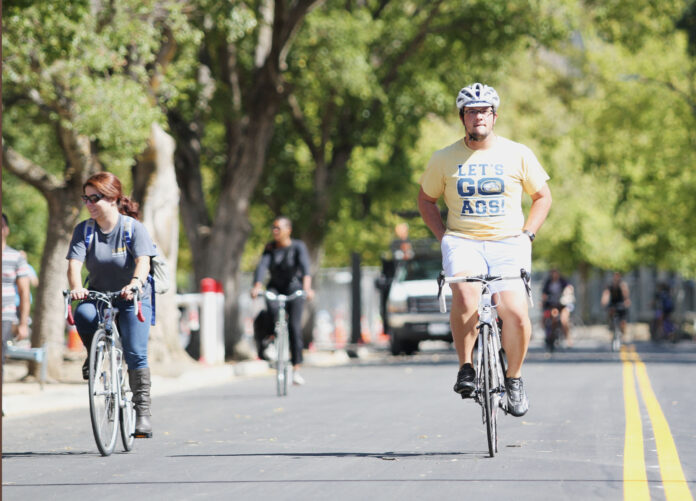 Biking is an inextricable part of daily life at UC Davis. Unfortunately, as incoming freshmen, many of us haven’t been on a bike for years before dusting off the cobwebs and loading it up for move-in day. This leads to some shaky first rides around campus and more than our fair share of bike accidents.

As the year progresses, however, we gain confidence. We take turns faster than we probably should. We shoot through the bike circles without braking. Finally, we start taking hands off the handle bars.

Riding one hand down is pretty simple to master. Especially with the added motivation of that urgent text vibrating in your pocket. The real challenge comes from trying to remove the second hand.

“Confidence is key,” said Colin Braun, a third-year civil engineering major at UC Davis. “You’ve got to have your head up, your back straight, and — most importantly — you’ve got to keep your speed up.”

Although it may seem intimidating at first, Braun brings up a lot of good points. Riding with no hands boils down to two main physical principles: center of mass (COM) and gyroscopic motion.

“The COM is the average location of weight in a given object. That is to say, it’s the average point where all forces act,” said Garrett Levy, a recent UC Davis graduate with a degree in civil engineering.

In an object with uniform density and a fixed shape, the COM is at the very center. However, one tricky thing about COM is that it is not necessarily at a fixed point for manipulable objects.

Objects that are highly variable in shape, such as the human body, can move their center of gravity to many different positions based on posture. By changing an object’s shape, you can even move the center of gravity outside of its physical boundaries.

When the COM moves below the point on which an object is sitting, it makes the object’s balance very stable. This is is how those balancing birds we all used to play with as kids work. Unfortunately, the average person on a bike won’t be able to achieve that level of stability.

Having your back straight and your head up allows you to move your COM to inside your torso. Doing so prevents small changes in body position from having as great an effect on your overall balance. Also, since most bikes have the back wheel at least partially under the seat, it moves your center of gravity to be more directly over the wheel, which helps a lot.

COM works in concert with the second principle, gyroscopic motion, to help keep you riding smoothly.

“Gyroscopic motion occurs as a result of the law of conservation of angular momentum: Once an object has been made to rotate, it will continue to rotate around the same axis with the same speed indefinitely, unless it is acted on by an external torque,” said Dustin Burns, a physics graduate student and teaching assistant for the Physics 7 series at UC Davis.

Put simply, this means that once your wheel starts spinning, not only does it want to keep spinning, but it wants to keep spinning with the same orientation, that is, perpendicular to the ground. You actually need to exert force in order to fall over.

Unfortunately, since your COM will be above the point on which you are balancing, torque will be in no short supply, so don’t be too adventurous. Put in the time and get comfortable on your bike before you try to get creative.

KYLE SCROGGINS can be reached at science@theaggie.org