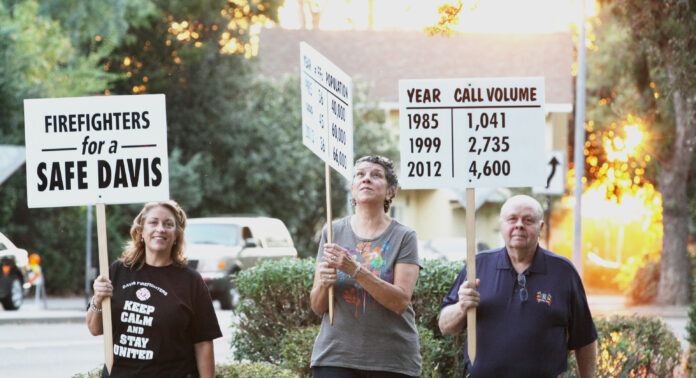 The JPA California Legislation came about in 1921.The legislation allows public agencies to work in concert as separate institutions. The purpose is to cut costs, increase efficiency, reduce or eliminate overlapping services and share resources.

It is so flexible, according to past CDFD Interim Fire Chief, Scott Kenley, that it can apply to almost any two entities that involve cooperation with no set formula.

For this reason, many fire departments all over California have formed similar intercity agreements — San Mateo County, North County Fire Authority and Central County Fire Department, to name a few.

The fire department has been through many changes in the last few years to arrive to this point. In September 2010, the CDFD and the UCDFD had a “Management Services Agreement” (MSA). The MSA dictated that the two departments would share a fire chief and an assistant fire chief as a trial to see if full consolidation would be an optimal choice. However, it was paused two years later due to “unresolved conflicts,” Kenley said. Though it provided positive contributions, such as Engine 34, it wasn’t the ideal situation.

“One reason we discontinued the MSA, until we came to some other agreement, is we wanted consistent leadership and not interim leadership,” Meyer said.

Since then, the UCDFD has hired a full-time fire chief. The CDFD, however, has had a series of interim chiefs. And though the UCDFD and the CDFD do not remain in a MSA, they continue to work together — most recently in regards to the boundary drop implemented in September 2013. The boundary drop separates the response districts such that now the closest resources are dispatched to all calls for service.

“Over the past couple years, there’ve been some challenges in the [City’s] Fire Department … [due to a lack of] a full time fire chief since 2009,” said Joe Tenney, CDFD fire captain and a member of the Davis Professional Firefighter Association — Local 3494.  “There’s been a lack of leadership and direction … [the City has] cut nine positions which has had a real effect on the staffing for emergency response. We are concerned not only for the firefighter safety but for that of the community.”

Local 3494 compiled data showing that in the last two fiscal years, there has been a 220 percent increase in overtime and call volumes have more than doubled.

Many options have been considered but as of yet, none have appeared ideal. Kenley discussed alternatives at the city council meeting — a full merger, shared management services or completely autonomous entities at some point in the future.

Kenley explained that a full merger would yield a projected cost of $1.3 million to UC Davis while saving the City of Davis $170,000 annually. It might also mean the loss of the UC Davis student firefighter program.

A shared management service exercising the JPA would in turn provide deputy chiefs that answer to the Fire Chief for additional intra-department continuity and management, with projected cost savings of $78,000 to the city. It will also keep in cooperation between departments that are already in place, such as the boundary drop, and the joint personnel training services to name a few.

“The alternative is … to continue the nationwide recruitment for a separate fire chief,” Kenley said.

Vice Chancellor Meyer added that, given the joint ambition the City of Davis and the University have for growth, a coordinated fire management would make preventative methods for safety easier and make for a “cleaner” conversation between the two entities.

The status quo, however, for the management of the CDFD has been a series of interim Fire Chiefs. The current one being Police Chief Landy Black, who was named Public Safety Director of Police and Fire in February 2013.

“The fact that it’s taken a few months [to come to a decision] is undoubtedly unsettling. It’s important, however, to acquire a more patient response, as we have discovered no lapse in public safety in terms of boundary drop,” Black said.

The decision has marked an attempt at a solution to an ongoing struggle in the face of the changes the Fire Departments have gone through in the last year. It is still met with some controversy.

“I support an autonomous City Fire Department…I have issues concerning respect…I’m not sure [the UCDFD Chief] will get the respect from the City Fire Department. There is a lack of credibility…the previous interim chief did have credibility…it’s important to get someone from outside…The next question is where does it stop? There is a consistent movement towards consolidating departments and I don’t know if it’s the right time for this one,” said City Council member Lucas Frerichs.

Still others believe this decision may be a step in the right direction for the CDFD. Mayor Joe Krovoza commented just prior to moving forward with the motion, “It seems there is room for autonomy but hope for unity.”