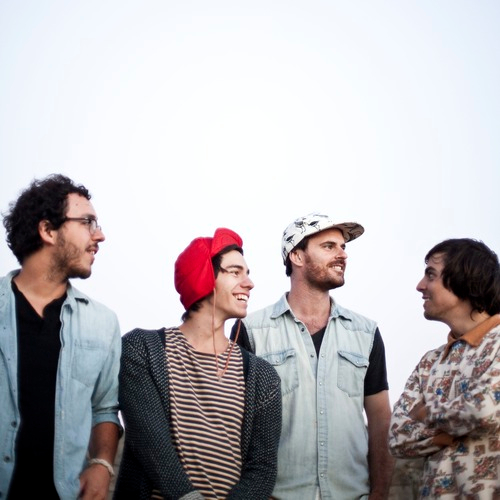 MUSE: Tell us about the formation of the band.

HUERTA: My brother and I [began the band] in a really small town called Ripon, Calif. We started writing in our home. I found another guitarist [Mackenzie Bunch], then my brother [Thomas Huerta] joined and he played bass. Then we found a drummer [James Gallagher] and we moved to San Francisco. We gigged around here a lot.

What made you settle in San Francisco?

We were playing the same three coffee shops over and over and we just knew we had to get out of Ripon. There was a surprisingly good music scene at the time and it was a great community. All my friends were super talented and encouraged each other, so we moved to San Francisco. Two of the members also went to San Francisco State.

What’s the story behind the name French Cassettes?

We used to be called The Lite Brites in high school, in 2006. We had to think of a new name and the truth is we spent more time thinking of fake stories than the name. We were just kids sitting around. We came up with all these crazy stories, none of which were true.

How would you describe your style of music?

Anywhere online it’ll be under indie rock. We basically want to kind of expand. We wanted to write indie music, which is a gamble, but we also wanted to make it danceable — not like cheap dance, where you throw a beat on it — just interesting ways to get people to move. We love the technicality. We wanted to do that instead of straightforward chords, we wanted everyone to really focus on their own parts and get better with each song.

How did your recent John Wayne tour go?

Fantastic, it was great. It makes a huge difference if you treat yourself to a little vacation each year. We’ve done [the tour] before and we got a really good response over in Texas. Mac’s parents live in Arizona so we had a resting spot on the way. Lots of people bought CDs and offered places to stay. Touring is my favorite thing to do and it solidified our live set.

Tell us about your first album, Gold Youth.

[Gold Youth] is our first full-length album. We had an EP out before that really got it going for us and got our confidence built to come out with another. We spent a year writing these songs, a really long time for us. The recording process went by really well and we released at the Great American Music Hall here in San Francisco. It’s got a really good buzz and helps get our name out there. I’m really proud of it.

We’ll play almost all of the album [at the Quad show]. My favorite would be the first, “Us Kids.” That one was a whole day writing in the garage and we were really excited. Everyone wrote their parts, Mac wrote the chorus and I wrote the verse, it was kind of a proud parent thing.

Which other musicians have inspired you?

From 2000 to now I’ve only listened to like three different bands. I listen to The Strokes and Pixies and my all-time favorite was Electric Light Orchestra. Anything with good composition.

What has been the most memorable moment for the band so far?

Probably the most emotional one for me, I’ve been with the band forever and it means a lot to me, was this one time, when we were 18, and we played this battle of the bands gig. The stadium was like 1,000 people and we competed and it got narrowed down. We ended up getting first place. That was a big moment that meant a lot to me.

What are your hopes for the future?

We want to tour independently. I really want to do a sort of retreat and bond that way and work on new stuff together. I would love everyone to bring songs to the table. I don’t want there to be “key” songwriters and I want to be able to travel.

French Cassettes will play at the MU West Quad on April 14 at 12 p.m. The event is hosted by ASUCD Entertainment Council.