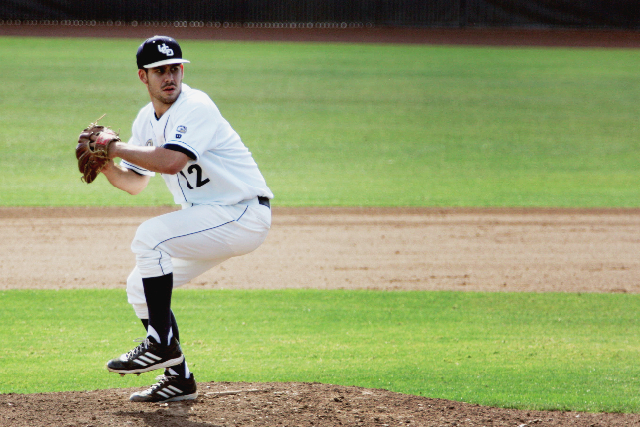 Coming off a rough week, which included losses to Sacramento State and a series sweep on the the road against UC Riverside, UC Davis snapped a four-game losing streak against the Saint Mary’s Gaels.

Redshirt sophomore, right-handed pitcher Max Corby (1-3, 4.80 ERA) pitched a gem for the UC Davis Aggies, striking out 11 of 26 batters faced. Corby only allowed one run and one hit throughout seven innings. Although Corby did not record the win, he led the Aggies to the win that broke a four-game losing streak.

Without two of their best hitters in the lineup, seniors Adam Young and Steven Patterson, UC Davis still managed to get on base early.

The Aggies threatened to score early in the first inning after junior Kevin Barker hit a line drive down the center field gap and sophomore Tanner Bily and redshirt junior Tino Lipson walked. UC Davis, however, failed to score with bases loaded as senior Spencer Brann grounded out the Gaels’ second baseman.

Saint Mary’s took a 1-0 lead off a double steal in the third inning, the Gaels’ Anthony Gonsolin stole second as the throw to second base by sophomore Spencer Henderson was late and Ian McLoughlin stole home.

The Aggies tied it all up in the sixth inning with a line drive to left field by senior catcher  Brann that brought in Bily home from second base. Brann extended his hitting streak to six games.

With the game tied at one apiece in the eighth inning, Saint Mary’s pitcher Jacob Valdez (1-4) hit Barker with a pitch, sending him to first base. Junior Nick Lynch bunted towards the first base line and moved Barker into second. With the winning run in scoring position, Bily hit a line drive through the right infield gap, allowing Barker to score.

Valdez was later relieved by Brad Neese, who struck out Lipson, while pinch-runner, junior John Williams stole second base. Brann hit a triple to deep right field and batted in Williams, who had advanced to third after a wild pitch, to expand the lead to 3-1.

The Aggies’ right-handed pitcher, redshirt junior Raul Jacobson recorded the win, improving his record to 4-0. True freshman Zach Stone earned his ninth save of the year. UC Davis improved to 17-20 overall after the win.

After struggling in his last outing against Sacramento State, Corby proved his ability to make adjustments and bounce back after a bad performance.

“This weekend I spent some time, looked at some video, tried to diagnose some problems and, you know, just looking for anything mechanically cause it’s not a mental problem, it’s just something mechanical,” Corby said.

The Aggies win the season series against the Gaels. The last time they went head-to-head, UC Davis won, 4-1, on April 2 in Davis, Calif. Prior to that win, the Gaels defeated the Aggies 5-1 on Feb. 20.

The Aggies return to conference play on April 25 at 2:30 p.m. as they face the UC Irvine Anteaters for a three-game series at the Dobbins Baseball Complex in Davis, Calif.