UC Undergraduate Experience Survey to donate $1 for every completed survey 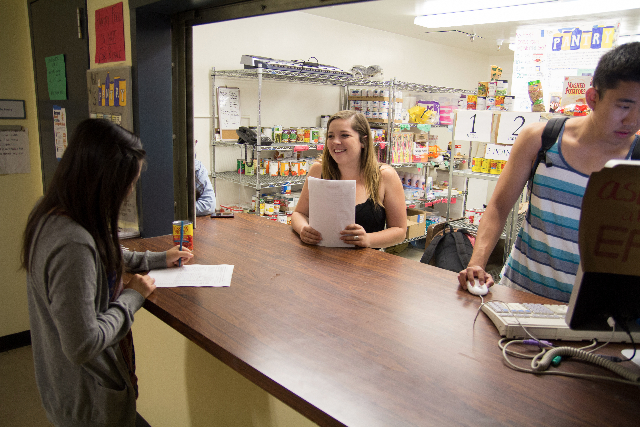 For every University of California Undergraduate Experience Survey (UCUES) completed between May 20 and May 30, UCUES will donate a dollar to The Pantry, the student-run food bank located in Lower Freeborn. The collaboration was in response to the high statistic of students who frequently skip meals because they cannot afford them as indicated by previous surveys.

The Pantry was created in 2011 in response to the previous year’s statistic. It is an ASUCD unit that provides free food and personal hygienic supplies to students in need and is open Monday through Friday from 9 a.m. to 11 a.m., and Monday through Thursday from 4 p.m. to 6 p.m.

Shinna Kim, unit director of The Pantry, said the stagnant statistic shows that student hunger is still a prevalent issue on campus.

“We’ve used that statistic since the very beginning and every year we ask for an updated version and every year we realize the same number of students are struggling, the same number of students are skipping meals,” Kim said. “And that’s a good reminder for us to keep doing what we do and a really good reminder to tell our community members that the need is still present and the combat against student hunger is very much present right now.”

According to Gillian Butler, Student Affairs Research and Information lead analyst, the collaboration was a way to both increase student responses to the survey and also raise funds for The Pantry and reduce student hunger on campus. Butler chose The Pantry due to the personal connection she felt as a hungry student when she was an undergraduate as well as The Pantry’s relevancy towards a wide population of the campus.

“We were trying to think of what we could do to get more of students to respond and I had been thinking for some years of trying a charity incentive because people will do things for other people that they won’t do for themselves,” Butler said.

Butler said the money for the donations will be taken out of the University’s budget.

Tara Storm, director of internal operations and upcoming unit director for The Pantry, sees the collaboration as an important way for students to engage in philanthropy while providing information for the University.

“I think it’s important because I think philanthropy is important,” Storm said. “I think getting the students to answer the survey while having a philanthropic cause is really important because the survey asks a lot of important questions. This survey is one of the reasons The Pantry exists because we found out there’s a statistic that one in four students are skipping meals frequently because they can’t afford them.”

In addition to the survey, The Pantry will hold a canned food castle competition on the Quad from 12 p.m. to 2 p.m. on May 30 in order to celebrate the last day of donations. Afterward, the cans used for the competition will be donated to The Pantry.

According to Butler, 2010 was the first year UCUES added questions concerning students’ financial situations after the increase in tuition. Butler said the percentage of students skipping meals to save money hasn’t gone down because of the difficult economy and student tuition remaining high.

“I don’t think the economy has gotten better from what it was and tuition certainly hasn’t gone down,” Butler said. “In terms of the economic situation that most of our students are in, it just hasn’t changed very much.”

According to Butler, UC Davis is the first UC to adopt a collaboration of this sort. She said that if it is successful, it is likely that UC Davis and other UCs will repeat it in the future.

Patrick Sheehan, student assistant to the chancellor who played a part in bringing this need to the administration, agrees with Butler and hopes to see more charitable collaborations in the future.

“It seems like a fantastic way to incentivize participation and I hope these charitable incentives will become a trend for future surveys,” Sheehan said.

In the first two days of the survey, UCUES raised $376. While the amount is far from The Pantry’s goal of $5,000 by the end of the period, Kim sees this number as a huge donation towards The Pantry.

“Within the first two days we have 376 students who have taken it, that’s $376 that could go to The Pantry, which is equivalent to maybe 2,000 cans of food for students,” Kim said. “That’s a huge deal for us.”

However, Butler sees the amount as disappointing and hopes to see a huge increase by the end of the period.

In addition to The Pantry, this is the first time UCUES has partnered with Creative Media, who has created a social media campaign to publicize The Pantry’s collaboration.

After working closely with The Pantry as one of her adopted units, ASUCD Senator Mariah Watson sees the collaboration as an important move by administration towards an end of student hunger. She encourages students to take the survey.

“This survey is one of the most amazing things that’s ever happened to The Pantry. In my first year, I saw that unchecked hunger was one of the biggest issues that faced our campus yet no one talked about it,” Watson said. “I’m just so thankful that administration is really starting to see this as an issue on campus and wants to begin addressing it through monetary means.”

Butler sees the collaboration as a meaningful way for administration to work with students. She views student hunger as an obvious issue that people need awareness of.

“I think it’s always good when we collaborate with our students. It’s too easy to sit up here in Mrak and lose track of who it is we’re supposed to be serving out there,” Butler said. “It’s important that our students can concentrate on their studies instead of worrying about where their next meal is going to come from. In that particular collaboration with The Pantry, that’s a slam dunk as far as I’m concerned. It’s the basics.”

Students can take the survey at http://ucues.ucdavis.edu/.

JASON PHAM can be reached at campus@theaggie.org.