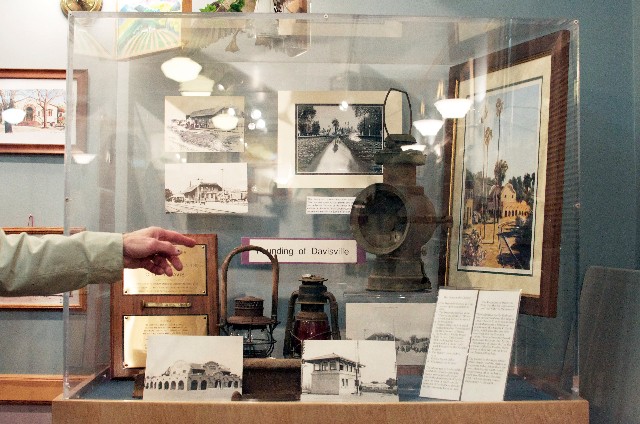 A little over a year ago, a man carried a 89-pound iron ball into the Hattie Weber Museum, located on C Street in Downtown Davis.

The iron ball had sat atop Davis’s first water tower, previously functioning as a lightning rod. The man’s father-in-law, who was moving to a rest home, told the volunteers at the museum that every Fourth of July, the Davis Fire Chief would crawl on top of the water tower, grab the iron ball and stand on his head to the general cheers of the masses below.

This iron ball is just one of many curious artifacts donated to the Hattie Weber Museum. Situated in the corner of Davis’ Central Park, the little building exhibits a wide range of objects that each hold a little piece of Davis’ history: a locked safe that not even an expert could open, a quilt made during the Civil War, a till from the 1920s that can ring up no more than $9.99 and creamers from when UC Davis first started out as a farm school.

“People come by and donate the strangest things. I think the top of the water tower is one of the most interesting things we have gotten,” said Dennis Dingemans, a retired UC Davis geology professor and volunteer director for the Hattie Weber Museum.

The museum is housed in the building of the old Yolo County Library and is named after Hattie Weber, the first paid librarian in Davis, then Davisville. When Weber started working in 1906, the library only had 200 books; when she retired in 1953, it had 23,144.

“The Webers owned a saloon in town, and Hattie was the youngest and most beautiful of the three Weber girls. She never married because nobody was good enough for her,” Dingemans said. “She was famous for being cranky in her old days. She was strict and she knew a lot.”

Other than housing a variety of historical artifacts, the Hattie Weber Museum also occasionally participates in the Davis ArtAbout, a monthly event dedicated to viewing local art galleries.

Merrily DuPree, a researcher and supporter of the museum, said they decided to partake in last Friday’s ArtAbout since they were featuring watercolors done by local artist Betty Berteaux. Five of Berteaux’s watercolors are featured in the museum’s permanent collection and many of her paintings are of local landscapes. One of her most recent projects was sketching of all the olive trees lining Russell Boulevard.

“What I thought was, ‘I should document these trees,’” Berteaux said. “So I started on the north end and I worked my way down.”

In total, Berteaux estimates she drew around 200 trees. The project lasted several days and the results were showcased in a few sketchbooks displayed in the museum. By now, Berteaux has gotten her technique down and recommends that the novice-olive-tree-artist begins with drawing an olive tree’s negative space.

Other than providing art for the museum, Berteaux has been a member of the Yolo County Historical Society since 1972. The Historical Society is also the organization that operates the museum, previously located on F Street. Her husband gave a helping hand in the design of the new and improved location, which volunteer DuPree says is one of the reason people are so drawn to the place.

“People come in here because they are interested in history, but they end up liking it too,” DuPree said. “I think it’s a really good place to get a vivid sense of Davis’ history. It’s a really welcoming place.”

As a researcher for the museum, DuPree looks further into interesting subjects by digging into archives and reading old newspapers. She is currently working on a project that involves the Schmeiser family, famous German pioneers in Davis during the early 1900s.

The most notable artifacts left over from the family were letters from the family’s daughter, Pauline Schmeiser, whose photo also hangs in the museum. Most of the letters were from a trip she took to Europe in 1903, all of which were addressed back to Yolo County.

DuPree transcribed many of the letters and hopes to publish a piece in an upcoming Yolo County Historical Society’s newsletter. For now she is also focusing on the museum’s current collection of quilts that are on display, ranging from the Civil War era to the 1950s, and helping out with community events like the ArtAbout.

The museum has approximately 3,000 visitors per year, most of whom come on Saturdays. While there are a few Davis families who are regular guests, most of the visitors are not Davis residents.

“The museum is rarely visited by college students, and if it is, it is mostly because their parents are in town and going to a museum seems like a good, cultural thing to do,” Dingemans said. “Most of the visitors are people from out of town — old students or people who are visiting relatives in Davis. We also have quite a few international visitors. Last year 35 countries from six different continents were represented.”

Dingemans explained that when long-time Davis residents visit the museum come for the first time, their most typical reaction is: “Why didn’t I come here earlier?”