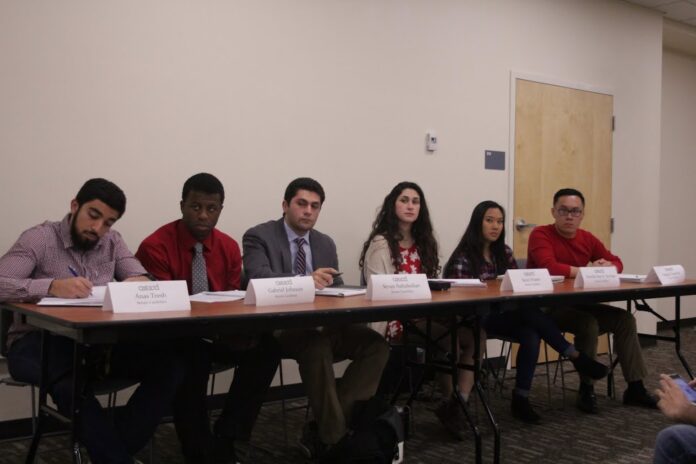 In lieu of the traditional ASUCD CoHo debate, co-moderated between the Elections Committee Chair and The Aggie’s own Campus News Editor, the committee set up a candidate forum, held tonight, Feb. 17.

Anyone could submit questions for the candidates via the election website: https://elections.ucdavis.edu. All questions were filtered by the Elections Committee and Wu, who chose which questions to ask.

Candidates answered questions regarding ASUCD’s budget, their respective backgrounds, the relative lack of interest in this election and other topics.

The senate candidates, Miguel Guerrero, Danielle Santiago, Sarah Priano, Sevan Nahabedian, Gabriel Johnso and Anas Tresh, spoke from 7-9 p.m. on the second floor of the Memorial Union, followed by the only executive ticket, composed of Mariah Watson and Robyn Huey, who answered questions from 9-10 p.m.

Five of the six senate candidates, in addition to both executive candidates, are running on the S.M.A.R.T. slate, meaning that S.M.A.R.T will control eight of the 12 senate seats and also the executive team next quarter.

Elections are taking place now until Friday, Feb. 20 at 8 a.m., and UC Davis students can vote at https://elections.ucdavis.edu.

Scott Dresser can be reached at campus@theaggie.org.