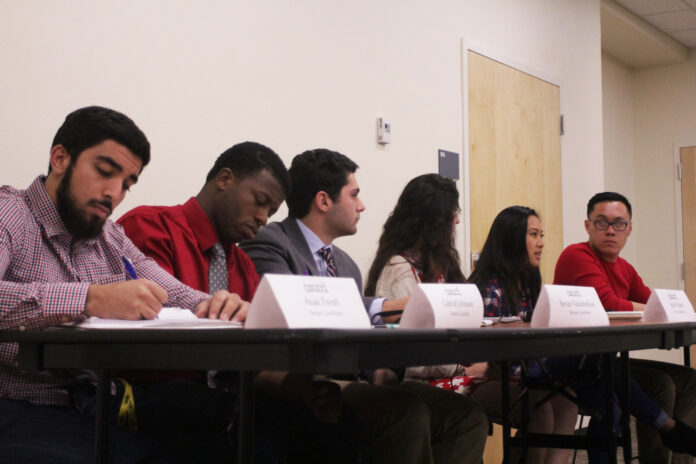 On Feb. 18, UC Davis students and the UC Davis Police Department held the year’s second community forum titled “Problems, Processes, and Procedures.” This forum aimed to discuss external and internal procedures when police officers interact or have contact with students.

This was the second forum in a student-initiated forum series created in collaboration between students and the campus police department. The first forum, “Police Conduct and Police Misconduct,” was held Jan. 7. According to UC Davis Police Chief Matt Carmichael, the forum series is a response to recent national incidents of police misconduct.

“It’s [a way] to be visible to the community when things aren’t wonderful,” Carmichael said.

After the facilitators introduced the campus leaders in attendance, the forum began with a small group discussion. Students could write questions for police officers on an index card and then ask their questions to the police officer at their table. The forum then transitioned into a large group discussion, in which students were given the opportunity to address their concerns and receive answers directly from police officers. Anyone who asked to speak or who responded to a question was given a two-minute time limit in order to ensure that everyone would have a chance to be heard.

Topics discussed included police training in relation to transgender issues, the preferred names program and a person’s rights when he or she is detained. Racial issues made up a large part of the discussion as well, with students calling on the police department to become more aware of subconscious racial biases.

An additional recurring discussion topic was the need for increased visibility of the police department on campus. Many students said that police officers should become more involved with on-campus events and should interact more with students in order to form a better relationship between police officers and students.

Carmichael believes that these forums are essential to improving the relationship between the police department and the community and said that he wants to answer any questions that students may have. In addition to the continuing forum series, Carmichael said that the police department is working on creating an online thread where police officers can answer questions that they are unable to get to during the forums.

Chief Carmichael plans on continuing the forum series beyond this inaugural year.

“This community forum should take place forever,” Carmichael said. “It should never end. Our student population changes every year. This is an endless series.”

Watson agreed that the forum series is chance to create further understanding on campus.

According to Watson, the next forum will be held by the first week of spring quarter or sooner.