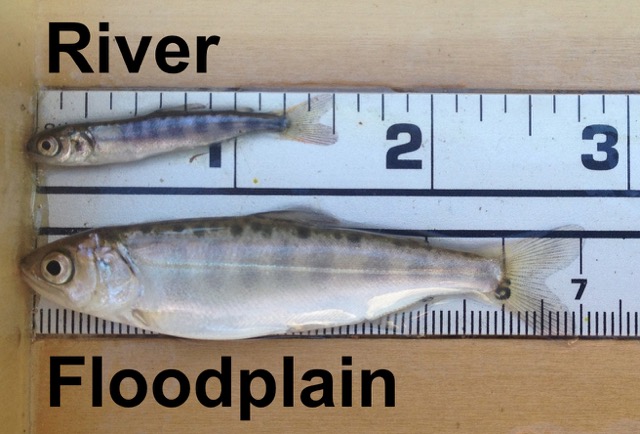 Agriculture is a water dependent industry that has faced challenges posed by the current drought. The Nigiri Project, a pilot study involving researchers from UC Davis, examines how flooded rice fields can be used to create wetland habitat to raise salmon. This technique capitalizes on water that is already being used for farming. After years of research on hatchery fish, the project is looking to find ways to get salmon from rivers onto the rice floodplains.

In 2011, the Nigiri Project was started on Knaggs Ranch in the Yolo Bypass, a flood bypass in the Sacramento Valley located in Yolo and Solano Counties, to investigate the potential use of rice fields to raise salmon and restore its population. Historically, the Sacramento Valley would naturally create wetland habitat in the winters due to flooding. The Yolo Bypass was created to reduce flooding and allow the land to be used for agriculture.

After levees were built in the Central Valley in the late 1800s, large floodplains were reduced to narrow streams of water that move rapidly.

“Ninety-five percent of our floodplains are gone and very few natural floodplains remain. If we are going to have that productivity that once fed our ducks and geese and fish populations, it’s going to have to come from the agricultural fields which have replaced the floodplains, and for the most part that’s rice fields,” said CalTrout Central California Director, Jacob Katz.

Restructuring water flow reduces the opportunity for algae to grow by diminishing the water’s surface area and thus, reducing the water’s exposure to sunlight.

UC Davis Professor of Fish Biology, Peter Moyle, explains that small water fleas and zooplankton feed on the algae blooms and then salmon feed on the the zooplankton. Flooding rice fields mimic the natural floodplains that would historically form in the area and allow for more algae to grow.

“Historically…every year the water would spill out of that flood plane to a greater or lesser degree and it would sit out there in ponds on the surface of the land. That water would then produce high volumes of zooplankton and the salmon were adapted to that,” Moyle said.

He adds that the abundance of food, paired with the relatively warm temperatures of the fields, allow hatchery released salmon to grow much faster.

“[The Zooplankton] are tiny but there’s just millions of them very concentrated in these ponds out there. So the salmon can just open their mouths and have food practically swim in it,” Moyle said.

The Yolo Bypass connects to the Sacramento River and eventually feeds into the  Sacramento-San Juan River Delta. An overview of the first year of the Nigiri Project’s pilot research shows that after only six weeks in the floodplains, juvenile fish grew, on average, to 5-times their original weight and 1.5 times their original length.

Katz explains that in the summer productive rice fields can be used conventionally for the productive growth and harvest of rice. In the fall, however, after the rice has been harvested, it can be flooded to create surrogate wetlands habitat.

“That multi-benefit management really allows us to get the most benefit possible out of limited water usage, and that’s what we’re trying to do, is get the most pop-per-drop, get the most productivity, both agricultural and wildlife, off of these farms,” Katz said.

Emily James, sales and logistics manager for Robbin’s Rice Company, explains that turning rice fields into wetland habitat in the off-season generates additional income for farms. She states that, due to concerns about air quality and pollution, rice farmers are no longer allowed to burn their fields at the end of the season and are thus forced to flood the fields.

“That flooded field provides excellent habitat and we usually do it for duck hunting and then a couple years ago we were working on pilot studies to see the benefits for migrating shore-birds since the Sacramento Valley is on the Pacific Flyway,” James said.

She adds that the both the marketing and financial benefits of the floodplains make it very attractive to farmers.

“On the marketing side we, and all the other rice farmers in the valley…have gained this huge push to make seasonal wetland habitat available for multiple species across the entire industry. There’s been a really great response and that way we can receive payments that offset the costs of flooding the fields, which we already have to do,” James said.

James explains that Robbin’s Rice Company is creating a private certification called Water Bird Program that the company will stamp on their products. The certification will inform consumers of the company’s environmental focus on air, soil, water and habitat.

After four years of research and support from farmers, the team involved with the Nigiri Project is looking to apply the knowledge they have learned. According to Moyle, they are looking to get salmon onto the floodplains from the rivers instead of from hatcheries.

“What we would really like to be doing is starting to pivot away from the strict research and starting to look at how that research is implemented to get large numbers, millions, tens of millions, of fish out of our rivers and out onto our floodplains,” Katz said.

In order to do this, Katz explains that California must first focus on updating its water infrastructure and technology.

“This is California where we think of ourselves as technologically savvy, Silicon Valley is the tech hub of the world,” Katz said. “We update our phones every year, but we really haven’t updated our water infrastructure technology since before the invention of the telephone…we are never going to solve 21st century problems with 19th century technology.”

Photo Credit to Carson Jeffres of the UC Davis Center for Watershed Sciences.