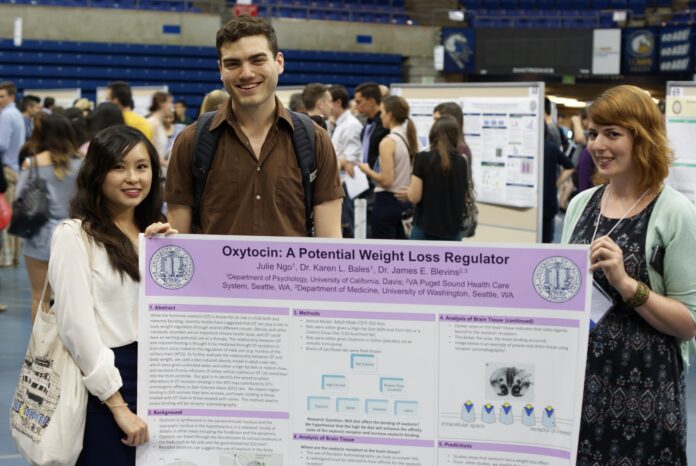 The 2015 Undergraduate Research Conference took place on May 1 and 2 at the ARC Pavilion and Wellman Hall. Every year UC Davis undergraduate students from a variety of academic fields come together to share and discuss their research via oral and poster presentations.

“Half of what I’ve been doing is encouraging interclinic collaboration. We’re a bunch of free [on-campus] clinics and we have very limited resources, so sharing those resources should be something that we should focus on. The other half of it is getting feedback from the patients: What are the patients going through to obtain health care? Are there any obstacles, such as transportation or them not affording their diabetes medication? So we developed a patient survey that we passed out to six clinics. The survey contains questions about demographics like language, ethnicity and education level, as well as questions that give patients the opportunity to lend their voice and tell us what services they want offered at the clinics more, if they think things can be done more efficiently or if they just want to share their appreciation. We’ve been collecting data for over a year now, over 850 survey results, and we’re still collecting data. I think founding the Interclinic Consortium also really helped with this project because it really melded the clinics together and [helped them] see there really is a benefit to working together despite being different target populations.”

“I used to work in Bayanihan Clinic, one of the nine student-run clinics. I served as both a volunteer and a board member so I got to see the behind-the-scenes to make sure we had all the resources. There was also a personal interest, as at the time I was taking a medical anthropology class and that opened my eyes to start thinking outside of the box. During that time I realized that while talking to a friend who worked at another clinic…we were all on the same street, but we had never talked about working together. In short, the clinics were very segregated, very independent. All the clinics focus on different target populations, but it didn’t really make sense to me that there was no interclinic collaboration.”

“Starting it was definitely a challenge. Going to all the different clinics and pitching the project and making them more receptive to the idea of a research team coming over and taking surveys was challenging. Another part was changing the idea of clinic culture. Some of the clinics are well established and have been around for a lot of years, so changing that mentality of just working together was a bit of a challenge for all the clinics. Some of the ideas of the Interclinic Consortium were having all the clinics come together once a month and share the challenges we face. It’s been improving and the clinics have definitely been working together a lot. I’ve been with the clinics for five years, but seeing the clinics grow, create new programs and use some of the data to shape what kind of programs they want implemented and seeing the data represented to the changes they made in the program has been really rewarding.”

“My research is through Dr. [Karen] Bales in the Department of Psychology and we look at oxytocin, and how it can be a possible weight loss regulator. So we’re looking at how diet can affect oxytocin receptors in your brain, which is a way for us to look at oxytocin as well. We altered rat diets and froze and sliced their brains to observe.”

“It was really hard to learn the skills. In my particular project, we’re slicing brains, and it’s very fine tissue and it’s frozen, so it’s very specialized. It took a while to get used to it. I’ve maybe done 60-100 hours of slicing so far. I’m slowly getting better at it, so it’s like a learning process. I work with titi monkeys in the cage and you actually get to interact with them. There were times when I’d get to hold hands with the monkeys and it’s really cute.”

“I would say [that] they don’t settle. Find something that is related to what you are interested in. Also, it is possible to find a little bit of something you like in every lab. It’s possible to see a lab as a stepping-stone. Maybe you’ll do data entry in the beginning, but the next quarter you could do something more that relates more to you.”

“The purpose of my research is to figure out which types of designs of reflective clothing for biking at night are the most visible or the easiest to detect or recognize. I’m using 3-D eyeglasses and I’m going to use these for an in-car study. I’m going to have participants come, they’re going to sit in the passenger seat of the car and I’m going to track exactly where they’re looking out the front window. I’m going to have an assistant biker in different situations and test which one is more visible at night. The quantification of it is the amount of time the passenger looks at it. It’s all based off of this thing called biomotion, a perceptual phenomenon where if you highlight major joints of the body. It’s actually a very intrinsic response for humans to notice it’s a human. Just the locomotion of the bike peddling and the legs, that versus a vest is way more significantly recognizable. It’s already been shown that biomotion is significantly more visible at night, but there’s a gap between 3D eye tracking where you have to sit and watch a video and between actually being in a car but then just telling when you see the bike with a stopwatch. So I’m trying to bridge that gap.”

“I was actually recommended by a professor. I told my design professor, Professor Housefield, that I was interested in eye-tracking and design, and he recommended me to a professor who’s doing fashion design with eye tracking. That immediately got my attention. So I went and talked to her about her idea and I loved it and I’m actually going to do it for my honors thesis next year.”

“I would say talk to professors as much as possible. Just go to their office hours, even if you don’t have any questions, and express interest in whatever research interests you. Be with them [and] get to know them because they’re people too.”

“Okay, so what’s the problem? Every quarter we have TAs, and we have a certain amount of sections. There’s a lot of paperwork before each TA gets placed into a section. So this TA, he has preferences about which sections he wants to teach, he has a calendar of courses he has to take and he has a ranking given by the department. All these things need to be accounted for in terms of when we sort these TAs into these sections. What happens right now is that a person from the faculty will take all this written information and try to manually assign them to these sections. As you can imagine, this takes a lot of time. They sit down and they do this for a few weeks. And the problem is the solution they come up with is not always optimal. We modeled ‘TA happiness’ with a function. You have all these variables—TAs, sections, class conflicts and TA ranks, in one function, the objective function. You want to maximize the function for the highest possible value of happiness. We found a way to do this with integer linear programming to help us find the maximum in an area determined by linear constraints. This model allows us to do complicated math that is beyond two dimensions quickly. We implemented this model in code and created a website for TA’s and faculty that would do this in a matter of minutes. It went from nine to 10 weeks of faculty having to assign TA’s to a few minutes of just clicking a button. Because this is the optimal value, they could switch sections, but they wouldn’t be any happier, so we basically solved the problem.”

“I’ve been working with a professor and his concentration is optimization. He kind of turned us on to this project by giving us a real life application of these concepts. Being both computer science and mathematics majors, I can think about it and implement it so people can use it.”

“The hardest part was definitely coming up with the math behind it, the reasoning and whether or not it’s going to be feasible and actually give us what we want. It’s rewarding that we built something that helps people, something that people actually use. Currently both the math and chemistry departments are using this to place TAs, so that’s something we’re proud of.”

“My work intersects with painting and semiotics, the study of science and symbols and their use or interpretation. It’s essentially the study of how we give meaning through words and how words evoke meaning. The titles of the pieces themselves are all phrases from my everyday environment, from friends, from strangers, from anywhere. Some people spit out gold. Then I try to evoke these phrases and their meaning through the formal qualities of the painting. For example, when I think of the phrase “relationships are like sandwiches,” I think of something very layered. They have a lot of ingredients and when they come together hopefully they make something good. The form of this piece reflects that. Visually it represents sedimentary layers, and the tactile is like toasted bread here and the text is like mayonnaise. It’s the relationship of language, painting and touch.”

“The research. I’m a traditionally trained person so I can paint all these things, but how do you deal with something that’s so conceptual? That was very challenging, just putting all the information I researched into a one-page proposal to a group of judges. Meeting the deadline and getting all this work done in time has also been stressful. But the most rewarding [part] has been talking to people about it, seeing it up somewhere and people engaging with it, because otherwise all this work would just stay in the studio where no one’s looking at it or asking me about it. Once it’s out here, it has a life. And being here with the science majors and having people who don’t have an art background come and enjoy this is great.”

“For the arts, I’d definitely say start early. I needed funding to get this done. Art materials are expensive, and the grant proposal is what allowed me to do this project. It’s important to have a vision and execute it. Who doesn’t want someone to support and fund their work in the arts? Otherwise it’s just an idea that doesn’t really take shape.”