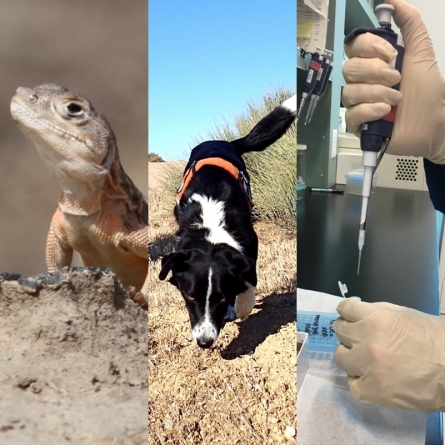 In a novel study, specially trained detection dogs sniffed out the scat of endangered lizards, including the blunt-nosed leopard lizard, in the San Joaquin Valley. After four years of collecting samples, UC Davis researchers used a newly developed technique in genetic analysis to identify species based on the scat. Through a collaborative effort between UC Davis genetic researchers, the Bureau of Land Management (BLM), U.S. Geological Survey and Working Dogs for Conservation, this new method provides a successful, noninvasive way to strengthen reptile conservation, according to Mark Statham, an associate researcher in the veterinary and genetics lab.

The use of detection dogs for conservation is not completely new. In previous studies, detection dogs have located scat for other endangered animals such as bears, foxes and gorillas. Before this study, however, the dogs had never been used for reptiles in combination with genetic analysis to identify each species of lizard, Statham said.

“If you want to see where a wild animal has been, one of the easiest ways to find that out besides footprints is picking up feces,” Statham said. “It is a very common technique for mammals but it had never really been used for lizards. The combination of the two things, the scat detection dogs and the genetics for the lizards, that combination is brand new.”

The main lizard the study focused on, the blunt-nosed leopard lizard, is endangered and only found in California’s San Joaquin Valley. As the area is prized land for agriculture and urban development, the lizards must compete with humans for space and, because they are small and difficult to track, researchers sought out a new method to study them, Statham said.

“I’d really like to see this being used as a new tool in the toolbox for people studying species like this,” Statham said.

Detection dogs could not have been previously used for lizard identification because no genetic method for identifying species by scat had been developed. For this reason, Statham and his team were tasked to develop a method and it proved to be successful. Their results are documented in a study published in the “Journal of Wildlife and Management.”

“We needed to get a genetic technique so once you get the fecal sample, you can specifically identify which species it was,” Statham said. “That was the whole purpose of this. That was the unique combo of techniques, field personnel and dogs and genetic analysis.”

Four out of the six lizard species that reside in the area were identified in the genetic analysis. After taking 327 samples across four years, the team confirmed 82% of them were from the blunt-nosed leopard lizard.

For now, the genetic method can only identify the type of species, not individual lizards.

“I made separate different markers that stick to the specific species’ DNA,” Statham said. “The fragment that sticks to the DNA is fluorescently labeled so it glows. Through a combination of fragment length and fluorescence, I can identify the lizard species.”

In the future, Statham wants to complete additional analysis to differentiate individuals within the species.

“With the test we have developed so far, that is useful for differentiating between lizard species but we’ll have to do different analysis to identify individuals,” Statham said. “If we can identify individuals, that opens up a host of other questions we can answer, like trying to census the population.”

The work was primarily funded by the U.S. BLM, Westphal said.

“The BLM provided funding for the study; provided permitting for collecting scat from captive lizards; provided access to BLM lands and other logistical support, and contributed expertise at each phase of the study including methodological design, execution in the field, and writing the manuscript,” Westphal said.

Detection dogs were instrumental in the study’s success because humans alone cannot locate the lizards’ scat. Because the scat is only a couple of centimeters long, about the size of a grain of rice, and blends into the sandy ground, humans would struggle to efficiently locate the scat, said Kayla Fratt, the communication and outreach coordinator for Working Dogs for Conservation.

“[The dogs] are much more efficient at picking up the scat and they can cover a wider area than humans,” Statham said.

Working Dogs for Conservation provided dogs for the sample collection. The organization rescues dogs and retrains them to become detection dogs for conservation purposes. Scientists, government agencies and nonprofits contact the group to use their dogs. Usually they will accept the project as long as it relates to conservation biology, according to Fratt.

“These projects can be related to endangered species, invasive species or wildlife crime,” Fratt said. “We work all over the world. If someone has a scent and are having a hard time finding it, we can help out.”

The nonprofit trains the dogs to sniff out and find whatever it is that needs to be found, Fratt said. The dogs are trained to know that whenever they find the smell in question, then the dogs are rewarded with their ball.

“We rescue high energy, ball crazy dogs as well as get them from career change organizations,” Fratt said. “We want dogs that are very, very obsessed with balls and toys. These dogs tend to be bad pets.”

Working Dogs for Conservation looks for dogs between 18 months and three to four years of age because that is when they are easiest to train. The group does not care about accepting certain breeds, but Fratt said that most tend to be Labrador retrievers, German shepherds, border collies and more.

“We are mostly looking for dogs that have nerve strength and courage, we want them to be ball-obsessed, and to be able to keep up with fieldwork that we require,” Fratt said.

With the collaboration between the BLM, U.S. Geological Survey, Working Dogs for Conservation and UC Davis, a new non-invasive method has been developed for reptile conservation and animal tracking since no animals need to be captured, said Ben Sacks, an adjunct professor in the department of veterinary genetics.

“The new methods developed will allow scientists anywhere in the world to non-intrusively collect and extract reptile DNA from feces for the purposes of population monitoring, risk assessment, and pure research,” Westphal said. “Reptiles are ectotherms and highly vulnerable to climate change, and collecting reliable population data from vulnerable populations without intruding on the species in question will be crucial to their conservation.”