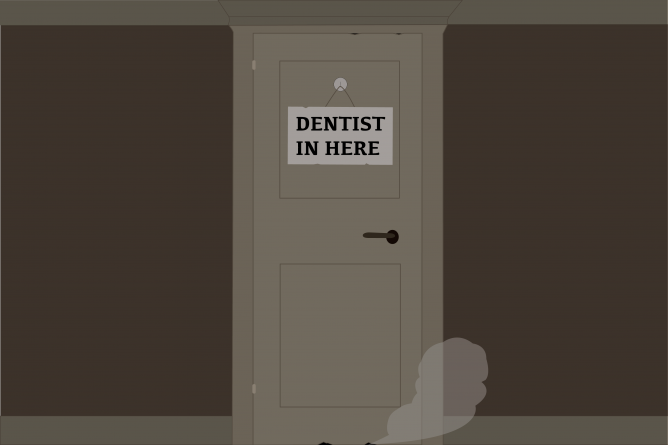 If UC Davis students want to forgo sky-high insurance premiums, or if they simply can’t be bothered to clean their own teeth, his door is always open and smelling somewhat weird.

Kylie Betterson, a first-year English major, had four of her wisdom teeth taken out by Miller. When asked to describe her experience, the brave soul shrugged.

“It was hella dark in there,” Betterson said. “He had me lie on his bed and used his lava lamp to look inside my mouth. He told me to sniff sharpies instead of anesthesia. Weird s**t, but it worked.”

The California Aggie got an insider’s look at Justin Miller’s makeshift office. Reporters noted his unusual choice of dental instruments: rusted tweezers for extractions, an unidentifiable bag of powder for whitening treatments and an empty Four Loko’s can filled with old teeth.

The dorm was lit only by several harrowing lava lamps, and his roommate was nowhere to be found. The bed was empty, with no trace of his absolutely alive — and totally not dead — roommate Carlson. Miller only laughed when asked for further information about Carlson’s whereabouts.

There is a waiver patrons must sign before Miller can operate. The 40-page document is a Doodle poll where patients consent to the possibility of a painful procedure. But this is to be expected when an 18-year-old stoner’s fingers are in your mouth.

The waiver discloses several potential dangers: close contact with Nickelback music and strobe lights, a hammer might be needed to eject particularly stubborn teeth and blood may shoot out of one’s nose.

Miller said his goal is to expand into orthodontics soon. He gave us a sneak peak into the tools he just bought from the dark web, which were so indescribable that we just didn’t bother.