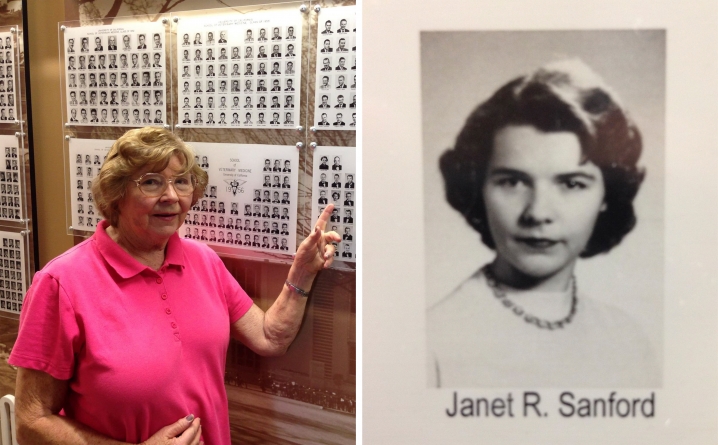 The California Aggie spoke to Janet Sanford about her experience for women’s history month. Our HERstory series will continue throughout the month of March.

In a class of 45 students, Janet Sanford was the second of two women to be admitted to the School of Veterinary Medicine at UC Davis. The school opened its doors to women in the 1950s, and Sanford graduated in 1957. Her admittance paved the way for future women to pursue a career in veterinary medicine. Since the 50s, women have even surpassed the number of men in the industry, according to the American Veterinary Medical Association. At UC Davis, the veterinary school class of 2023 is overwhelmingly made up of women.

“We did something right since it’s 80% women now,” Sanford said.

Growing up in South Wales, Sanford discovered her love of animals at a young age.

“I started wanting to be a veterinarian when I was six,” Sanford said. “Then I met my first pony and got into horses.”

Her work with horses inspired her to pursue study in veterinary medicine when she finally settled in California with her family.

“I had started out wanting to take care of horses,” Sanford said. “One of the good things when I got [to Davis], because I was horse-crazy, was a very nice man in the horse barn. I had a horse given to me to take care of.”

Despite being initially inspired by her love of horses, Sanford’s ultimate career path involved smaller animals. She recalled a time she cared for a dog who had been bitten by a snake.

“My passion for horses has gone on to this day,” Sanford said. “I have just lost my saddle horse, but I’m 87 years old [so] that was probably a good thing.”

In addition to the increase in women’s attendance, UC Davis today is different in other ways, according to Sanford.

“To see the changes, it’s incredible,” Sanford said. “The size of the campus, now it’s amazing and has so many good programs.”

When Sanford attended Davis, the campus was significantly smaller and more rural; she even lived in a farmhouse for part of her time at school.

“There was only North and South Hall when I was there,” Sanford said.

As a young woman, when sharing her future goals with others, Sanford often received negative feedback.

“My local vet who took care of my animals said, ‘Oh that’s ridiculous, they don’t take women,’” Sanford said. “I said, ‘Well it’s time they did.’”

When applying, Sanford faced opposition from within the veterinary school.

“The first dean, he had old-fashioned ideas, but I was pretty determined,” Sanford said. “I had some very nice mentors that convinced the board that I should be there.”

As a minority in her class, Sanford often felt that she was not taken seriously.

“One male came up to me and said ‘You’re taking up a man’s place, you’re never going to practice,’” Sanford said. “But I held my own and didn’t back down.”

The other students at Davis, however, were more accepting.

“I have enjoyed every minute of school and I never felt resented,” Sanford said. “I tried to pull my weight and do the best I could.”