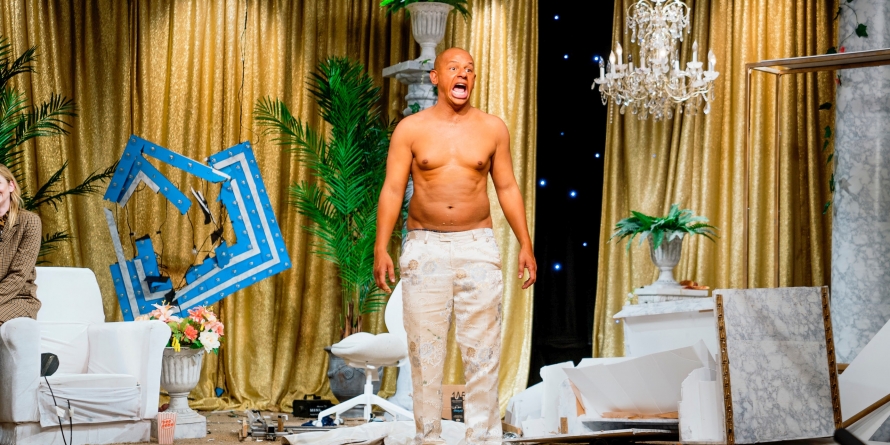 Photo Credits: Adult Swim. From season 5 of the Eric Andre show which premiered on October 25, 2020.

And he’s as vulgar as ever

The fifth season of the surrealist internet-core prank interview fever dream “The Eric Andre Show” premiered midnight on Oct. 25. The show, which is either post-ironic, anti-ironic or anti-comedy—depending on how you look at it—is once again setting out to convince children, whose parents forgot to change the channel before Adult Swim started, that nihilism can be captured in 11-minute episodes and that it’s cool to scream at strangers in NYC.

The core of “The Eric Andre Show” is still coaxing B- and C-list celebrities onto a talk interview set where Andre does his best to traumatize them by any means necessary, from accusing interviewees of committing crimes, to releasing rats under their feet, to the longtime favorite of abrupt violence against members of the production crew. These ploys range from ridiculous to uncomfortable. Andre attempts to kiss guests and offers them unidentifiable gray food—really anything to inflict maximum psychological damage upon these strangers. It’s all for your enjoyment.

Each of these interviews is abridged with constant whiplash-inducing cuts and visual effects intermixed with street pranks—intended to create a disjointed feeling both in the show and viewer. Along with cruelty towards unmemorable celebrities, the lure of the show is this impenetrable film of esoteric comedy. It’s like listening in on a conversation consisting entirely of in-jokes you don’t know. You’re not actually supposed to have any clue what the hell “ranch it up” means, or why Andre shaved his head this season. It’s all supposed to confuse you and be highly unpleasant—exactly like Andre’s behavior towards his guests.

There’s probably some moral conclusion to be drawn about how this, of all things, is what’s respected and trendy in TV comedy now (at least in young hipsterish circles), but any type of earnest thought about “The Eric Andre Show” looks vaguely foolish and sad when it makes such a painstaking effort to be as un-earnest as possible. And besides: It’s incredibly entertaining, so who cares?

Season five is a long delayed return, with season four ending over four years ago, largely due to Andre working on his hidden camera prank movie “Bad Trip,” which was—for an embarrassing moment—accidentally released early by Amazon prior to its presumed debut on Netflix, which has purchased the streaming rights. The film was supposed to release in theaters in April, but that didn’t work out for obvious reasons. The series’ co-star Hannibal Buress has also departed after the season five premiere, replaced up to this point by a rotating series of actors off of Craigslist. The gap in time and cast change haven’t dulled Andre’s comic sensibilities. If anything, they’ve made him even more unhinged.