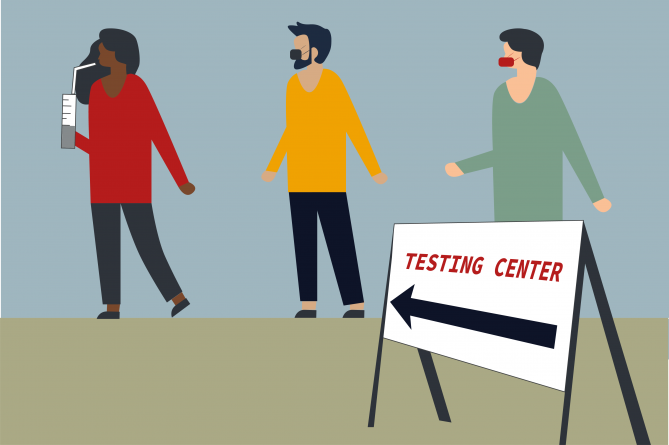 Healthy Davis Together, a partnership between UC Davis and the city of Davis, has brought free saliva-based COVID-19 testing to the broader Davis community. This test involves spitting, unlike the more invasive nasal swab test. The program also distributes free surgical masks.

Currently, testing is available at the Davis Senior Center. On Dec. 6, a second testing center will open at the Mondavi Center for the Performing Arts.

City of Davis Councilmember Dan Carson stressed the importance of collaboration between the City of Davis and UC Davis via email, and mentioned the newly introduced COVID-19 exposure app, called California COVID Notify.

“One of the great things about the Healthy Davis Together program and efforts like the new Covid notification app are that they allow the City of Davis and the UC Davis campus to help each other to combat this dread[ful] disease and potentially save lives,” Carson said via email.

Yolo County Supervisor Don Saylor explained via email that people who live in Davis, work in Davis or travel to Davis should take advantage of this testing opportunity.

“Priority is being given to essential workers and people with significant public contact, including people who think they may have been exposed,” Saylor said via email. “But this saliva test is specifically for asymptomatic individuals; people experiencing COVID-19 symptoms are prohibited from using this test and should contact their healthcare providers for testing.”

Chief Operating Officer of Healthy Davis Together Kenneth Burtis mentioned that frontline workers specifically are encouraged to take advantage of the free testing.

“Until we expand with the Mondavi Center, when our goal will be to test everyone in Davis, right now we really want to encourage a certain group of people to come in for testing,” Burtis said. “Those are people whose daily job or occupation requires them to be in contact with other people—frontline workers.”

Saylor noted that Yolo County is considering ways to bring the saliva testing to other high-risk populations.

“For example, we are considering ways to utilize saliva testing for staff and residents at skilled nursing facilities, convalescent hospitals and other congregate living facilities,” Saylor said via email. “For now, there are 500 tests available per day through the Healthy Davis Together project, which is focused on preventing the spread of COVID-19 specifically in the Davis community.”

City of Woodland Mayor Pro Tempore Tom Stallard expressed hope that the program could eventually be introduced to other nearby cities.

“The university has done a phenomenal job of developing testing protocols for their own campus community and now the wider Davis community,” Stallard said. “Dr. Ken Burtis, a Woodland resident, has been overseeing it. It could be a model for communities everywhere.  I’d love to have that testing protocol in our community.”

Woodland has been harder-hit by COVID-19 than Davis, with 2,067 cases compared to 687 cases in Davis, as of Dec. 3. This is largely due to demographic differences, according to Stallard.

Burtis stated that the source of the Healthy Davis Together funding made it unlikely to be expanded to other cities.

“Healthy Davis Together was actually funded by philanthropic donations from a number of parties with the specific goal of funding Davis and the city of Davis,” Burtis said.  “We are also supporting people who live in other cities but work in Davis.”

The collected samples are processed in the Genome Center at UC Davis, a process which Burtis described in detail. Once samples arrive at the Genome Center, a protein-cleaving enzyme is used to digest the polymers that create viscosity in saliva. The samples are placed in a machine called the IntelliQube, which conducts a type of polymerase chain reaction called quantitative PCR.

“One of the ways we’re able to do so many samples is because robots do a lot of the work,” Burtis said. “The IntelliQube allows us to do many reactions at a time using a tape array. A fluorescent signal develops if it’s a positive—if the primers have amplified some viral RNA. If there’s no virus in the sample, the viral primers don’t cause any amplification.”

“The continued partnership between UC Davis, the City of Davis and Yolo County has been a great demonstration of the ‘Yolo Way’ and has been instrumental in allowing this program to get off the ground and operate as a key part of the COVID-19 mitigation measures in our region,” Saylor said via email.
Written by: Rachel Shey — city@theaggie.org