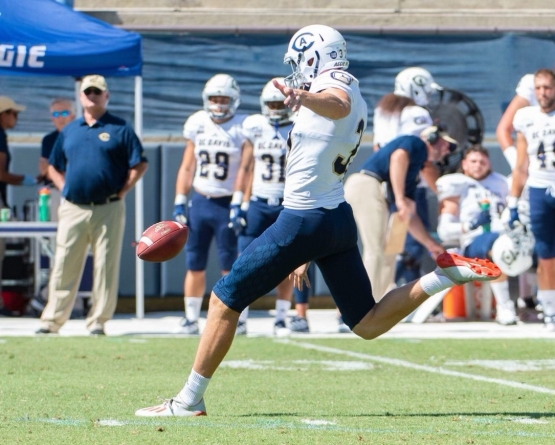 Despite continuous postponements on athletics, UC Davis football player Daniel Whelan details the routine he’s created for himself during the pandemic

Daniel Whelan, a fourth-year sustainable environmental design major, begins his mornings early with a 6:45-7:00 a.m. wake-up call. He gets ready and heads out for his 8:15 a.m workout with the football strength coaches. Due to COVID-19, Whelan stated that the team is unable to practice together. Instead, players must sign up for one of three different scheduled times where they may meet with a small group. Previously, he stated the players’ season was on pause, as restrictions made it difficult to have a uniform practice.

“It was tough for a while, and we couldn’t do anything, but now we’re allowed to at least work out and run,” Whelan said.

In regards to COVID-19 concerns, he stated that an outdoor tent was built outside of the weight room where players must wear masks around strength coaches and practice social distancing guidelines. In addition to new protocols, Whelan mentioned that players need to get tested every Monday.

“I don’t mind getting tested every week as long we’re able to do what we’re doing,” Whelan said.

After their practice ends at 10 a.m., Whelan returns home to make his first meal. His usual breakfast ranges from scrambled eggs and waffles to a protein smoothie. During this daily activity, he likes to wind down after practice with meditation, Youtube or reading. Following his meal, Whelan takes his dog, Jordy, along with his roommate and his roommate’s dog to the park. Afterwards, Whelan returns to begin his first class of the day.

Currently, Whelan is enrolled in two asynchronous lectures that are two hours long each. He likes to complete one class in the afternoon and follows it with a chat with his family, specifically his father who lives in the U.K. Afterwards, he makes his lunch and follows a weekly meal schedule that he plans on Sundays.

“I cook every meal, every day,” Whelan said. “I don’t meal prep. I already know what I’m making, and I have it ready to go.”

Following his lunch, he likes to complete his next two-hour asynchronous class and any work associated with it. When his class is complete, Whelan begins preparing his dinner. His favorite meal to make at the moment is shrimp pasta with alfredo sauce and a side of garlic bread. As he eats, he likes to relax by watching a TV show and prefers to make tea or hot chocolate once the show is over.

His night time routine consists of finishing any homework, meditating and prepping for bed. Since practice is so early, he is typically in bed between 9:30-10:30 p.m.

Globally, COVID-19 has pivoted the lifestyle for student athletes as the normal training and competitive schedule have shifted. Yet for Whelan, this change is not entirely negative.

“Honestly, I think it’s leveled the playing fields for student athletes,” Whelan said. “Now we are all in the same boat. We’re all staying at home. We’re actually at an advantage where we’re allowed to workout and exercise and then come back and do our school.”
Written by: Farrah Ballou — features@theaggie.org