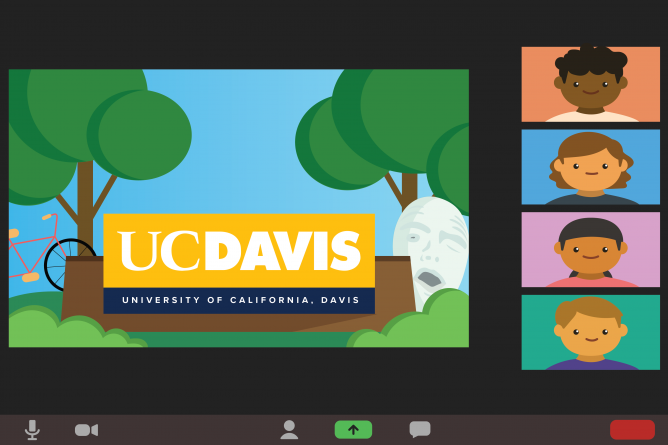 A large group of students who enrolled for the first time last Fall Quarter or the current Winter Quarter have never experienced many of the hallmark characteristics of the UC Davis campus and have had to build connections as Aggies completely online.

Fiona Davis, a third-year English major and transfer student, decided to join UC Davis just as the pandemic was taking hold and has never taken in-person courses at the university. Davis was looking forward to seeing some specific aspects of the UC campus.

“I mean, I was really looking forward to seeing the cows,” Davis said. “I know that some people are not fond of the smell, but I love cows. I love baby cows.”

Davis said that not having the full campus accessible has impacted her UC Davis experience, but she understands the circumstances do not permit in-person instruction.

A previous lawsuit, Ritter v. Regents of the University of California, attempted to request a waiver of fees associated with on-campus amenities, but it was dismissed in federal court.

Marissa Weiss, a transfer specialist for UC Davis, moved from the East Coast to the Davis area but started her new job entirely remotely in July.

“Similar to my experience, their main experience has been all on the computer,” Weiss said. “I’ve talked to so many of them who have never been to campus, or their only time was for decision days or whatever open house they attended.”

Davis said it has been difficult to connect to other students who have already had the in-person campus experience at Davis.

“They talk about the eggheads and the cows and the food trucks that are supposed to be great; all of these things I hear people talk about and they’re like, ‘Wow this is something I really miss,’” Davis said. “I don’t have that connection to the campus.”

UC Davis, which was recently re-certified as a “Platinum level Bicycle Friendly Community” for fostering a healthy bike culture, has long been known for its attachment to bicycles and Weiss has successfully joined this established community.

“I came here with one bicycle for myself and now I have three, so I feel like I’ve made that transition,” Weiss said.

She said she is excited to meet people who, up until now, she has only seen on Zoom.

“I think it will blow my mind just to see the activity,” Weiss said. “I’ve only met a handful of people in person, my supervisor and a few people from my office.”

Kristin Dees, the director of the UC Davis Center for Student Involvement, sees the potential for the return to campus being a hybrid of online and on campus.

“Students, I believe, really do want to be in person and want to connect,” Dees said. “However, when that happens, when we return, their expectation of offices and services and resources will change because of the convenience factor and what virtual engagement has shown them.”

One of the recurring themes she has seen from students is a lack of motivation, and she recommends students get involved with student organizations.

“My advice is connecting with clubs and organizations,” Dees said. “Aggie Life is a great way to do that.”

Students are expected to return to in-person instruction in the fall, according to a press release sent by the UC, which may present problems for students who have just mastered online education.