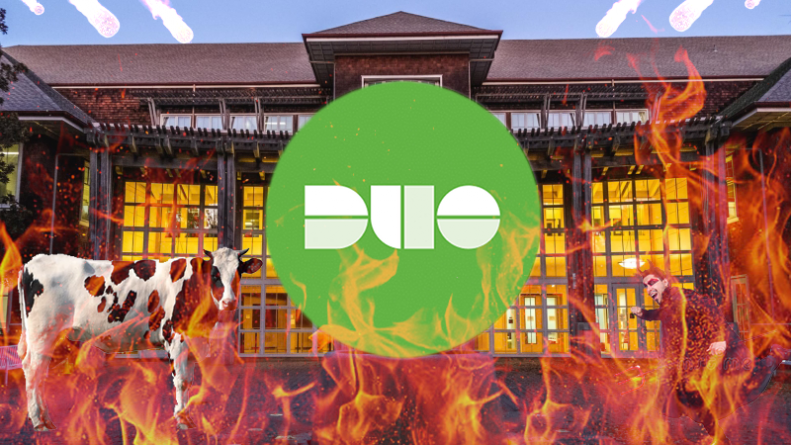 How bad could it be?

In a maddening choice from the UC Davis administration, the move to the authenticator app Duo has been enacted, and students have been forcibly moved, kicking and screaming, to the new education platform.

Regardless of student reception, the university will continue with the move. Even with only about 10% of the student body now currently on Duo, chaos has engulfed the campus. The sun didn’t rise yesterday, cows are walking on two legs and professors are still trying to give closed-book tests online. It may not have been the rapture we all expected, but the end of times is surely upon us.

With flames engulfing the Memorial Union, a Davis administrator gave a speech while a group of demons played frisbee on the quad.

“We’ve gotten a lot of feedback on Duo, and we’d like to know that you’ve all been heard. And subsequently ignored. We see the impact of our actions, but the apocalypse is no excuse for students not turning in homework or not going to online lectures. We ask our student body to come together and pull themselves up by their bootstraps. I may not have had to go to school during times like this, but you don’t see me complaining,” one administrator said.

The California Aggie attempted to get further comments on the subject, but the administrator was abruptly taken away by a flying monkey and thrown into the void in the sky that has now replaced the sun.

In these trying times, I would also like to ask students to come together and tough out the end of the world. Education comes from hard work and perseverance and a few firestorms; wandering cow demons or Satan won’t stop you from getting your degree. So grab a pitchfork and some holy water, and fight for your education.

UC Davis administration would like to remind students that finals will still be held during week 11—and fending off the souls of the damned is not a legitimate excuse.

Disclaimer: (This article is humor and/or satire, and its content is purely fictional. The story and/or names of “sources” are fictionalized.)