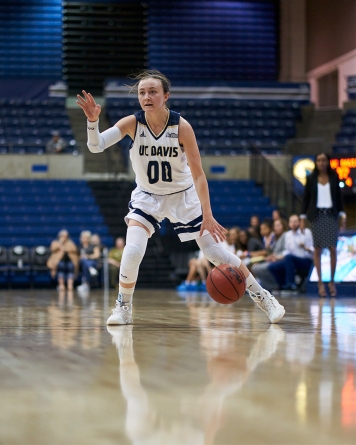 The UC Davis Women’s Basketball team falls to Missouri State in the first round of the NCAA Tournament.

The long and eventful season has come to an end for the UC Davis Women’s Basketball team.

Because of county restrictions, the Aggies’ season was put on hold and they did not play a game from Nov. 25 to Jan. 22. After that nearly two month pause, the team was able to finish off the regular season with no interruptions, and captured their fifth-straight Big West Conference regular season title. Not only that, they managed to turn it into an NCAA Tournament berth for the second straight season—after being unable to compete for that opportunity last year. In the most difficult of circumstances, the team was able make their opportunity count.

“It would’ve been easy, when things got shut down for 59 days for us to be like ‘Okay, things are getting hard let’s pack it up and leave’,” said Big West Conference Player of the Year Cierra Hall postgame. “But that was never even a thought in anybody’s mind. We were in this to win it and get back to the position we are in right now. We had 100 percent sacrifice, 100 percent heart. Everyone was dedicated to winning and celebrating those little moments.”

At the tip, the intensity was evident, as both teams were sprinting for loose balls and defending the best they could. A quick three by redshirt junior and Big West Defensive Player of the Year Sage Stobbart and a jumper by sophomore guard Evanne Turner gave the Aggies a quick 5-0 lead to start. Some great defense was being played by both sides, and for the first three minutes and a half, those were the only five points scored in the game.

Little by little, Missouri St. began to get a feel of the UC Davis defense and slowly began making their shots and went on a run of their own. The Bears went on a 16-3 run, highlighted by their senior Elle Ruffridge, who had half of the 16 points scored in just over four minutes. The Aggies needed to respond, as their high amount of turnovers led to Missouri St. points, and back to back buckets gave them just that, narrowing it to just an 14-11 Bears game. But, a turnover and a bad foul gave the Lady Bears some more opportunities to score, as they finished the first quarter leading 19-11.

After trading baskets to start the second, Missouri St. began to display their offense that led them to the No. 5 seed. The threes began to fall for the Bears and nearly at the midway point of the quarter, they had grown their lead to 15 with a score of 29-14.

UC Davis was in danger of going into the half well out of this game, so whatever they needed to do to get a hold of this game, they needed to show it with under four minutes remaining in the second quarter. A jumper by redshirt junior Kayla Konrad was then followed by a huge three pointer and the foul for Big West Conference Player of the Year Cierra Hall, her first field goal of the game. In the matter of a minute, the Aggies had managed to cut into the deficit and get it down to single digits. Hall did not stop there, as she drained yet another three and assisted on a Stobbart layup. In the blink of an eye, it was a four point game. The Bears finally broke off the scoreless drought and managed to score four points in the final minute to keep them up 33-25 at halftime.

Despite being down eight points, UC Davis began to regain confidence throughout that stretch. That confidence carried over to the third quarter, as they began on a 9-0 run thanks to three straight threes made. For the first time since the early first quarter, the Aggies regained the lead, 34-33. Dating back to the second quarter, the Aggies were on a 20-4 run to completely flip the game around.

The lead did not last long however, as the Lady Bears responded with a big layup to break their long third quarter scoring drought. From then on, Missouri St. began to get good looks at the basket and their jump shots began to hit the bottom of the net. Whereas for UC Davis, their last three pointer that gave them the lead was their last good shot of the quarter. Being unable to make any shots and turning the ball over due to the defensive pressure, the Bears took full advantage, closing the third quarter on a 16-0 run to enter the final frame up 49-34.

All throughout the season and even in this game, the Aggies had shown that they were not going to be put away without a fight. With one last quarter to make something happen, they needed to start seeing some shots go in. Their 8:34 drought finally came to an end after Konrad drained a three to stop the bleeding momentarily.

Even then, they still couldn’t buy a bucket. The Bears began to take over the game, getting an easy shot or second-chance opportunities that continued to chew away at the clock.

They went on another run, this time 7-0, to make it a 20 point lead, the largest of the game. And still, the Aggies would not back down, bringing the full-court trap on the Bears offense that led to turnovers and a quick run of their own, cutting it back down to a 12 point game. With limited time left every possession counted, but the Bears were once again able to get their own offensive boards that just ran down the time. In the end, UC Davis was unable to get back into it, falling in the first round of the tournament, 70-51.

“Obviously we didn’t play our best, and it’s always hard when it’s the game that ends your season where you didn’t play your best,” said five-time Big West Conference Coach of the Year Jennifer Gross after the game. “But, we asked our team to empty the tank before the game and I feel like we did that. We played really hard, we found ourselves in holes and just kept fighting and coming back. I really applaud our kids for that.”

A resilient effort by the Aggies came up short, as they were just not able to overcome the bad shooting night. They shot just 31 percent (18-58) from the field and added 16 turnovers as well. On the other side, Missouri St. shot 37.3 percent from the field, and capitalized on their size advantage, dropping in 32 points in the painted area.

“We came to play and the ball just didn’t fall for us sometimes,” said Hall. “But, i’m so proud of our team and the heart we played with. We really left everything on the court and we gave it everything we had so i’m really proud of my girls and what we accomplished.”

Turner led the Aggies in scoring with 16 and Hall was just behind her at 14 to go along with her eight rebounds and four assists. Stobbart recorded five blocks and Mackenzie Trpcic added eight rebounds of her own. Overall, the Aggies size difference became a biggest factor in the end result, as the Bears were able to gather 20 offensive rebounds that were crucial throughout the game.

“We knew [rebounding] was going to be a key to the game,” Coach Gross said. “Before the game we said we had to limit their easy post catches and we have to rebound. It wasn’t for a lack of effort. I really applaud our kids. They pushed, they shoved. The ball just didn’t go our way.”

With Hall, Trpcic and forward Emma Gibb all seniors, the Aggies will have a lot of questions to answer from important positions. Still, their ability to recruit impactful players and make the most out of their talent has led them to the dynasty they have created in the last five years.

“I’m telling you, there is some talent in our program,” said Coach Gross in a look towards the future. “We’ve got great size, young players that can shoot the ball, can get to the rim, can defend and we saw bits and pieces of it throughout the year. I love that this team is hungry and ready to get better. I think we’re going to be an extremely strong team in the future because we have kids that buy in and want to improve and we have a coaching staff that wants to help them become the best version of themselves.”

It wasn’t an easy season for the team whatsoever—mentally and physically. The uncertainty of whether they would even have a chance to play or not was always there. But even throughout, they showed their ability to stick together and show why they have been Big West Conference regular season champions for five straight years. Although their season ended, the resiliency and fight throughout the year—on and off the court—will make this one of the most memorable UC Davis Women’s Basketball seasons in a long time.
Written by: Omar Navarro — sports@theaggie.org