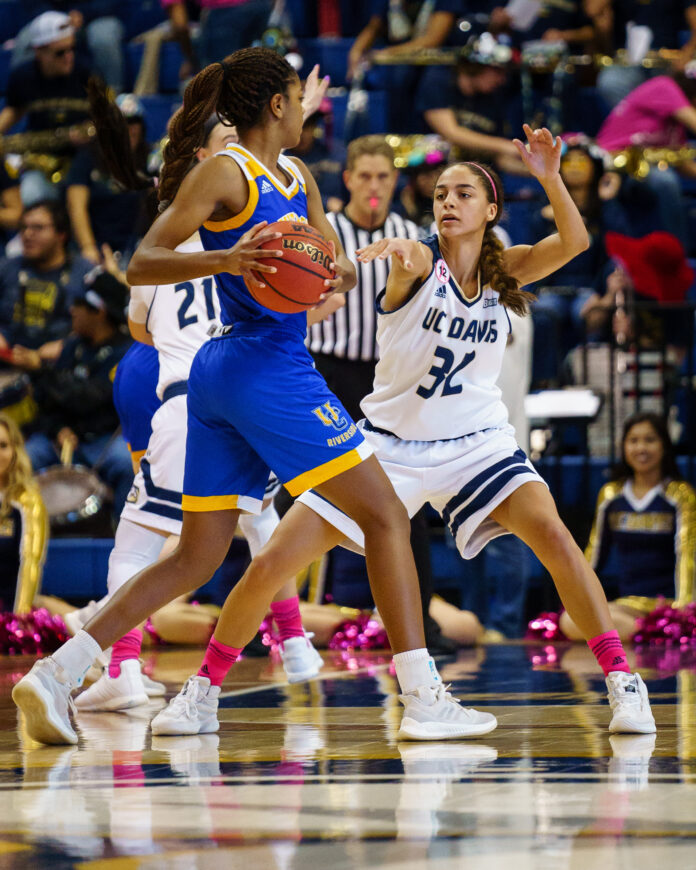 From not knowing what was next to eventually having fans in attendance, the culmination of the school year fosters in a new era with hope

The month of March 2020 will forever be remembered as the moment when it seemed like the country—and most of the world—got turned upside down. The level of uncertainty that clouded the situation of the pandemic will be a moment that will be lodged into the minds of everyone. Like with everything else, the sports world was left at a standstill when COVID-19 hit initially in the states. With the cancellation of the National Basketball Association (NBA) season, National Collegiate Athletic Association (NCAA) Tournament among many other things, executives and fans alike wondered how long it would take to recover.

UC Davis Athletics was put in an interesting position when the pandemic hit. After a successful fall season and the completion of both men’s and women’s basketball regular seasons, all that remained was each team’s respective tournaments and all other spring sports that had just begun or were preparing to begin. But, when mid-March came along, the uncertainty came as well.

“When everything went down in March, our basketball teams were just getting ready to compete in the Big West basketball tournament,” said UC Davis Director of Athletics Rocko DeLuca. “Within the span of about 48 hours, we went from preparing for a basketball tournament to shutting things down and we didn’t know until how long. It’s been a pretty crazy 14 months.”

The summer was long and although the NBA and other leagues began to slowly come back, fans got to experience what it was like to watch their favorite teams with no fans in the stands. As the collegiate athletic season approached, universities across the country began to prepare and tried to find ways to make it work. For UC Davis after the Big West Conference canceled fall sports, they were left in a situation where they had to figure out what they were going to do next—without assurance that they would be competing.

“The overwhelming majority of our student-athletes wanted to compete, practice and be around their teammates.” DeLuca said. “A lot of the hard work was from our sports medicine facilities, strength and conditioning and equipment offices just to try and make sure we were providing a safe environment for practices.”

The tide began to turn a little in fall despite the postponements and cancellations. Like most of the collegiate world, UC Davis was able to get clearance to prepare for their basketball season in late November. With teams able to finally be together and practice as a team, the school prepared with some hope. Yet, like we saw around the country, the rise of COVID-19 cases around the holidays made its way to Davis and Yolo County as well—bringing again more restrictions. After all the work done to get to that point, this period around fall brought some discouragement among a lot of people.

“Those were some pretty dark days because we felt really positive about how we were positioned with all our protocols and everything,” said DeLuca, regarding the pause in the late months of 2020. “In between that period of time, we had to take a week-long pause department wide just as people came back to campus. Some of the numbers were skewing more positively than what we anticipated.”

Still, after being able to get past those moments and since mid-January, things began to pick up once again. Basketball was able to resume, teams began to practice in groups and as time went on, teams began their seasons within county guidelines. Soon after, the school received the green light to begin hosting fans at limited capacity—something that really gave athletics the extra boost they needed.

“April was the first month we were able to have fans,” DeLuca said. “Just being able to see the family members, friends of the student-athletes be able to show up and see them compete again in person was awesome.”

Being able to experience a lot of the sport’s senior days, UC Davis Women’s Lacrosse winning the MPSF Championship and many other moments with fans in the stands gave the university and its student-athletes a time to reflect about the reality of what they had just experienced in previous months. Between the months of April and May when fans were allowed in, DeLuca estimates that there were around 9,000 total fans that were able to safely experience UC Davis sporting events—a number that was difficult to fathom back in late 2020.

As the UC Davis Athletic season has wrapped up, all eyes are on next school year. The NBA has begun their playoffs with teams hosting thousands of fans in the stands depending on their location and they expect to be back at full capacity when the 2021-22 season tips off. The NFL is on a similar boat, as they expect that the majority of the teams will have their stadiums available at full capacity when the new season rolls around. With concerts, UFC and many other events now being held at full capacity, there is a sense of normalcy creeping back into the social life of the country. But, although UC Davis is expected to reopen at a full capacity as well come this fall, where athletics lands on attendance remains to be seen.

“Attendance wise, I’m going to be working with campus on what our capacity will be this fall,” DeLuca said. “I would love for it to be 100%. The [Sacramento] Rivercats announced that they would be at 100% capacity, but I’m going to take my lead from campus and the county health folks.”

Regardless of where UC Davis will stand come the new school year, this past year was memorable for something other than the play on the field. The amount that has changed in the last 14 months and the level of planning that was required to make these sports even happen this past year was massive. All sports leagues and teams around the country also fall under this, as we are now approaching a time where we are getting closer to what life used to be. Still, even after this is all in the rearview mirror, it is important for everyone alike to take deeper appreciation for the things we often otherwise took for granted—and only that way will we be able to look back at this year in its true nature.