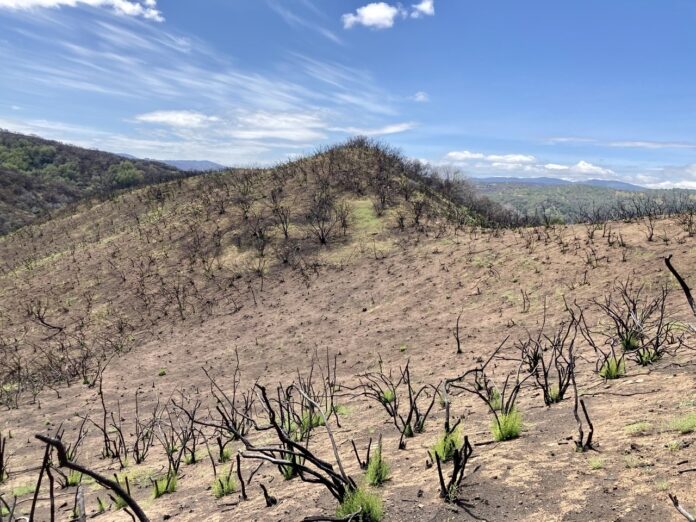 Chaparral shrublands, found all throughout the state, are facing increasingly frequent wildfires that may threaten the native lichen communities

A collaborative study that looked at the impact of wildfires on chaparral ecosystems and long-term lichen recolonization in California was published in the journal Diversity and Distributions on May 10. The paper was co-authored by Alexandra Weill, a fire ecologist and past UC Davis graduate student researcher, Jesse Miller, an ecology lecturer at Stanford University, and John Villella, a lichenologist.

According to a recent press release from UC Davis, “the study indicates that lichen communities may not receive the window of opportunity they need to return to chaparral shrublands after wildfire.”

Found all across California, chaparral ecosystems are dominated by shrubs rather than trees. Lichens are composite organisms made up of both fungi and algae that are able to grow on the side of these shrubs as well as on rocks and branches, according to Villella. The dense population of California, among other factors, has contributed to increased fire danger in these areas.

Weill elaborated on the study’s argument about the challenge posed by wildfires.

“Historically, the forests in the mountains have had sort of these low-intensity fires,” Weill said. “But the chaparral ecosystems, they’re dense, you’ve got these tall shrubs sort of edge-to-edge, and while there historically has been fire there, it was different, not these larger, high-intensity fires. Fires in the chaparral ecosystem occurred about every 45 years.”

The abstract of the study notes that the majority of chaparral lichen taxa may be lost if fire intervals shorten to 20 years or less, which has already taken place in some parts of California.

Weill went on to explain how the study began.

“I was studying fire and I was pretty far into my dissertation research,” Weill said. “I met Jesse when he was a postdoc at UC Davis, and he was like, you know, I’m teaching this class about lichens, you should take it. I knew almost nothing about lichens. I think the extent was that in my college biodiversity class there was like one day where we gathered lichens. It was like, I really should be focusing on my research, but this class seemed cool, so I decided to take it.”

According to Weill, during the class she worked on a project that was a very small-scale version of the recent study. After the class, Miller asked her if she wanted to apply with him to a grant from the California Lichen Society (CLS) and revamp her project.

“We’re very grateful to the California Lichen Society for the grant they gave us,” Miller said. “I’m not sure that we would’ve been able to do this study without it.”

As for how Villella got involved, he explained that he has known Miller for quite some time.

“I met him when he was an undergrad,” Villella said. “We worked together for several years, and we’ve just maintained a friendship since then. We’ve worked on many projects together, many of which involved lichen.”

Miller shared why he believes collaboration to have been of particular importance in this project.

“I think with fire, it’s this huge challenge we face both as scientists and as a society,” Miller said. “Problems like this are sometimes referred to as ‘wicked problems.’ They have no clear, easy answer. So with wicked problems, I think it’s really important to take sort of a holistic approach, looking at it from all these different viewpoints. So we got input from several experienced experts.”

Villella added his thoughts on how the three co-authors’ unique perspectives made the project work.

“I’m sort of the lichen expert, and then Jesse did sort of the statistical part, and Allie brought in the fire ecology perspective,” Villella said. “She also came up with the idea.”

Miller talked about the approach that the team took in their research.

“We’ve known for a while that lichens aren’t very tolerant of fires, but what we don’t know so much about is how much time it takes for them to grow back after disturbances like fire,” Miller said. “It’s just difficult to do such long-term studies. So we took this approach called a chronosequence approach; instead of waiting a hundred years to see what happens, we just went around and looked at areas of lichens that had burned at different times.”

According to the study, their team compared lichen communities at sites that burned 3, 13, 22, 30 and 65 years previously, among other old-growth chaparral sites that don’t have a recorded fire in the last century.

“We were lucky, there were a lot of sites with very different fire history, which is pretty rare in such a small geographic area so it was a really unique opportunity,” Miller said.

Villella explained why he found this study important, and why there is value in protecting lichen biodiversity.

“I think that people don’t realize that they’re really important to the ecosystem for a number of reasons,” Villella said. “First, they’re moisture sponges. They act as a filter and a gathering mechanism for moisture, which is really important in these dry areas. They’re also a home for many different vertebrates, and those in turn become food for birds.”

As far as the impact of increased fire frequency and intensity on ecosystems, Miller offered one solution.

“It might seem like the answer is to try to just stop fires from burning, but it turns out that trying to suppress fires just ends up with more severe fires when they do burn,” Miller said. “Frequent fire keeps fuel down, and makes fires easier to control when they do burn. So funnily enough, the answer might be more prescribed fires.”

“Prescribed fire is a really useful tool for managing landscapes, especially in California where there’s been a historic suppression of fire, although that’s starting to change,” Villella said. “Our point was to also be careful to protect some landscape from burning to protect the lichen diversity as a source population for the lichen to recolonize.”

However, Weills explained that the logistics of using prescribed fires in chaparral ecosystems is slightly more complex than it may first appear.

“In Southern California in particular, controlled burns are much more complicated than in other places,” Weills said. “In the forests there’s not much debate, but in chaparral there is sort of more debate.”

She went on to explain the reasoning behind this debate.

“The thing is that there’s no lack of fire, fires haven’t really stopped there,” Weill said. “So what do prescribed burns do? Well, maybe if we have a fire when we decide rather than when someone sets one, maybe it’s safer for people, maybe there’s less fuel, maybe we can do it so we’re protecting some of the older, more diverse native chaparral. But to do it frequently enough to reduce the risk, you might be pretty much getting rid of chaparral.”

She elaborated that this doesn’t mean they shouldn’t use prescribed burns, only that doing so will require caution.

“The goal is to strike this balance very carefully,” Weill said. “It’s not just going in and burning it, It’s thinking about, ‘Do we burn some of these areas to protect others?’”

“If people even know what lichens are, that’s still above average. Most people don’t know what they are at all,” Miller said. “This whole project originated because I was teaching this class at Davis; I think that just having basic natural history education is hugely important.”

Weill cited similar thoughts, mentioning how chaparral ecosystems exist all across California, making them especially relevant to California residents who both walk through them frequently and have a disproportionate effect on the potential for wildfire.

“These systems are close to so many of us,” Weill said. “It’s really cool. I think me and Jesse both think lichens are awesome. They’re things you can sort of pass by and not appreciate them; they’re such a cool part of nature, but they’re easy to miss.

In reference to the lichenology class she took, she praised how it’s impacted her.

“I’m not exaggerating when I say it was life-changing,” Weill said. “Once you start learning about lichens, you really start seeing them everywhere.”

Correction: The original version of this article misspelled Jesse Miller’s name. The article has been updated to correct this error.