Unitrans fleet strives to be green 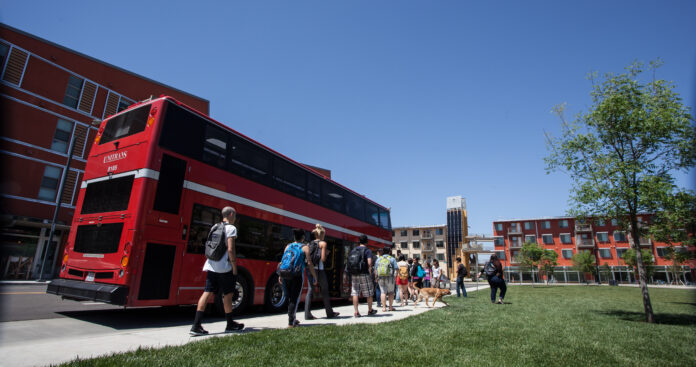 With UC Davis’ eco-friendly biking community, some cringe at the thought of climbing aboard a diesel-guzzling city bus. But with Unitrans now operating 44 of its 49 vehicles on alternative fuels, students can hitch a ride without worrying too much about excessive emissions.

For the past 20 years, Unitrans has been slowly building a sustainable fleet of classic buses, London double-deckers and Tipsy Taxis through a methodical process of replacing outdated diesel engines with ones that burn compressed natural gas (CNG).

“There have been many people pushing [for CNG use] in the transit world,” said Unitrans Maintenance Manager Andrew Wyly.

Natural gas is the cleanest burning fossil fuel. It is composed mainly of methane, and products of natural gas combustion are carbon dioxide and water vapor. Coal and oil energy sources are composed of more complex molecules, making more harmful products such as sulfur dioxide, in addition to ash and other particulate matter. Compressed natural gas produces 70 percent of the CO2 compared to gasoline. In the United States, over 100,000 vehicles run on natural gas, and 62 percent of those vehicles are transit buses.

“[Compressed natural gas] utilizes the same kind of gas that you would get from your stove at home, except we compress it at 3200 psi and deliver it to our vehicles,” Wyly said. “The majority of our fleet runs on natural gas — about 44 out of 49 [vehicles] — including one of the retrofitted antique double deckers.”

Upon realizing that there was a high supply and relatively low environmental impact associated with natural gas, federal and state entities began to set aside incentive dollars to help with Unitrans’ and others’ initial startup costs.

While substituting natural gas for gasoline inherently results in the release of fewer environmentally detrimental emissions, monetary cost is severely reduced as well.

Performance and efficiency are not lost in the changeover, and when considering the environmental and monetary benefits, it’s no wonder that Unitrans saw natural gas as an attractive fuel source.

Despite speculation over fracking, an environmentally-unfriendly method of obtaining natural gas, workers at Unitrans feel that the benefits are too great in the long term to pass up.

Warmack went on to say that while fracking is an unfortunate practice, when comparing years’ worth of diesel emissions with natural gas emissions, CNG is the cleaner way to go.

As Unitrans approaches a full fleet of sustainably-fueled vehicles, the group has tackled the toughest project of all: refurbishing the iconic London-style double decker buses.

“It’s sustainability to the extreme: We’re reusing a product that’s been on the road since 1950, and we’re keeping it on the road using modern technology,” Wyly said.

The older-style buses proved tougher to work on than modern vehicles, and with a different engine and battery location innovations were needed to keep the buses up to standard. Students and engineers decided to move the CNG tanks from the roof of the buses to underneath the chassis, a move that came with its own set of problems, according to Marissa Reis, UC Davis alumna and contracted Unitrans shop worker.

Thanks to creativity and problem solving, the team was able to devise a solution by moving the location of the batteries to ensure proper ventilation.

“These buses, because they are so old, need to be remodeled every 10 years anyway,” Reis said. “When it was time for this guy, we thought, it’s time that we switch the engine over to CNG. The bus itself will run longer with natural gas, and it will burn so much cleaner.”

When considering whether to continue burning diesel every day for 10 years, or take the time to replace the engine with something that would burn cleaner, Reis said that it was a no-brainer to do the right thing for the environment.

In the coming years, Wyly expects the lighting in Unitrans facility will eventually be LEDs (light emitting diodes), cutting operation costs and energy usage. Rather than buying new materials for retrofitting, the Unitrans facility reuses parts of older vehicles. Wyly also discussed the possibility of converting the newer double decker buses to run on natural gas in the future. However, there are structural complications involved that could take time to sort out.

According to the UC Davis Transportation and Parking Services (TAPS), around 46 percent of the campus population uses bicycles as their primary form of transportation, while 24 percent drive alone, 18 percent take the bus, 6 percent carpool, 6 percent walk or skate, and 1 percent use the train.

“Our goal is for more people [to] ride their bikes or walk to campus,” said Scott Weintraub, Unitrans operations manager. “But overall, public transportation is much more environmentally friendly than one individual driving their car to campus every day.”