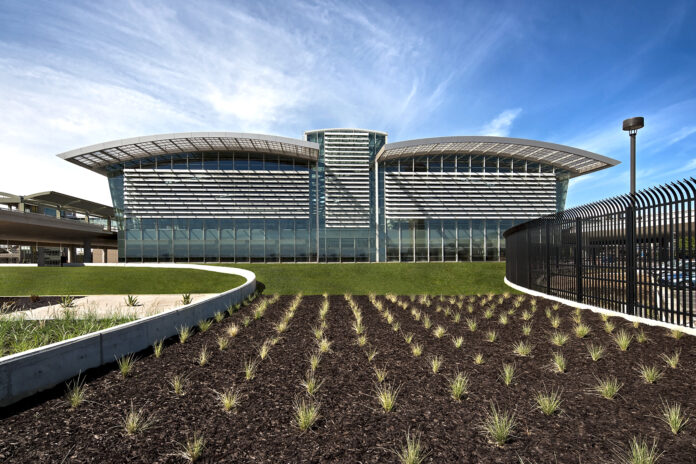 The Sacramento International Airport plans to install two 15-acre solar farms to provide power for its operations that will potentially save the airport $15 million on energy within the next 20 years. Additionally it will reduce its energy use by 15 percent by 2020. This April the Sacramento International Airport will request permission from the county board of supervisors to sign a contract with a solar company that will prospectively provide power to its facilities.

As of now, the airport spends $3.4 million every year on electricity. On top of these costs, the Sacramento International Airport produced billions of dollars in debt when it constructed Terminal B and a jet concourse building. As a result, the Sacramento International Airport became one of the most costly airports for airlines to do business with in the United States.

Laurie Slothower, communication and media officer for the Sacramento Department of Airports, explained why the airport decided to turn to solar panels.

“Sacramento International Airport is committed to wise use of environmental resources. Terminal B was designed with an eye towards green technology and in fact earned Leadership in Energy and Environmental Design (LEED) silver certification in 2012. The overall goal of the solar project is operate Sacramento International Airport in an environmentally sustainable manner that reduces operating costs. We anticipate energy savings of $15 million over [the next] 20 years,” Slothower said .

Slothower stated that the airport had been discussing solar energy for a while.

“We have been discussing solar energy at Sacramento International Airport for many years. The plan and subsequent Request for Proposal (RFP) was designed by a team of airport planners and the noise and sustainability program coordinator,” said Slothower.

Solar energy has been an increasingly used source of power because of its economical and environmental benefits according to Adam C. Schultz, program manager of the University of California, Davis Energy Institute.

“What’s happened is that the cost of solar has come down dramatically in the last 10 years…I would say it costs less than 50 percent of what it costed 10 years ago. And a lot of that is driven by [technological] advances but also, particularly in California, the state renewable portfolio standard which requires, by law, 33 percent of energy to be from renewable sources of energy by 2020,” Schultz said.

Schultz added a brief explanation of the negative environmental impacts that solar energy would offset. Aside from renewable sources of energy, Schultz said we mostly rely on some large hydroelectric plants, the big dam in the Sierras and natural gas facilities.

“Natural gas facilities have several air pollution impacts…[They] cause local air quality impact and result in ozone issues…You get this air quality impact whenever you’re relying on any kind of fossil fuel, whether it’s natural gas or in other states, coal. So when you’re putting in solar, you’re offsetting that,”  Schultz said.

According to Anthony Wexler, a professor of mechanical and aerospace engineering at UC Davis, solar panels produce electricity when photons from sunlight hit the panel and separate an electron from the atom it is sitting in. This electron then floats into the wire and makes electricity.

When asked to illustrate about how much power the seven megawatt solar panels would provide the airport with, Wexler explained in terms of how many houses one megawatt would power.

Since publishing the RFP to the airport’s website in September 2014, Slothower says 14 vendors have submit proposals.

“Operators are selected on the basis of how well they meet the criteria in the RFP. Fourteen vendors responded. We have selected a business whose name will be included in the staff report going to the Board of Supervisors on April 14,”  Slothower said.

Slothower stated that the potential solar company would be responsible for covering the costs of the solar project.

“The successful proposer will design, build, operate, maintain, own, transfer, and provide electricity to the airport,”  Slothower said.

When a solar vendor is approved, the Sacramento airport’s project will hopefully be up and running in 2016. Slothower explained that once the Board of Supervisors accepts the airport’s recommendation, further action can be taken.

“If the Board of Supervisors accepts the airport’s recommendation, we will immediately begin the process of environmental and regulatory review required for a project of this magnitude. We hope the solar farm  will be operational by the summer or fall of 2016,” said Slothower.

Schultz and Wexler expressed enthusiasm for projects like that of the Sacramento International Airport because of the general, positive impacts of solar energy.

“I’m very curious about how it’s going to be arranged and how they’re interacting with the utility. I think it’s great. Some of what we’re going to see a lot more of in the future is the distributed solar facilities that are subscribed or the energy purchased by large customers. UC Davis is doing it, Sacramento International Airport is doing it, Google is doing it, Apple is doing it and again a lot of the big companies that are institutions in California are starting to do it because the costs have come down so much because it really has become economical. I think it’s good for all of us,” Schultz said.

“It’s great. We’re burning fossil fuels around the world and we are changing the climate as a result of that and the more renewable energy we use, the better it is and solar energy is a great renewable energy. So the more of this, the better,”  Wexler said.