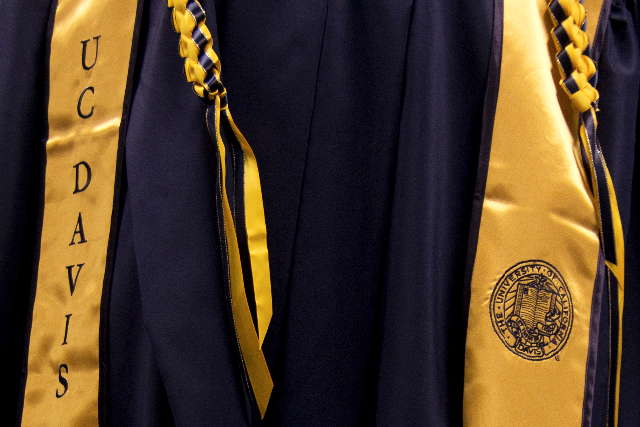 The graduating class of spring 2014 will be the first to wear blue graduation gowns at UC Davis. The color of the gowns used by the majority of UC schools, and the color of robes previously used by UC Davis, is black.

The new robes will be blue with a gold stripe to match the UC Davis school colors. They will also feature a UC Davis emblem on the shoulder of the robes for those graduating with bachelor’s and master’s degrees.

Tracy Roman, associate director of finance for UC Davis Stores, said the idea to switch to custom robes was presented to the UC Davis Stores by Strategic Communications and the Office of the Chancellor and Provost. Their goal was to make UC Davis graduates stand out among the rest of the UC schools. The new robes are manufactured by Herff Jones, which also manufactures gowns for many other UC schools.

“We met with multiple companies to see which had the best services,” Roman said. “Herff provided the best overall program.”

Roman said that the robes are made more sustainably than previous ones. Each robe is made out of 74 percent recycled water bottles and is also constructed out of a recycled fabric, called REPREVE yarn.

Lindsey Richardt, a Herff Jones representative, said that the gowns made out of recycled water bottles are called EarthGrad Gowns. They are custom-made, as opposed to Herff Jones’ keeper gowns, which are typically black and allow students to keep the gowns after graduation.

“The EarthGrad gowns benefit the students and the school because they are uniquely customized for each school,” Richardt said.

Richardt said the advantage to having the gowns be rentals is that they are made out of a better quality. They are also more sustainable so they can last for years after to be rented to more students.

“This means instead of keeping the gowns, they are passed down from one graduating class to the next,” Richardt said. “This prevents gowns from ending up in landfills after being used one time.”

Previous ASUCD President Carly Sandstrom, currently an international relations and economics fourth-year, said that she thinks the color of the gowns and the sustainability represent UC Davis better than previous gowns. The robes were presented to her when she was ASUCD president.

“I really like the new robes because our old ones just didn’t look like Davis,” Sandstrom said. “It’s huge for the robes to look more Aggie Pride.”

“Chancellor [Linda P.B.] Katehi really liked the presentation of the robes, but was concerned about the price increase,” Roman said. “We kept prices of the grad gowns competitive with other schools.”

UC Merced is the only other UC switching from black to custom blue robes for its spring graduation. But Merced’s gowns will be keeper gowns instead of rentals, like at UC Davis, because UC Merced is a smaller school. The package at UC Merced school costs $45.

Sandstrom said that the price to have the robes more sustainable is small. She said that the robes also fits the mission of UC Davis to be an environmental friendly school.

“It makes us stick out more,” Sandstrom said. “We might take the first step to encourage other schools to switch.”

Roman said that the gowns were presented to many different groups on campus before they were decided upon. The final approval was given by the Dean’s Advisory Council.

In a statement, Chancellor Katehi said that the custom blue gowns will make the ceremony more memorable for those graduating and those watching the graduation.

“By moving to the ‘Aggie Blue’ gowns, I think it makes the ceremony … more distinctly our own,” Katehi said. “The new gowns are also more environmentally friendly, which aligns with our campus’ dedication to seeking sustainable solutions in all we do.”

Josie Cravotto, a fourth-year political science major who will be graduating this spring, said that she was not yet aware of the change in graduation robes.

“The black robes were more traditional, but I like the blue,” Cravotto said. “I don’t really like the logo.”

Cravotto said she was not concerned about the price increase but wonders if it will keep increasing more in later years.

Roman said that the feedback she has received from the robes so far has been positive. She said that three students so far have questioned the change in color via email, and after being given more information have not further replied.

“Everybody who has seen and reviewed the robes in person have said positive things,” Roman said.