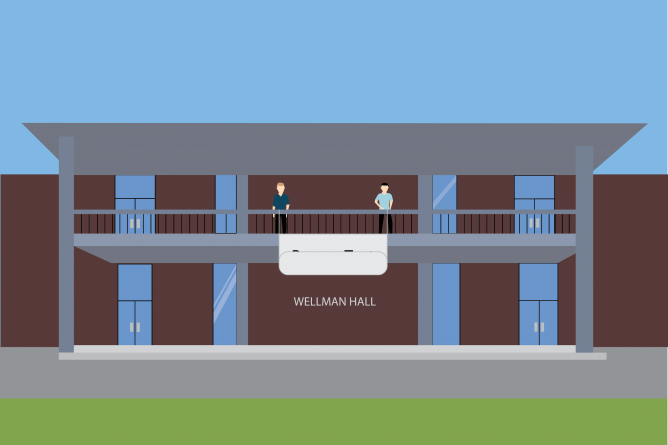 With a potential Iran-US conflict looming, students have different ideas for achieving “no more wars”

A group of roughly 20 people gathered around three students holding a folded banner on the second floor of Wellman Hall on Jan. 22. After counting down from three, the students unfolded the banner — “No More Wars” was written across the middle in blocky red letters — and taped it to the Wellman railing.

Written on the banner were two hashtags: #WeAreDissenters and #NoWarWithIran. Tensions between Iran and the U.S. escalated earlier this month after the Jan. 3 airstrike that killed Qasem Solemani, the top Iranian military general.

The strike was ordered by President Donald Trump to “stop a war.” Iran’s leader Ayatollah Ali Khamenei vowed “harsh retaliation” in response, prompting the U.S. to send thousands of troops to the region.

UC Davis issued a statement offering support to students and scholars from Iran on Jan. 7, urging students to reach out to Services for International Students and Scholars or the vice provost and associate chancellor of Global Affairs if they had additional needs.

Those opposed to the U.S.-Iran conflict and increased military presence in Iran are mobilizing to advocate against war. One of these opposers is Megan Duong, the administrative coordinator for Southeast Asians Furthering Education and a second-year sociology major.

Duong and one of her coworkers at the Student Recruitment and Retention Center (SRRC) learned about the organization Dissenters, an “anti-militarist youth organization worldwide,” through their work.
Over Winter Break, Duong and her coworker went to Chicago for a training and came back planning to start a Dissenters chapter on campus that would, she said, stigmatize war and militarism while stressing an intersectional movement fighting against different forms of oppression.

The Dissenters training, according to its organizing director, Timmy Rose, focuses on developing clear skills for connecting and mobilizing communities for change.

“Dissenters understands resisting systems of war and militarism also means unlearning interpersonal and social patterns of dominance and shame,” Rose said. “We also provide space for young folks to develop new ways of relating to each other that honor our commitment to connection, collaboration and vulnerability.”

Rose’s parents are Vietnamese immigrants who lived through the Vietnam War. He learned about the impacts of militarism and war through his family’s oral histories. To him, anti-war movements are all interconnected.
“The war on black people waged through genocidal policing and incarceration in the so-called U.S. is part of the same system that seeks to maim and contain excess populations in the Middle East through military intervention and occupation,” Rose said.

Like Rose, Duong family’s background, and her own connection to other struggles, grounds her in her work with Dissenters. Her parents were displaced from Southeast Asia because of forms of war and militarism.

“[I’m] thinking about the violence that my parents faced and how they’re connected to systems that continue to violate people,” she said. “Whether that looks like remnants of Japanese incarceration or police killings in black and brown neighborhoods, militarism comes in many different forms, and I’m against all of that.”

That wasn’t the only driving force that motivated Duong to get involved with Dissenters.

“Working for the SRRC made me see the limitations of student centers on campus,” she said. “I felt the need to find a movement where I could organize freely, one that emphasized building power at the base.”
Anti-war sentiment, according to former ASUCD President Michael Gofman, is a misnomer. Gofman reframed the pro-war and anti-war debate as interventionist versus non-interventionist.

Despite this sentiment, support for the U.S. pulling out of Iran — instead of escalating military action — has spread to the City of Davis. On Jan. 9, 48 people met at Central Park to hold an anti-war demonstration.

One organizer urged Congressman John Garamendi to take action on behalf of the troops, according to Patch,

“We would hope that the congressman’s great support of our troops, with two Air Force Bases in this district, means he will definitively oppose sending them into an unprovoked and illegal war,” the organizer wrote.

Gofman sees military intervention differently.
“My family are all refugees from the former Soviet Union,” he said. “It influenced my worldview by showing me that America is a global force for good and can help people.”

To Gofman, withdrawing from Iran could have greater consequences than U.S. troops’ deployment.
“I believe the actual way to achieve that goal of no wars is not through withdrawing, but through a strong foreign policy,” he said. “Being well-armed through deterrence, not through apology or withdrawal and isolationism.”

Gofman acknowledges that the U.S. has made foreign policy mistakes. To some UC Davis students, those mistakes include the Vietnam War and the war in Iraq.

In May of 1969, according to UC Davis News, thousands of UC Davis students marched twice: once to the campus administration building, where they submitted a list of grievances, and once to the State Capitol in the “March for Peace.”

UC Davis alum Ben Wang, the co-director of the Asian Prisoner Support Committee, remembers the tension that gripped the campus after 9/11, which happened between his first and second year at UC Davis.

“When 9/11 happened, immediately I dreaded it — you could kind of just forecast what could happen,” he said. “There’s gonna be a violent military response, there’s gonna be a lot of racist violence against people of color.”
Being a student on the UC Davis campus in the wake of 9/11 and the start of the war in Iraq challenged Wang to think of ways to connect “old” history to current events.
“I’m Chinese and Japanese American, so some of my relatives were incarcerated in World War II in the Japanese-American internment camps,” he said. “It’s always part of my family history, and coming of age made me want to show how a lot of these legacies, around racism and imperialism, are still very much alive.”

Duong’s own coming-of-age on the UC Davis campus has made her hopeful that her organizing will go beyond awareness and enact systemic change.

“Young people have the power to turn the tide against endless wars and endless forms of violence in our communities,” she said. “The government better watch out.”