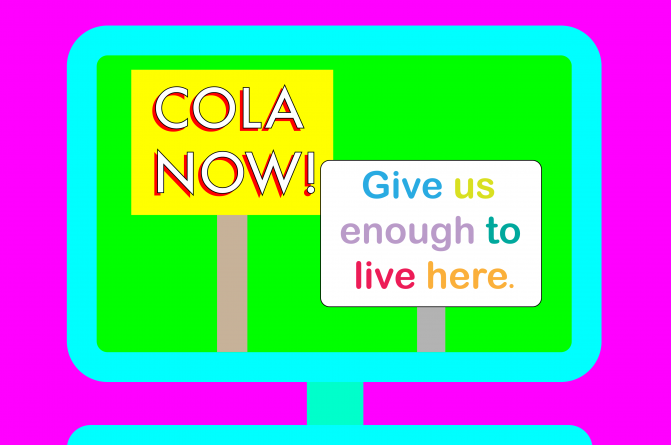 Graduate students at UC Davis who withheld grades as part of the Cost of Living Adjustment (COLA) movement submitted Winter Quarter grades on April 12, ending a grade strike that began on Feb. 27.

UC San Diego graduate students in support of COLA, who also withheld Winter Quarter grades starting March 18, also submitted grades on April 12. On April 27, the UC Santa Cruz COLA movement released a Twitter statement saying they were moving to a “new phase of organizing” and that those withholding Fall and Winter Quarter grades would submit them.

In the statement, the UC Santa Cruz COLA organizers said that they were also submitting grades because the administration said they would be switching all missing grades to a P on May 1.

“The administration has shifted the burden of missing grades from themselves and onto the undergraduates it purports to care for and educate,” the statement reads. “We cannot allow this.”

Organizers for UCD4COLA and COLA4UCSD both said the grading strike was causing more stress under the pandemic, and that to continue the grade strike would contradict the movement’s goals.

COLA4UCSD said in a letter sent out to UC San Diego faculty and staff that those participating in the movement will pursue actions that won’t create additional labor for staff and faculty.

Similarly, UCD4COLA organizers said in a statement that the strike’s end came as a result of COLA organizers reaching a consensus that the grade strike wasn’t the best way to achieve their goal of a COLA.

“Strikers collectively decided to submit Winter Quarter grades in order to refocus our energies on a diversity of tactics and strategies,” the statement read. “Submitting Winter grades does not signal retreat for UCD4COLA and the COLA4All movement.”

Ashley Teodorson-Taggart, a PhD student in cultural studies at UC Davis and a COLA supporter, decided before this consensus that she would submit her students’ Winter Quarter grades.

She explained that when the pandemic began to shut down campus operations during Week 10 of Winter Quarter, she started to get emails from students who needed to prioritize their families and themselves. These students were worried because they still had to carry on with normal academic responsibilities.

“As that [finals] week unfolded, I thought very carefully about what it would mean for my students [to not submit grades],” she said. “I think as teachers, our first responsibility is to think about ethical obligations to our students and to support safe and healthy learning.”

“Threats of disciplinary action” from Interim Dean of Letters & Sciences Ari Kelman also spurred strikers with UCD4COLA to submit grades, according to its statement.

In an email provided to The Aggie by a graduate student who asked to remain anonymous for privacy reasons, Kelman wrote that if those withholding grades did not submit them by April 13 at 5 p.m., they could face disciplinary action per Article 3 of the Unit 18 Memorandum of Understanding.

Kelman said in the email that withholding grades may violate three clauses of the article: “undue and unexcused delay in evaluating student work, use of faculty position to cause harm for arbitrary or personal reasons and participating in or deliberately abetting disruption, interference or intimidation in the classroom.”

Though he acknowledged instructors’ efforts to protect students from potential harm caused by grade withholding, Kelman also said in his email that some students may not be prepared to advocate for themselves if they feel uncomfortable with the grade strike.

“We have many students who are very anxious about their lack of grades, including some who are facing financial jeopardy or academic peril,” Kelman wrote. “My hope is that […] given your stated interest in protecting students, you will submit your grades. […] Your conduct, no matter how well-intentioned you think it may be, is creating additional stress for these students and others.”

In a separate email to The Aggie, Kelman said he sympathizes with the cause and believes UC Davis is strengthened by organized labor. Kelman also said, however, that he supported undergraduate students and their right to their grades given the “stressful time of remote instruction,” adding that the grade strike was unsanctioned by the graduate students’ union, United Auto Workers (UAW) 2865.

“While I respect the right of members of the campus community […] to protest, I also hope that protesters understand that there are consequences to violating the Collective Bargaining Agreement, particularly if their conduct causes harm to undergraduate students,” Kelman wrote.

Wildcat strikers at UC Santa Cruz withholding grades were told by UC Santa Cruz on March 30, after negotiations with UAW 2865, that the 82 graduate students fired for striking in February would be able to find a Spring Quarter appointment if they submitted Winter Quarter grades by 5 p.m. the same day. Prior negotiations between UAW 2865 and UC Santa Cruz resulted in the reinstatement of the fired students’ healthcare through summer.

Though the strikers issued a counter-offer calling for compensation for those who were unable to find appointments, UC Santa Cruz did not respond.

According to Scott Hernandez-Jason, UC Santa Cruz’s Director of News and Media Relations, nine academic student employees had not turned in Winter Quarter grades by April 13.

“Two of those cases turned out to be unrelated to the grade strike and we have retracted the [dismissal] notices sent to those students,” Hernandez-Jason said in an email. “We have seven cases underway.”

UC Irvine graduate students in support of the COLA movement are currently engaged in what they call a social welfare strike, creating resource lists and mutual aid networks to connect those in need of support to those who can provide it. They are doing this in lieu of teaching, grading and research.
UCD4COLA has engaged in similar mutual aid efforts, such as conducting a survey that found 37 undergraduate respondents living in “unsafe and unreliable conditions.” They then announced these results on Twitter and encouraged people to donate money to their Venmo to help these undergraduate students.

Meanwhile, though UAW 2865 announced it would hold an Unfair Labor Practice Strike Authorization Vote in early April, the union has been focusing its efforts on bargaining for COVID-19 protections and said it was currently still looking at options for a strike authorization vote. If that vote succeeded by a two-thirds majority, all students represented by UAW 2865 would officially be on strike.

In statements from the UC Office of the President, the UC has repeatedly maintained that it will not bargain with the union over a COLA until the collective bargaining agreement expires in 2022.

Supporters of the COLA movement have been pushing UAW 2865 to move the vote up through phone banking and signing a pledge in support of a sanctioned strike, according to the UCSC COLA website.

While the next phase of UCD4COLA remains in flux, Teodorson-Taggart said, right now, the top priority of the movement should be keeping people as safe and balanced as possible.

“All of these changes are happening quickly,” she said. “How do we assess the ways we contribute and support and resist [labor] extraction and allow that not to happen while also tending to the needs of our students and our families? We need to have a flexible response.”