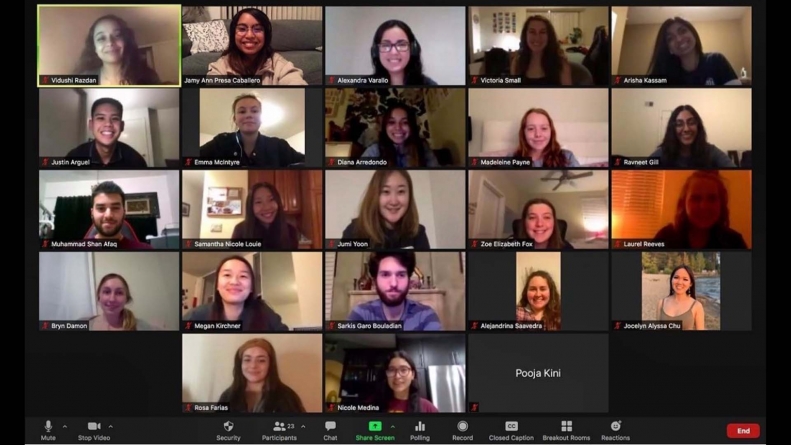 Before the pandemic, the UC Davis chapter of Alzheimer’s Buddies (ABUD), a national student organization that builds connections with patients suffering from later stages of Alzheimer’s disease, took weekly trips to local senior facilities to maintain one-on-one contact with Alzheimer’s residents. Because in-person visits can no longer take place between the club and the senior facilities they were previously partnered with, the primary focus of the club is now to build understanding and compassion around the disease by educating their members on its physical, emotional and societal effects.

The members of ABUD are currently working on holding virtual visits with their buddies. Certain senior facilities have allowed the club to compile and send care packages to residents during the pandemic.

Vidushi Razdan, a fourth-year neurobiology, physiology and behavior (NPB) major and the external co-president of ABUD, looks for new members who demonstrate an interest in establishing emotional connections with residents.

“A lot of people who join our club are pre-med students or pre-health students,” Razdan said. “I know I am one too, so one of the big things we look at is someone who wants to make a lifelong connection with someone, not someone who’s just looking for patient care experiences because they’re not patients. They’re our buddies and we want to connect with them.”

Razdan emphasized that it’s important for new members to be aware of some of the behavior they may witness when visiting their buddies and to react with patience.

“When I first went to my facility, there was one resident who always wanted to leave,” Razdan said. “You kind of have to take a step back and understand what is going on in the situation—what you can and can’t do—and I feel like with experience you get better at those kinds of situations.”

Arisha Kassam, a second-year NPB major and a new member of ABUD, stated that it is important to understand that the way an Alzheimer buddy acts toward you isn’t personal. An integral part of being a member of the club is having compassion.

Sarkis Bouladian, a fourth-year genetics and genomics major and the Alzheimer’s awareness trainer of ABUD, is now in his third year as a member. Bouladian’s role in the club, which he created in part as a response to the pandemic, is to not only teach members how to interact with residents but to educate them on how Alzheimer’s impacts families.

“Sometimes minority populations are disproportionately impacted,” Bouladian said. “I like to talk about how those populations are also less likely to be able to pay for high-quality [assisted living facilities].”

For Kassam, it can be difficult to know that the club is not able to have the same kind of impact on residents during the pandemic, a time of uncertainty for many individuals.

“It’s very very difficult for these patients to not have that human interaction and […] feeling of warmth where there’s someone who cares and it’s not just someone who’s [there] out of responsibility,” Kassam said.

Bouladian recalls questioning if he was making a positive impression on the lives of residents when he was a new member of ABUD.

“I actually sometimes would think to myself, ‘What impact is this going to have? This person isn’t even going to remember, so what’s the point?’” Bouladian said. “But they actually do remember; you’d be surprised. Their face just lights up with a massive smile every time you sit next to them. They’re uplifted by your presence and you’ll be able to tell when that happens.”

Razdan recounted her visits with one of her buddies before the pandemic who first appeared to not be very interested in interacting with her.

“She didn’t want to talk to me at all, so I thought she didn’t want me there,” Razdan said. “One day, I don’t know what compelled me to do it but I just kind of held her hand, and […] she wasn’t talking but you could see some tears in her eyes. I think that’s definitely a moment when I was like, ‘Yeah, I’ve definitely made an impact.’”
Written by: Lyra Farrell — features@theaggie.org