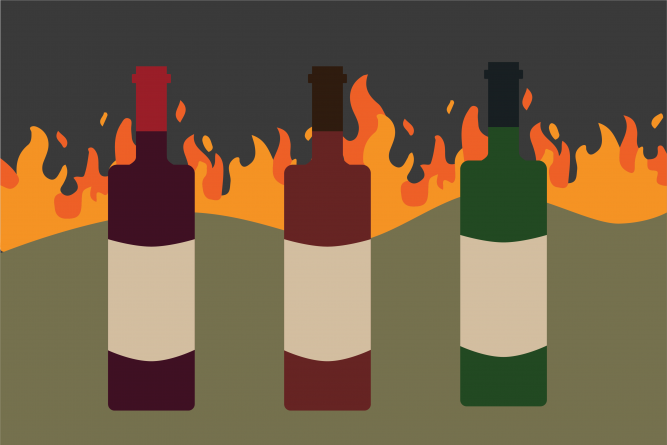 While wildfires are often known for the devastating effects they impart on local communities, few realize the wider impacts they can have on industries throughout California. In terms of the wine industry, grapes’ exposure to smoke in the air has the potential to ruin the wine product by giving it an unwanted smoky flavor, according to UC Davis researchers.

A smoky flavor is often satisfactory for customers when aging the wine in wooden barrels, according to Anita Oberholster, a cooperative extension enology specialist at UC Davis. However, like many other good things, too much can create a negative effect.

The smoke from nearby wildfires will cause an increase of that smoky flavor and tarnish the flavor of the wine, according to Oberholster. This leads wine growers to question what the risk is when their harvest is exposed to smoky conditions.

Volatile phenols, the compounds that are released when wood burns, break down quickly and absorb into ash. This extends their lifetime and allows them to absorb into the grapes. The density of smoke relatively correlates to smoke risk if the smoke is really fresh, according to Oberholster. After the smoke has been in the air for a while, the correlation decreases.

“Just because you see there’s grapes on a vine and smoke in the vineyard, that doesn’t mean anything,” Oberholster said.

It should not be assumed that the grapes will be impacted since the compounds released from the fires cannot be seen with the naked eye. The smoke in the vineyard can just be particulate matter suspended in the air, which is not harmful to the berries, according to Oberholster.

When the grape absorbs all the free volatile phenols in the air, it oscillates these compounds as a defense mechanism, releasing sugars on the fruit. It is believed that the bound, smoke-impacted compounds are released by bacterial enzymes in human saliva, which contribute to the character of smoke taint that affects the taste of the wine.

Raul Cauduro Girardello, a postdoctoral student in the UC Davis Department of Viticulture and Enology, works in Oberholster’s lab. He was present with Oberholster at the Oakville Experimental Station in 2017 when there were wildfires causing smoky conditions in the vineyard.

“This was around the time Anita started thinking about doing smoke taint research,” Girardello said.

Girardello was conducting an experiment at the time and lost part of it due to the grapes being impacted by the smoke. This was the first day that Girardello and Oberholster noticed that smoke was impacting the quality of the wine.

While not directly involved with the research on smoke taint, Girardello’s role in the Oberholster lab includes making the wine, harvesting the grapes and choosing sites to draw samples from, depending on smoke exposure from fires.

Girardello is working with clones of grape vines that produce the popular wines Cabernet Sauvignon and Merlot. The clones have the same genetics but have different characteristics, such as color.

The effect of climate change on the vines is studied in harvests throughout different seasons. A comparison is made between the different years on how dry and hot the season is, according to Girardello. For example, when there are heat waves, the method of controlling water irrigation is studied and observations are made to determine if adding more water will decrease the impact from the unusually hot temperatures.

Another researcher interested in how climate change affects grapes is Kaan Kurtural, a professor of viticulture at UC Davis who conducts research on rootstocks and clone combinations that display potential in achieving drought tolerance. His research on this topic is ongoing and results are yet to be determined.

Kurtural also works with the Oakville Station by conducting trials on how climate change affects wine production. One of the trials consists of the production of Cabernet Sauvignon. The grapes grown for this wine are protected from the sun by shades that filter different spectra of solar radiation. Examples of the light filtered are ultraviolet A, C and infrared light. The purpose of these different filtrations is to compare the responses of the plants to each one, according to Kurtural.

Kurtural is not worried about climate change affecting the production of grapes due to the many technologies being invented that allow them to be grown almost anywhere in California.

“We are not going to run out of grapes anytime soon,” Kurtural said.
Written by: Francheska Torres — science@theaggie.org