Cops Off Campus walk out commences Abolition May 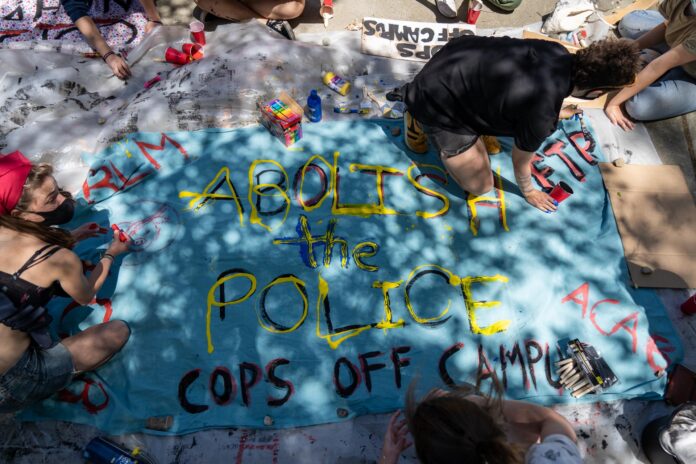 The Davis group, composed of students, faculty and staff, gathered on the Quad calling for the abolition of campus police

The UC Davis Cops Off Campus group participated in a nationwide day of refusal on May 3 to demand the removal of campus police, kicking off Abolition May. The walkout was the first event of a series of Abolition May events.

In lieu of class and work, about 100 students, faculty and staff attended a gathering on the Quad where attendees made signs for the upcoming May 24 rally, according to Amanda Kong, an English Ph.D. candidate and Cops Off Campus member. Beyond conversations about abolition and community safety, there was music, screen printing and zine swapping.

The national Cops Off Campus Coalition, which spans over 40 campuses “across Turtle Island” suggested a variety of other local direct actions to engage in Abolition May, according to their website. Among the suggested actions are street puppet theater performances, holding a town hall (without administration) and letter writing to the administration.

The UC Davis group stuck to zine distribution and dancing on the transnational day of refusal in which participants withheld all university-based labor including attending Zoom lectures, teaching and corresponding via email.

Chancellor Gary May said that he was aware of the walkout. May has previously addressed faculty demands for immediate abolition, referencing the plan as “not necessarily a constructive or complete one,” and endorsing the Next Generation Reforms to Advance Campus Safety Task Force. The task force will make their final recommendation in June.

Joshua Clover, a UC Davis English literature professor and Cops Off Campus member, participated in the walkout. Clover said that he doesn’t care what the current administration thinks, asserting that abolition is certainly achievable as opposed to merely a lofty ideal.

Kirin Rajagopalan, a cultural studies Ph.D. student and Cops Off Campus member, stressed solidarity as being a critical component of organizing.

“Most importantly, refusing work and class actually strikes a tangible blow at the university as an institution,” Rajagopalan said. “I think it sends a powerful message, just like wildcat strikes from last year sent a message, that we can come together and we can act without being mediated by a union or a task force.”

According to May, the walkout had no impact on campus operations.

“I know people who are calling for abolition have been well-represented in a lot of those meetings,” Farrow said. “So their voices are certainly being heard. I think people are very keenly aware of the position which they represent.”

Many students received mass emails from the UC Davis Cops Off Campus group advertising the walkout and other upcoming events including the May 24 rally. The UC Davis rally and noise demo precedes the culmination of Abolition May with national action among Cops Off Campus groups on May 25, the anniversary of the murder of George Floyd.

Karan Brar, a fourth-year managerial economics major and chairman of the Davis College Republicans (DCR), said he and his fellow DCR associates were surprised to have received emails from Cops Off Campus.

“I think their ideology is definitely destructive and detrimental to communities,” Brar said. “If there is a conversation to be had about policing reform and certain tactics, I think we can have that conversation, but abolition is just an extreme proposal. Even many progressive senators like Bernie Sanders and Elizabeth Warren—they’re not for it.”

Clover recounted that most Americans disapproved of Dr. Martin Luther King Jr. during the civil rights era—noting that in a poll of U.S. citizens, a mere 30% indicated that they supported Dr. King.

Cops Off Campus is peaceful and non-destructive, according to Kong.

“It’s not divisive or harmful,” Kong said. “I think a lot of people are like, ‘It’s so harmful to us as a community.’ The police have literally harmed members of our community.”

The UC Davis Police Department (UCDPD) has described itself as unlike a traditional law enforcement unit. Farrow said that campus police are not on campus to police students, faculty and staff.

Kong said that she is skeptical of UCDPD’s self-described progressive approach.

Farrow said that UC Davis is in a new era of policing since the pepper spray brutality incident. He advocated for discussion among all parties and taking small steps.

“Policing is different today at UC Davis than it was 10 years ago when pepper spray happened,” Farrow said. “It’s just totally, totally different. I don’t know if I’d ever get to the point where I’d actually accept or tell people that abolition is the answer. Certainly on the road to abolition there are meaningful conversations that could take place and we could deal with things in small steps.”

UC Davis, along with five other UC campuses, increased UCPD’s 2020-2021 budgets despite summer 2020 protests calling for divestment and reallocation of funds.

The greater Cops Off Campus coalition demands that UC and CSU campus police are gone by fall 2021. UC Davis Cops Off Campus organizers said they want to see police off campus immediately, but some acknowledged their vision isn’t one that can be fulfilled overnight.

Campus police departments are not standard at colleges and universities in other parts of the world, according to Clover.

Within the U.S., only 38% of private universities housed a campus police department (compared to 92 percent at public institutions), according to a Bureau of Justice Statistics 2011 survey of campus law enforcement agencies.

“Given that the presence of police on campus is just a ludacris absurdity which for some reason people have gotten used to and think is natural and reasonable, I think there is a real chance of getting rid of it because ludacris absurd outliers often melt away,” Clover said. “Whether this administration will be the one that does it, I don’t know, but the point is if they won’t do it, then we’ll get rid of them.”
Written by: Rebecca Gardner — campus@theaggie.org

New Aggies submit their Statement of Intent for fall 2021