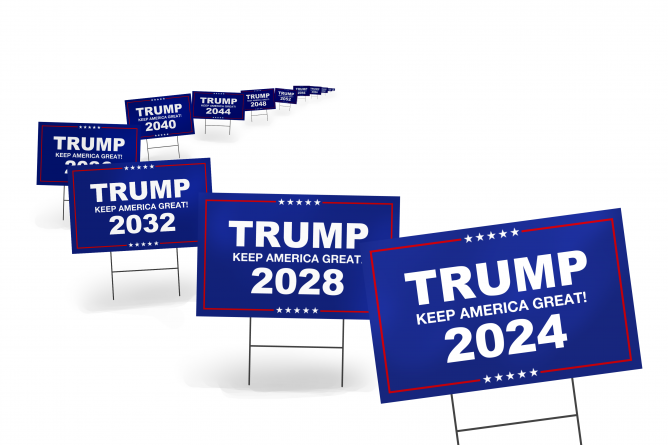 Isaac Hale, a professor of political science, explained how Trump’s rhetoric has shifted the Republican Party over the past four years.

“In comparison with previous Republican presidential candidates like Mitt Romney or John McCain, Trump ran with a much more populist message,” Hale said. “When I say populist, I mean a more economically liberal and socially conservative message. Trump ran on things like the wall, but he also ran against George W. Bush’s wars in Iraq and Afghanistan. He also ran on protecting Social Security and Medicare, which again was a very strong contrast to previous Republican candidates. But the thing to keep in mind here, is that’s not how they actually govern.”

Christopher Hare, an assistant professor of political science, had a similar perspective on how Trump has moved the Republican Party in a more populist direction. Hare noted that two prominent shifts have been in terms of the style and substance of governance.

“In terms of style, the party has become more confrontational and suspicious of elites,” Hare said. “On substance, the party has deprioritized traditional Republican goals of reigning in government spending, entitlement programs and the national debt. At the same time, it has shifted positions considerably on other issues like immigration and trade. Some of these trends were present before Trump, but [he has] catalyzed these trends more firmly and established them among the Republican Party establishment.”

According to Hale, Trump’s time in office was similar to previous Republican presidents. However, the rhetoric Trump used throughout his time campaigning and in office set him apart from traditional presidents.

“I think the effect of Trump’s words will have great reverberations,” Hale said. “I think we will continue to see much more Trump-like candidates going forward, but I don’t think we will see a drastic realignment of the party away from its policy.”

Since 2016, media platforms have become a battlefield for Trump supporters and opponents to voice their opinions on American politics. Hare explained how the media has influenced the political climate over the past four years.

“The media plays an amplifying role, but there are also real fundamental differences within and between the parties,” Hare said. “I think the media is sometimes unfairly scapegoated as the primary or even sole cause of polarization, but the reality is much more nuanced.”

Seeta Chaganti, an English professor, discussed how the extent of hate speech might change in the media following President-elect Biden’s inauguration.

“On the surface, the official specific rhetoric that floats into everyone’s lives during the current administration might feel different: less hateful and violent towards particular groups,” Chaganti said. “Whether that will actually mean significant policy and social change that will meaningfully protect those groups from the historical harm and dispossession to which they’ve been subjected, I’m not sure.”

During the Trump administration there has been a rise in accusations of fake news from both the Democratic and Republican parties. Chaganti described the extent to which fake news has had a polarizing effect on the two parties.

“I think it’s hard to talk about what people actually believe versus what they are instrumentalizing in order to justify what they’re doing,” Chaganti said. “Fake news definitely offered people a lot of instruments. It did seem to be the case that people who identified with different political affiliations were watching very different news sources. So, there has been this disorienting sense that wildly differing stories about what was happening on the same news day were out there. But I don’t know if that’s fundamentally different from other moments.”

Within the Republican Party itself, Hale noted that there is not as much polarization surrounding Trump’s actions as the media portrays.

Since Biden was announced the winner of the 2020 election, there have been accusations of voter fraud. Several polls have found that up to 70% of Republicans are doubtful about the results. Hale commented on how these numbers might influence support for President-elect Biden in the coming years.

“I don’t think that it’s going to affect governance very much,” Hale said. “Democrats viewed President Trump [as] illegitimate in large part due to the electoral college inversion that happened in the 2016 election. But despite that, Trump had a large number of incredibly consequential policy accomplishments like the tax cuts and appointing three Supreme Court justices—and I think the same pattern will follow for Biden.”

The attack on the Capitol was just one severe instance of the opposition to President-elect Biden’s confirmation. Chaganti described the possibility of future riots and the effect they will have on the general public.

“It does seem possible [that the riots will continue] and I am interested to see the response,” Chaganti said. “One result of the Capitol events on [Jan. 6] is that it became very clear how many in that crowd were [law enforcement] and military. And of course there’s the question of why on-duty officers let it go as far as it did. Maybe this is optimistic of me, but I wonder if that has made clear to an even wider mainstream what kinds of deep historical racist structures we’re talking about when we invoke concepts like ‘law and order,’ a phrase that gets used variously to describe both parties.”

Hale explained how the pattern of the division in Congress will be detrimental to the future of our democracy.

“Compared to 30 or 40 years ago, legislative productivity in Congress [has] incredibly declined,” Hale said. “And that’s especially true under a divided government. When one party controls Congress and another controls the White House, that will tend to be the case.”

However, the trend of distrust in the election process is not a Trump-specific story but rather a long-term trend. According to Hale, there has also been a trend of violence among the parties due to election results as of late.

Moving forward, Hale believes that although there will likely be Trump-like characters in American politics, it is unlikely that other politicians will be able to mimic Trump’s messages and political base.

“We have already seen 2024 presidential hopefuls like Senators Josh Hawley, Ted Cruz and Marco Rubio using Trump-like messaging and really trying to position themselves as the next Trump,” Hale said. “But I think that this will be a tough sell because Trump has a particular sway within the Republican Party, and the fact that he was a reality TV star before becoming president is not something that every U.S. senator can replicate.”

Hale noted that Trump’s experience in the entertainment industry largely influenced his reach as a candidate in 2016.

“I think, particularly in the Republican Party, we are going to continue to see outsider candidates like Donald Trump,” Hale said. “I think we are going to continue to see them doing well and trying to repeat the success of Donald Trump. But, I don’t think they will be as effective because Trump has a made-for-television personality, and his background gave him a lot of free media coverage which really helped him out in the 2016 election.”

Hale discussed the possibility of Trump running for re-election in the next presidential term.

“I think it is certainly possible that Trump goes into private life,” Hale said. “I think it is very likely that he will stay in the public eye. But I am not sure if he will run for re-election in 2024. Grover Cleveland served for two non-consecutive terms as president, but it’s not something that happens very frequently.”

Hare stated that the future of red America will depend heavily on the evolution of the Democratic Party moving forward.

“If [the Democratic Party] continues to move left, I believe Republicans will be able to coalesce around an agenda to prevent European-style socialism,” Hare said. “The big question is whether the Republican Party attempts to rebuild a majority by cementing and adding support among white and minority working-class voters, or by recapturing college-educated, urban and, especially, suburban voters, who might be resistant to some of the policy proposals from the left wing of the Democratic Party.”