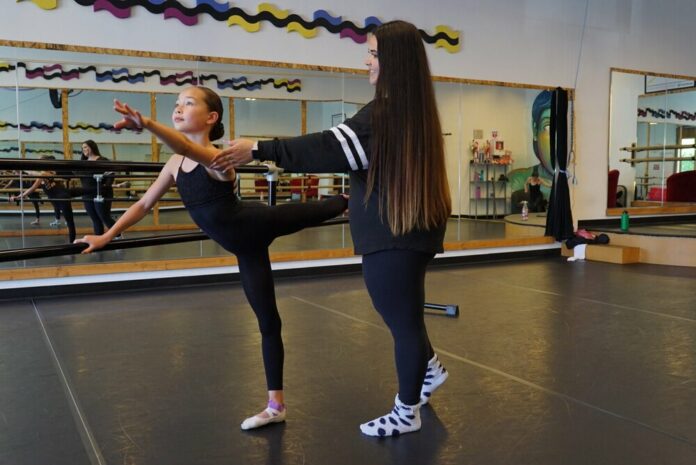 Along the hallway at Mirror Image Dance Company in Davis, California, the walls are lined with pictures of students, reminders about Spirit Week, the names of dancers with October birthdays on a green chalkboard and a floor-to-ceiling display of competition awards. At the end of the hallway is a large room, mirrors on both sides and barres on the walls — and in the corner sits a red throne, emblazoned with the letter “M.”

On a normal Monday, dancers in colorful leotards chatted with their friends waiting for class to start, the older girls practicing acrobatic tricks and the younger climbing on every available surface — except for the chair. One girl, new to the studio, walked over and was about to sit down when two more stopped her.

Marlaina Spivey is the co-owner and founder of Mirror Image Dance and is also a chemistry and biology teacher at River City High School. Growing up with two professional dancers for parents, Spivey’s been entrenched in the world of dance her whole life; five hours of ballet weekly was “the rule” in her house.

By founding Mirror Image, Spivey’s had the opportunity to reshape her relationship with dance and work toward changing the way the dance world works — specifically the competition dance world.

As Spivey walked into the room and sat down in her chair, holding a can of sparkling water with pink, bedazzled, inch-long nails, the group came to attention and gathered to sit in front of her.

The first competition of the season was the weekend before, so they planned to spend the class watching videos of their performance and listening to the judges’ critiques.
“Here’s how this works,” Spivey said before they began. “We’re not doing the self-disparaging thing that society tells us to do, where we go, ‘Oh my God, I’m so bad. I can’t watch myself!’ We’re a team. It’s about all of us together. Why do we listen to critiques?”
With well-practiced synchronicity, the dancers chorused, “To get better!”

One of the dancers asked Spivey for the team’s score, and two more quickly jumped in talking about a “perfectly-scored” performance they once saw on the hit reality TV competition dance show, “Dance Moms.” Soon, they were all talking about JoJo Siwa, Maddie Ziegler and all the perfect solos they wished were theirs. Spivey joined the conversation.

“You know, our studio has competed on “Dance Moms” before, and it’s fun to watch, but it’s fake,” she said.

She described the 11-minute-long feigned audience applause they had to participate in, the second staged award ceremony that followed the real one and the changed scores that were set up to heighten the Lifetime series’ drama.

“I’m not saying those dancers don’t deserve it,” Spivey said. “They’re beautiful dancers; they’re extremely talented, but it’s not real. I call it ‘compare and despair.’”

Spivey asked if the dancers know what that means, and when a sea of heads shook “no,” she elaborated.

“It comes from insecurity,” Spivey said. “You can see this thing in someone that you want. It happens a lot through Instagram.”

A girl sitting near the front of the group asked, “Or, like, with Barbie?”

“Yes! Barbie — that’s perfect.” Spivey said, welcoming the interjection. “God, I love you. But yeah, we are not that, and we don’t want to be that.”

This is part of Spivey’s philosophy: she deeply cares about the students she teaches, and she wants them to know that her care isn’t just an act — it’s the real thing.
“My goal is truly to show them genuinely how much I care about them,” Spivey said. “They know when you are feeding them bullsh*t, and they hate it. So I think what I make sure I do most is be genuine and honest.”

Along with showcasing talent and highlighting bonds between girls, competition is also known for cattiness, rivalry and body shaming. According to Spivey, the studio she was at before Mirror Image didn’t want to have a team because they didn’t like the culture of competitions.

“I can’t say I blame them,” Spivey said. “But I believed that I could do it in a healthy way.”
Apart from Spivey’s experience with dance, she also played soccer and basketball in high school. She said that part of what sets these sports apart from dance is that they have objective wins or losses because “it’s just about the number of baskets in a hoop.” She contrasts this experience to competing in dance, where a dancer’s validation comes from a panel of judges’ subjective opinions.

Back in the studio, Spivey popped open the can of sparkling water and pressed play on the first video. She commented on the judges’ remarks, lamenting the critiques — “It kills me, because we went over those transitions 800 times!” — but also highlighting successes — “You two hit your aerials every time, and I’m very proud of you.”
When the video ended, one dancer spoke up.

“Our timing was so off.”

“Yeah,” Spivey acknowledged. “But we can fix it, right?”

Though she explained that dance competitions can sometimes bring out cattiness and division, Spivey tries to focus on the unifying effects they can have.

“Competing with other studios with the right structure can remove in-house competition,” Spivey said. “It can provide dancers a place to shine, a place to become leaders, a place to belong — that’s what it did for me.”

“I’ll find it,” Spivey said. “And I don’t threaten; we have a conversation, teaching them communication, not this passive-aggressive stuff, which we use in such a gendered way.”
“Even there! I said ‘mean-girl,’” she quickly added.

Fostering this unity in a practical way can be hard, according to Spivey. The key? Getting the team in the same place at the same time and letting them talk.

“Even when you force them to do things they think are dumb and awkward, they can bond over it being awkward,” Spivey said, laughing. “One year I hid painted rocks all around the studio, and it was funny watching 17-year-old girls sprinting around the studio looking for rocks. But they’re together. They’re having conversations.”

As the competition video played on, the dancers took over Spivey’s commentary. One dancer nudged the girl sitting next to her and said, “You killed that turn.” Another turned around to tell the two behind her, “You guys always nail that part.”

Much like in other sports or careers or any group, there’s a certain language that’s only spoken by those on the inside. This is absolutely true for dance, Spivey said, and it’s part of the reason why many of her closest friendships were formed through it.

“The four people I still talk to from high school, they were all on my dance team,” Spivey said. “I didn’t realize it when I was younger, but dance really was such an outlet for me to grow as a human.”

She said she tries to make sure that the students at Mirror Image also grow — not just as dancers, but as people.

“I always try to choreograph something with meaning,” Spivey said. “I’ve taught about politics through dance, body image, relationships. I’m doing a piece on infertility this year.”
Despite her emphasis on care and empathy for her students, Spivey believes it’s important to “still have high expectations because they will meet them.”

She explained that this principle applies to her high school students at River City as well, some of whom she said come from homes where they receive less support. Spivey said that maintaining high expectations is how she shows she believes in their potential.

“I think sometimes we judge people for who they are and not who they can be,” Spivey said.

When class ended, the dancers left the room in a flood, breathing hard and sweating, waving goodbye to Spivey before restarting their conversations about school, their next class and life.

She called after them, “Goodnight! Love you all!”

Then, she picked up the empty can of sparkling water to toss in the recycling bin before her next class started a few minutes later.

“You really have an impact, whether you’re a good teacher or a bad teacher,” Spivey said. “That kind of started my philosophy, because I wanted to teach them science things, but I realized, I might love science, but they all are not going to be scientists. So am I using my tools to do the good I could do?”

While Spivey of course seeks to teach science and math in her chemistry and biology classes and proper technique in her dance classes, she said she also wants to teach something deeper than that in all of her classes.

“Dance is a tool to help guide young people,” Spivey said. “Many of them will never do anything with it after high school, and I don’t care. I just want them to be good people.”