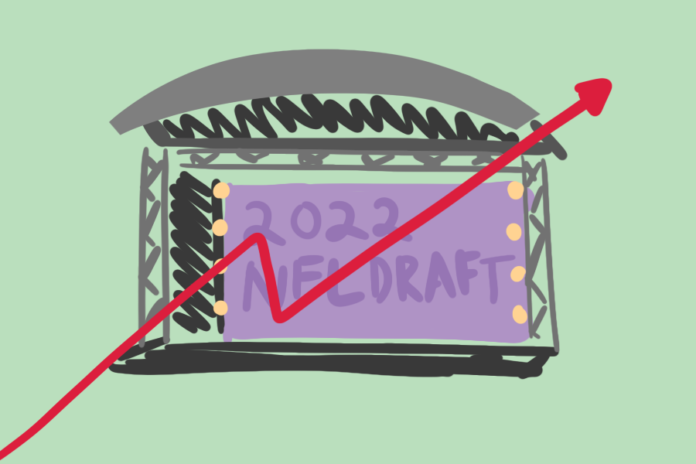 Chris Olave, Ahmad “Sauce” Gardner and others are making immediate impacts for their teams

In the NFL, it is essential that teams replenish their rosters with young talent from the draft each season. While not all rookie players’ first-year performances determine their future success, there are often a few rookies who immediately contribute on the field for their respective teams, leading them to become superstars. Some of the rookies from the 2022 draft class who are doing so are New Orleans Saints wide receiver Chris Olave, New York Jets’ cornerback Ahmad “Sauce” Gardner and multiple players for the Seattle Seahawks.

When the Saints lost their star wide receiver, Michael Thomas, during week three of the 2022 season, they needed another wide receiver to step up, and rookie Chris Olave did so. Through seven games, Olave has 37 receptions, 547 yards and two touchdowns. His best performance came during the previously mentioned week three game versus the Carolina Panthers, in which he racked up nine catches for 147 yards. Olave has also made multiple highlight-worthy plays, including a catch in traffic to get the Saints near field goal range in the last 30 seconds of their game against the Minnesota Vikings. With Thomas expected to miss the rest of the season, Olave will be the Saints’ primary wide receiver.

The Jets badly needed secondary help after the 2021 season — during which they gave up the third-most passing yards in the NFL. To address this issue, they drafted cornerback Ahmad Gardner with the fourth overall pick in the 2022 NFL draft. Through eight games, Gardner has only allowed 197 yards on 46 targets. He also got his first interception against the Dolphins in week five. Wide receivers have certainly been lost in the “sauce” when playing against Gardner and the Jets.

After trading away their franchise quarterback Russell Wilson for multiple draft picks during the offseason, the Seahawks entered a rebuild — or phase during which teams trade older talent and search for younger talent so that they can win in the future. With all of the contributions they are getting from their 2022 rookies, the Seahawks’ rebuild is progressing quickly. These rookies include offensive tackles Charles Cross and Abraham Lucas, running back Kenneth Walker and cornerback Tariq Woolen.

The Seahawks lost starting running back Rashaad Penny for the season in week five when he suffered multiple lower leg injuries. Luckily, they drafted Kenneth Walker in the second round of the 2022 NFL draft. In the three games that Walker has started since Penny’s injury, he has 62 carries for 315 yards and four touchdowns. In addition, Pro Football Focus tracked Walker as having the highest missed tackle rate (minimum 40 carries) among running backs so far.

Possibly the biggest steal the Seahawks acquired during the 2022 NFL draft was cornerback Tariq Woolen, who they drafted in the fifth round. Woolen showcased elite athleticism and phenomenal physical upside at the NFL combine after running the 40-yard dash in 4.28 seconds and showcasing a 42-inch vertical. Woolen earned a starting job and looks like he could be a star cornerback for the team. Through eight games, Woolen is tied for the most interceptions in the NFL (four) and has allowed just 278 yards. Quarterbacks have also had a below-average passer rating when targeting Woolen (50.8). Other NFL teams probably regret not selecting Woolen sooner.

There are a few other rookies worth mentioning. Houston Texans’ fourth-round pick, running back Dameon Pierce, has 121 carries for 539 yards and four touchdowns in seven games. Pittsburgh Steelers’ second-round pick, wide receiver George Pickens, is a fan favorite with arguably the two most impressive catches so far this season during weeks three and seven. The Jets’ second-round pick, running back Breece Hall, looked very promising before he tore his ACL during week seven and Jacksonville Jaguars’ first-round pick, linebacker Devin Lloyd, has 68 tackles and two interceptions through eight games.

Going forward, all of these rookies will need to continue to perform at a high level to help their respective teams during the second half of the season. While it is still early in many of the mentioned players’ careers, the 2022 NFL draft class looks like it could produce multiple superstar players.