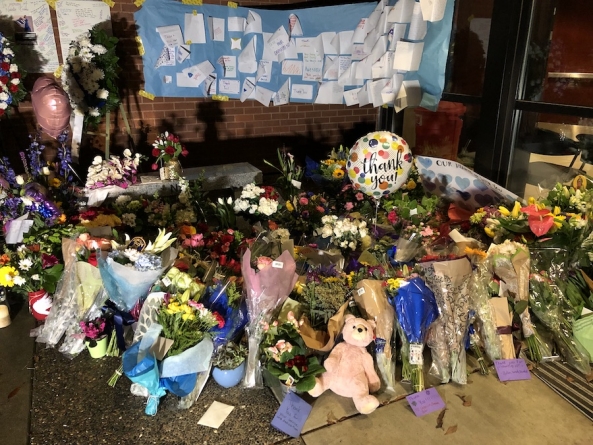 Almost three weeks after Davis police officer Natalie Corona was killed in the line of duty, ASUCD has released an official statement acknowledging the death after two resolutions failed to pass due to public criticism.

The statement, which mirrored the sentiment in Senate Resolutions #7 and #8, was first released publicly via ASUCD President Michael Gofman’s official Facebook page and focuses on Corona’s life, expressing the association’s condolences.

“Those around Natalie admired her mentality, for she was a hardworking individual who went above and beyond to pursue her goals,” the statement reads. “Natalie Corona is a hero for her dedication to protecting our community.”

While the statement as it appears on Gofman’s Facebook page is signed by a supermajority of senators as well as some unit directors and commission chairs, Senators Jumoke Maraiyesa, Brandon Clemons and Tony Chen’s names did not appear on the statement as signatories.

Maraiyesa declined to comment and Clemons did not respond to requests for comment. In response, Chen said he remains “neutral about resolutions and statements regarding Natalie Corona.”

“My vote and my action are based on my community’s response,” Chen said.

From his part, Gofman said that though he doesn’t want to comment on other people’s motivations, he believes “that outside of ASUCD, it is my belief that a majority of the students of this campus stand with our statement and the failed resolution in honoring Natalie Corona.”

The public release of the statement follows two failed Senate Resolutions: #7 and #8. Senate Resolution #7, authored by Ryan Gardiner, aimed to honor Corona and expressed the association’s support for local law enforcement. The resolution was withdrawn by Gardiner on Jan. 24.

Senate Resolution #8, authored by interim Senator Mohammad Qayum, expressed the exact sentiment of the failed SR #7. It aimed to honor Corona and “express support for officers like her.” One distinct change between the resolutions was the removal of a sentence containing the phrase “thin blue line” in exchange for broader support for law enforcement.

The ECAC posted a controversial statement on Jan. 11 to its since-deleted Facebook page criticizing the use of what was deemed to be the Blue Lives Matter flag in posts memorializing Corona. The Blue Lives Matter flag doubles as a symbol for the Thin Blue Line movement. The post, which drew national criticism, called the flag “anti-Black” and “disrespectful.”

Following both ECAC’s post and a wave of online backlash and criticism, ASUCD Vice President Shaniah Branson authored her own post on the official ASUCD Facebook page on Jan. 13 expressing condolences to Corona’s family and defending the right of ECAC to post the statement.

“While [the ECAC] acted within their by-lawful prerogative in releasing the statement, it does not speak for the entirety of the Association,” Branson’s statement read. “The aforementioned standard holds true for every group that makes up this Association.”

Gofman responded to the ECAC’s post via Facebook, calling it “disgusting” and urging ECAC to remove it and issue an apology. At a recent ASUCD Town Hall on Jan. 22 scheduled to discuss the controversy, Singh, the ECAC chair, said the commission stands firmly by its statement.

SR #8 was the subject of a two-hour discussion at the Jan. 24 Senate meeting. Members from the public expressed disapproval of the resolution because it voiced support for law enforcement, a position not everyone in the room agreed with.

“The official claim is that the resolution would not have represented the undergraduate body, however, I don’t believe that to be true,” Qayum said. “The resolution was written to honor Officer Corona’s life and after further amendments, the resolution read as a simple statement purely about her. If that is not representative of the student body, then it is a sad day for all of us.”

Eventually, after Senator Noah Pearl abstained and Senator Brandon Clemons effectively abstained due to his absence, a split vote was broken by Branson who encouraged Qayum to work on a statement authored with public opinion in mind.

According to Qayum, his resolution did not pass because “senators became nervous about a growing crowd and they did not want to anger them or take a controversial stance.” He subsequently made removals and additions using feedback from the community to draft the recently-released statement.

“People wanted more reference[s] to Officer Corona,” Qayum said. “And I agreed with those changes.”