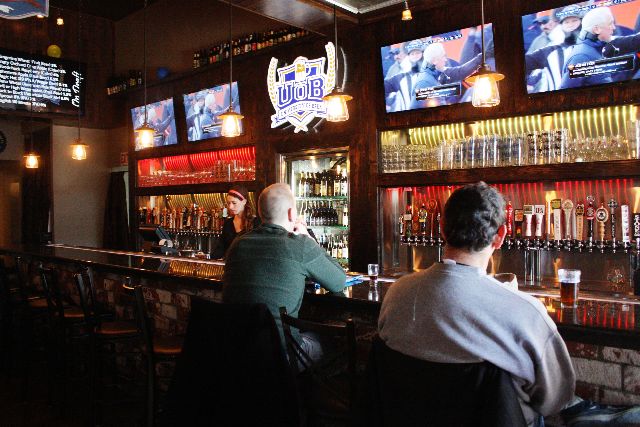 Last Thursday evening, downtown revelers and beer aficionados alike attended the grand opening of the University of Beer, the latest addition to an increasing number of drinking venues in downtown Davis. The new craft beer shop, located at 615 Third St., will serve only beer, with 60 different taps offering an extensive menu.

“What I want the customer to focus on is the beer. If you love beer, we have everything you’re looking for,” said Nate Yungvanitsait, the proprietor of the University of Beer, as well as downtown venues Red 88 Noodle Bar and KetMoRee. “It’s good to have a nice ambience, comfortable atmosphere and a cozy place to be, but if we don’t choose good beer it doesn’t matter how nice the place is. The beer is the experience.”

As the beers on offer are rotated regularly, the venue incorporates new digital technology, such as plasma screens and iPads, to keep its customers continually updated and informed as to which beers are currently being served.

It is hoped that the comprehensive range of beer will facilitate an informative learning experience, with patrons utilizing two free samples to formulate their own beer preferences.

“We want to get customers to try different beers so they can learn and find something they actually like. University of Beer is not just a place to drink. We want you to engage in an active learning experience about beer,” Yungvanitsait said.

Plans in the future to enhance the educational element include informative visits from local breweries and the implementation of a “study hour,” in place of the more familiar “happy hour” tradition associated with drinking haunts.

Although formally open two weeks prior to the event, Thursday’s opening was intended to coincide with the return of college students to Davis following the winter break who, as the venue’s name suggests, will make up a significant part of the bar’s clientele. While initial feedback on online forums presented a mixed reception to the bar, patrons attending Thursday’s event were much more positive.

“It turned out a lot more comfortable and relaxed. We were skeptical mainly because of the feedback on Davis Wiki, but so far it’s exceeded our expectations,” said Sarah Lewis, an attendee at the opening.

Others celebrated the fact the new bar provides revelers with more choice of where to go on a night out.

“About five or six years ago, there weren’t very many bars in the downtown area. Now more are opening, which is great because you don’t end up spending your evenings at the same places,” said Clay Delong, another attendee at Thursday’s event.

It remains to be seen how the University of Beer may affect local businesses, though competing bars remain optimistic that having more people out on the town can form the basis of a mutually beneficial relationship.

“It’s yet to be determined how University of Beer will impact us. They have a great selection of beer and facilities, but the more traffic there is downtown, the better it is for all of us,” said Taylor Ramos, manager at The Davis Beer Shoppe.

That the two bars could thrive from increased footfall in the downtown area was a sentiment echoed by Yungvanitsait.

“As far as competition goes, enjoying beer is more important,” Yungvanitsait said. “I hope the customer can enjoy beer here, but if they want to go someplace else, as long as they’re enjoying beer, that’s OK.”

JOE STEPTOE can be reached at city@theaggie.org.