The Ethical Hedonist: The Tale of the Almond Croissant 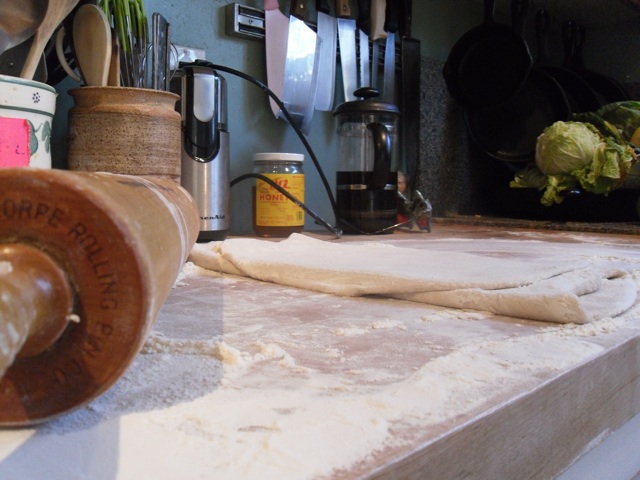 My 40-day adventure into veganism last year was not without its hiccups. The stint began almost on a whim, the morning of Ash Wednesday. Having decided on this diet change the morning of, my refrigerator was still full of various non-vegan items I’d purchased earlier that week. Stoically, I surrendered groceries to my housemates, a process made all the more painful because I was too broke to replace them with their vegan counterparts. Every morning for two weeks I would wake up, make myself a strong cup of coffee, and then grumble as I realized my perfectly good half and half was no longer a viable additive. This moment was typically followed by a mental checklist of things I could no longer eat: fancy cheese, butter on my toast, the dinosaur oatmeal my mother had just sent me. My mood soured with my abandoned half and half, and it was suggested on more than one occasion that I consider becoming an “afternoon vegan.” By the third week in, however, I was more adept at navigating these waters with a smile… or so I thought.

The day began like many others had, with a decision to skip breakfast in order to make it to my 9 a.m. class by seven minutes after. A sheepish grin to my Spanish professor later, I was sitting all too comfortably in my creaky plastic chair and becoming increasingly aware that my body, deprived of both sustenance and caffeine, was not fully capable of wakefulness. Driven by an earnest desire to take coherent notes in my next class, I decided to grab a morning snack at the nearest Cargo Coffee stand. I bought a coffee with soy milk and an almond croissant. It wasn’t until I sat down in the equally squeaky chair of my next class, gave an equally sheepish grin to my professor for the sound that digging into my paper bag was making and tenderly brought that wonderfully flaky confection to my lips that it occurred to me: “Mother Uhker. There is hella butter in this.”

Though the Coffee House does consider ethical sourcing a priority, tracking down the dairy farms whose butter and milk goes into any one of their baked goods would be a difficult task given the number of local bakeries it could have come from. Thus, the best way to ensure that you consume ingredients you support will most often be to buy and bake with them yourself. If it’s a vegan croissant you’re jonesing for, might I suggest yummly.com whose relatively simple vegan croissant recipe could easily be used with whichever milk or butter ingredients you feel most comfortable with. As a note, however, baking croissants yourself will be a somewhat labor intensive affair no matter what ingredients you’re using. This particular recipe, though simplistic in process, requires five and a half hours of prep time and more than half of that time is split up into short intervals of waiting for the dough to chill or rise.

I made this recipe myself over the course of two days rather than in a single five-hour stretch. The end product was tasty enough for your average co-oper, but certainly not of the caliber I enjoyed in luscious sin last spring.