Biking in the rain, not a walk in the park 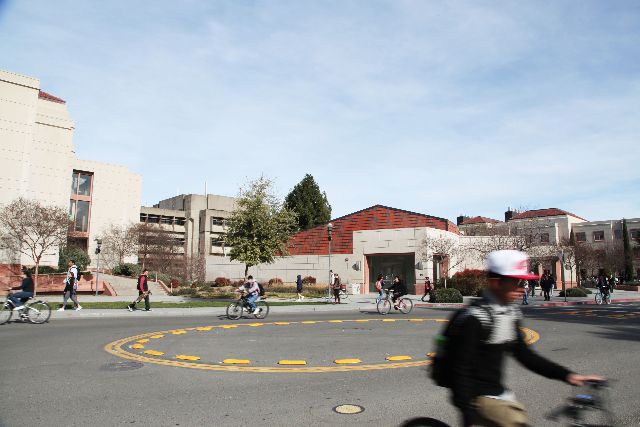 During last week’s rainy days, many of us were splashed with the infamous “Freshman Stripe” — an embarrassing phenomenon that occurs when your bike tires splatter your back with muddy water. A lot of us also cringed when our buses drove up with foggy windows. Then we endured the discomfort of being tightly packed in it.

For the even more unfortunate, however, rainy days are also bike-crash season. While arguably there are fewer bicyclists on campus in the rain, the hazards of a slippery road are also greater. Some people may even argue that students lose all biking abilities when it rains. Both the transportation and police departments are working to minimize the risks of accidents through roundabouts and other features.

With over 22,000 bicycles on campus every day, the probability of accidents seem great. However, there have only been approximately 600 reported bicycle accidents in the past 10 years (five per month) according to a report from the fire department. Still, this does not account for minor accidents when students hit a curb or fall off their bike because they are texting. Well over 90 percent of bicycle accidents are not reported, according to Cliff Contreras, Transportation and Parking Services (TAPS) director.

“There are accidents, [but] the majority are minor,” said William Beermann, UCPD representative. “I think the majority of accidents involving vehicles are reported to the police department. The accidents that are caused by a single bike are probably not reported, but those are minor — maybe not even to a point of a scrape or a bruise. I think that as a campus, we’re very safe as far as bikes go.”

The 17 roundabouts on campus help reduce biking accidents by providing a more fluid flow of traffic. The construction of the new roundabout on Hutchison Drive and Bioletti Way replaced a stop sign, which some students seemed to disregard. Constructed during Martin Luther King Day weekend, it was in place by Tuesday, Jan. 22.

As Tercero South Residence Halls continues to grow, Takemoto-Weerts said he anticipates there will also be increased bicycle traffic on Bioletti Way and onto campus.

The new roundabout is only part of the project to make the Hutchison/Bioletti intersection safer. Around 400 to 500 students pour out of the Science Lecture Hall every hour onto Hutchison Drive, keeping the street busy throughout the day and adding to the constant foot and vehicle traffic.

“That area where the roundabout is now has been notoriously a problem where a lot of bicyclists don’t stop,” Contreras said. “It creates problems for traffic and pedestrian circulation, so we believe that this will mitigate some of that.”

The existing construction found at the Hutchison/Bioletti intersection is a current gate construction project and improving the parking lot. The gate on Hutchison Drive and California Avenue is the current campus-enclosed core perimeter, but the new gate will extend the boundary, where there will be little vehicular access. The project is funded by TAPS and Unitrans, and aims to create a safer environment for bicyclists and pedestrians. The gate is anticipated to go up in the next several weeks, according to Contreras.

“When you see class breaks on any day of the week, we believe that trying to go down Hutchison [Drive] is very dangerous for anybody involved in that movement, and we don’t want any vehicles in there during [breaks],” Contreras said. “So we created [the roundabout] and improved the parking lot to complement the gate.”

The only routine vehicles permitted through the gate will be transit and campus service vehicles. A kiosk will also be built to allow communication for other vehicles that need access to the core.

As part of enforcing bike safety, TAPS and the police department formed a partnership to create and implement different programs. The Bicycle Education Enforcement Program was developed through this partnership, and is an online training course about bicycle safety and regulations. Starting last October, they also implemented an ongoing bike light giveaway program. Bicyclists with no bike lights will be stopped by a police officer, talked to about bike safety and given a bike light instead of a citation.

“It’s a form of education, encouragement to ride safely and to utilize the safety equipment,” Beermann said.

Future plans to improve bicycle safety include developing a scramble phase on La Rue Road and Orchard Road, which is a light signal allowing only pedestrians and bicyclists to move. Another bicycle roundabout will also be placed at the California Avenue and Shields Avenue intersection this summer.

During the rainy days when students aren’t biking in the dark or through roundabouts, many are found in Unitrans buses complaining about how crowded it is. Some wonder aloud why Unitrans doesn’t send them a spacious double-decker bus instead.

In fact, there are only two vintage and two modern double-deckers. Buying another one would cost about $800,000.

“We don’t have that many double-deckers because they’re very expensive and they’re all diesel-powered,” said Anthony Palmere, Unitrans manager. “Because we’re in an air quality nonattainment area, we’re restricted in how many diesel buses we can have. We have the natural gas buses, so we’re on what’s called the alternative fuel path. It’s difficult for us to get diesel buses unless we’re also getting natural gas buses at the same time. We don’t have the funding to buy either kind of bus right now.”

Palmere also explained that crowded buses are one of the reasons UC Davis is a sustainable school. Dividing out the carbon footprints of the people on the bus, the emissions per person is low. They are even lower on a bicycle. But rain allows you to hold onto your environmentalist credit aboard the bus while avoiding that stripe down your back.

JOYCE BERTHELSEN can be reached at features@theaggie.org.