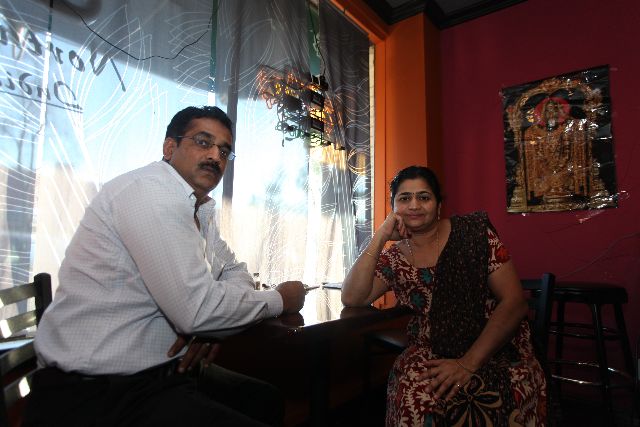 If there’s one thing that Davis has no shortage of, it’s Indian restaurants. However, Preethi Indian Cuisine, one of the newest additions, is a little different.

While the restaurant serves the typical variety of Indian food that most people are accustomed to, it also has a selection of South Indian specialties, like dosas.

Nanda K Immareddy and his wife Krishna opened Preethi in May of 2012. It is an entirely family-owned restaurant, with Immareddy’s relatives working in the kitchen, and the family has been in the restaurant business for over 25 years.

If the “FREE WI-FI ACCESS” sign outside the front door isn’t enough to draw you in on a cold, rainy night, a peek through the window at the décor will definitely do the trick. As soon as I opened the door, I was surrounded by bright orange and magenta walls, one of which was filled with a floor-to-ceiling mural of a Buddha. Other decorative items include an adorable elephant statue, colorful metal sculptures on the walls, another Buddha on a room divider and a flat-screen television that plays a loop of movies to enjoy while dining. The warm tones and ornamental pieces make the two-roomed restaurant friendly and inviting. One complaint: the tables along the wall are a little close together.

After my two friends and I were seated, we spent a good fifteen minutes perusing through the rather extensive menu trying to pick out a variety of items that still fit within our seniors-in-college budget. It was admittedly difficult to decide, because the menu is filled with so many appealing dishes that range from the standard chicken tikka masala ($11.95) to the more adventurous goat korma ($12.95). Luckily, the server, donned in a traditional sari, brought us complimentary papadums — a typical Indian cracker snack served with two types of chutney — to hold us over while we made our decisions.

Eventually, we decided on splitting a masala dosa ($5.95), chicken tikka masala, lamb biryani ($12.95), and chicken vendalu ($10.95). The menu lends itself to a lot of consumer choice — all entrees come either a la carte or as a full dish, include a choice of naan or rice, and can be prepared mild, medium or spicy. We went for a la carte all around because it saved us roughly $3 on each dish — bringing the average entree price down from $15 to $12 — and decided to order both naan and rice to go with our mediumly-spiced entrees.

If you go to Preethi for just one thing, go for the masala dosa, one of the restaurant’s South Indian specialties. If I were on the Food Network show “The Best Thing I Ever Ate,” which I often wish I were, this appetizer would be on my list of things to talk about. “Appetizer” isn’t the best word to describe it though; the thing is literally the size of an arm. It’s a long, rolled up semi-crispy crepe made of lentils that tastes like sourdough bread, filled with a vegetable curry containing roasted potatoes, carrots and peas. It also comes with an onion gravy soup — sambar — for dipping, giving it an even fuller flavor. I’m not sure what the proper etiquette is for consuming dosa, but my friends and I ripped it apart with our hands and destroyed the thing within about five minutes.

The vendalu and tikka masala, which are the two Indian dishes that I always seem to order, were also incredibly satisfying. The vendalu, which is an onion curry seasoned with a variety of Indian spices, was delicious but tasted about the same as others I’ve had before. The tikka masala, however, was richer, creamier and more buttery than most, and isn’t very spicy either.

Preethi also specializes in biryani, or basmati rice pilaf, and offers six different varieties. We ordered the lamb version. But meat aside, the dish has so many flavors, like saffron, basil, lemon and other Indian herbs and spices.

For Indian food beyond the typical scope of Davis dining, pay a visit to Preethi. While it’s certainly more expensive than a Raja’s lunch buffet, it’s about in line with other Davis Indian restaurants in terms of prices (three of us shared all of the food and paid about $18 each with tip and tax). When I return, I will probably focus mostly on the South Indian specialties and will try out the bar, which features Indian beers and wines as well as $3 beer on tap — always a plus.

KATIE MORRIS can be reached at kemorris@ucdavis.edu.