Inside the Game with Corey Hawkins 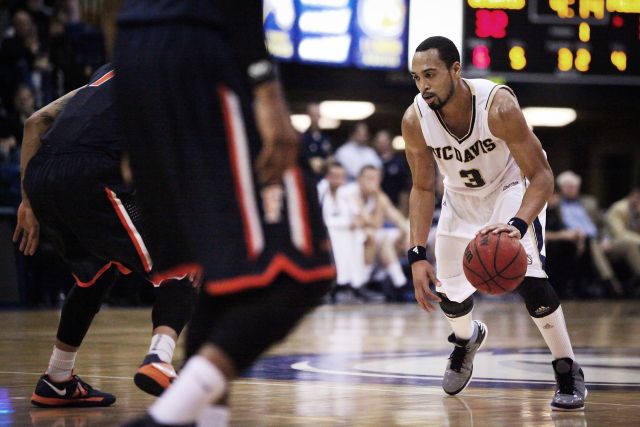 The UC Davis men’s basketball team has brought an entirely new look to the courts this season after a disappointing 2011-12 campaign.

Part of that fresh start has been from the revitalizing spark that sophomore Corey Hawkins has provided for them.

It can be said that basketball is in his blood, as his two brothers also play basketball and his father, Hershey Hawkins, was a successful 13-year NBA player.

Hawkins has been a force on offense and hit the game-winning shot against Cal Poly in a thrilling game at home.

He recently sat down with Aggie Sports Writer Kim Carr and discussed his new career at UC Davis, life with a former NBA player as a father and what it is like being in a family passionate about basketball.

Aggie: You played your freshman year at ASU. How is the atmosphere different here?
Hawkins: ASU is a bigger school with more people and bigger facilities so it’s a little different than here. There’s a different energy here though. People definitely take academics way more seriously here at Davis though.

What pushed you to transfer to Davis?
Actually, when I transferred I ended up transferring late. Coach Les called my dad to tell him he had gotten a coaching job here and he had played with my dad in college so it just worked out for me.

How much did your dad coach you as a kid?
He definitely helped me. When I was starting off he guided me but he was also playing [in the NBA] at the time. So he was away for games quite a bit. But even just being able to go to his practices and use those facilities was a huge advantage.

Obviously he’s helped me but I’ve gotten a lot of help from my teams and playing [with] my brothers. It was a nice combination of both.

How is Coach Les as a mentor?
Oh, he’s awesome. He’s a player’s coach and he knows when guys get tired during the season and need some rest but he knows when to push you too. He really has everybody’s best interests at heart.

Do you have aspirations for the NBA?
Definitely. That’s what I’m in it for. I have to keep working on it. I’m not there yet but I’ve still got two more years and I need to keep progressing within the team and individually and just keep on winning.

What would you like to do after the NBA then? Would you still want to be involved in basketball in some way?
Absolutely. My dad works for the Portland Trailblazers in the player development department. My major revolves around social media and mass marketing so I would like to use that. You know, I love the game too much to not be around it.

You have a weird knack for taking off-balance shots and Coach Les has touched on your gift for landing the fade-away jumper. Have you always had that ability?
Yeah. I mean honestly when I was a kid I would go to the gym and throw up shots, run over to the ball and throw it up again.

I saw when you were warming up for the game against Cal State Fullerton you just lobbed it up in the air from half court and it swished right in.
That was just luck. I don’t know how to explain it. I just try and keep focused on the shot all the way through, I guess.

What are your warm-up songs?
Honestly it depends on what kind of mood I’m in. If I’m tired when I hit the gym I want to listen to something that’s going to pump me up. Usually some kind of hip-hop or rap — I don’t like slow songs. A lot of Kendrick Lamar, The Game and anything with a pump-up feel to it.

You’re currently shooting 92 percent from the free throw line. What is your mental process when you’re getting ready to take the shot?
I set my feet, spin the ball, take three dribbles and then I spin again. I spin it for me and take my dribbles for my mom and each of my two brothers then I spin it again for my dad. Then I tell myself “Good shooters make their free throws every single time.”

What’s been your favorite basketball moment at UC Davis so far?
It had to be the game winner against Cal Poly. Yeah, for sure. That was, that was … well, I’ve never hit a game winner like that.