The big picture is sound 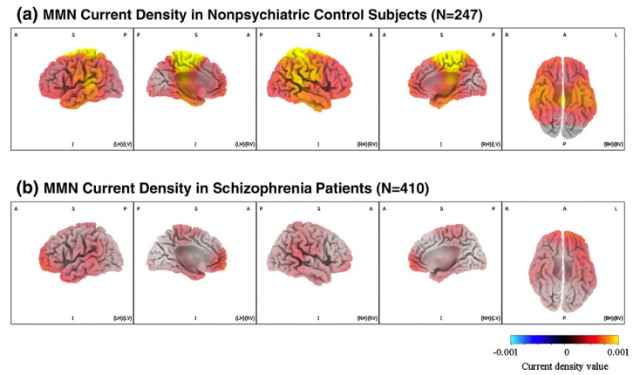 Through the use of electroencephalography (EEG), researchers are able to follow the pathways that are activated in the brain from the time of the stimulus up until the higher brain processes.

Schizophrenia is a mental disorder characterized by symptoms that fall into two categories: positive and negative. Positive symptoms are those that are associated with psychosis, and include delusions, disordered speech and thoughts and hallucinations. The negative symptoms are generally a bit more complex and can affect one’s quality of life. They include, but are not limited to, apathetic behavior, alogia (impoverished speech), lack of motivation, and even lack of desire to form relationships. Although there are medications that can help suppress these symptoms, they generally only mitigate the positive symptoms.

“The medications treat psychotic [positive] symptoms pretty well, but don’t really treat the negative symptoms. What’s unfortunate is negative symptoms are a stronger predictor of one’s ability to function in the environment than positive symptoms,” said Michael Minzenberg, an associate professor of Clinical Psychiatry at UC Davis. “Negative symptoms on the other hand are more disabling because if people are socially disconnected or unable to think clearly … they can’t get a job and adequately take care of themselves.”

Currently, the only treatments are pharmaceuticals.

“There have been significant advances in the last 15 years with the introduction of atypical antipsychotic drugs, heralded first by clozapine and followed now by other drugs,” says Ralph Hoffman, a professor in the Department of Psychiatry at Yale University School of Medicine.

The causes of these symptoms are still not completely clear, but recent research by Gregory Light, associate professor of psychiatry at UC San Diego and senior author of the study, may help predict the severity of the symptoms. In a series of simple auditory tests (which include playing tones within roughly a half second of each other) and the use of an EEG, Light’s team was able to map the neural circuitry of where a schizophrenic patient’s brain suffers deficits and abnormalities in the presence of auditory stimuli.

“The research studied two major parts of an auditory response complex. The first is called mismatched negativity, or MMN. It starts to occur about 1/20th of a second after a sound is presented … called an infrequent unexpected stimulus. The second part of the response complex is called P3a,” Light said. “The first figure shows patients have MMN deficits in isolated areas at the medial frontal cortex. At the second part of the wave, P3a shows there are deficits across large sections of the brain. So taking those two pieces together suggests that impairments at the earliest stages of sensory discrimination start off in relatively isolated areas and propagate forward to produce large-scale dysfunction in attention.”

These processes all occur within fractions of a second, and can help explain some of the causes for the positive symptoms such as auditory or visual hallucinations. This explains why schizophrenia patients are unable to detect certain social cues and subtleties such as sarcasm or a raise in vocal tone. The pathway in which these stimuli travel also explains why there are so many symptoms; the widespread propagation of the signals affect different portions of the brain, making it difficult for the mind to piece together simple external inputs. The experiment isn’t just limited to sound inputs either; these same patterns are shown in other sensory cortices such as those dealing with visual and tactile inputs.

With this new research, Light hopes to create possible treatment plans that involve conditioning schizophrenia patients to recognize and respond to certain stimuli.

ALLEN GUAN can be reached at science@theaggie.org.