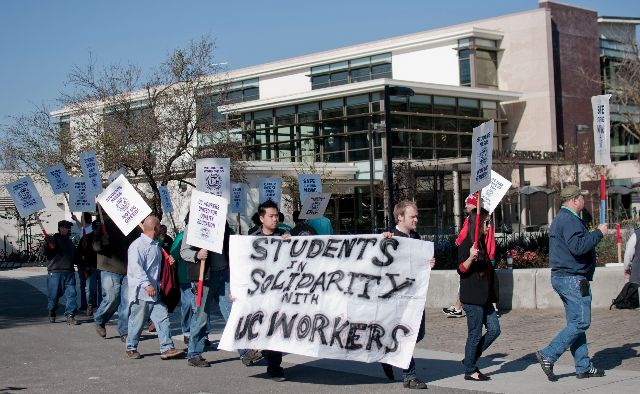 Union members of The American Federation of State, County and Municipal Employees (AFSCME) 3299 picketed at the three UC Davis Dining Commons in opposition with their new University contract last Thursday. A rally was also held at the UC Davis Medical Center in Sacramento.

These protesters were among UC workers and medical center staff all over California who took part in Thursday’s statewide demonstration. The workers included janitors, cooks and gardeners on campus. Many of these workers had contracts ending at midnight last Thursday.

The new contract proposed by the University would include fewer retirement benefits for new workers, an increase in the amount current and new employees must pay to pension and no wage increases.

Shelly Meron, University of California Office of the President media specialist, said the University is addressing the retirement program to provide more aid to retirees by asking workers and students to pay more.

“We prefer to negotiate at the bargaining table,” she said.

She added that 14 unions across the UCs have agreed to the retirement reform measure.

Workers are protesting against the University’s pension reform. The University is trying to negotiate a 24 billion-dollar unfunded liability that has triggered workers to protest, according to Meron.

“It’s not the best, but it’s better than the new contract,” said Marcos Jimenez, a union representative for the University Professional and Technical Employees Union (UPTE), in reference to the old contract.

Worker proposals for the new contract have been denied by the University.

“How can you justify the president of the university making $601,356, while they are cutting pension for the employees by over 50 percent?” Garcia asked.

Workers have also expressed their concerns about staffing.

“We’re understaffed. We’ve lost so many people and the University is not replacing them. Quality is going to start going down,” Garcia said.

Garcia said that the issue of sanitation at medical centers, where cleanliness is extremely important, can be a matter of life or death. Many of the workers use chemicals in their jobs that can be harmful and may require medical attention.

Protesters said the University has ignored union proposals for no co-pay increases, which worries some workers about their medical bills.

Older workers who will not be directly affected by the retirement and benefit cuts that threaten new hirees attended the picket on Thursday to support their fellow union members. The workers have also received support from many organizations, including UC Student Workers Union Local 2865 (UAW) and UPTE.

“[The University] is trying to divide the union,” said Lucy Joseph, senior museum scientist at the UC Davis Viticulture and Enology Department. “We are fighting for the new employees to express our solidarity with them.”

LAUREN MASCARENHAS and KELLEY DRECHSLER can be reached at campus@theaggie.org.