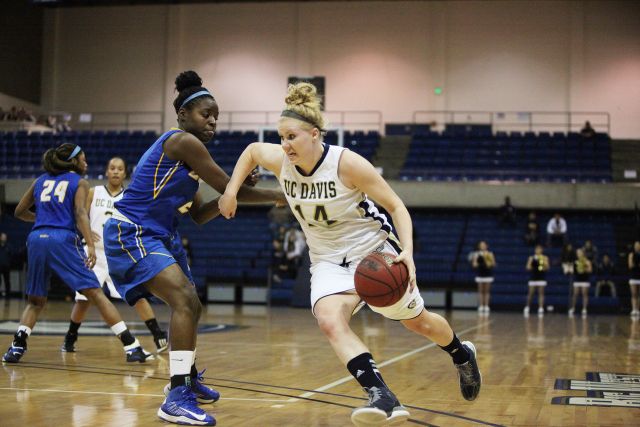 The UC Davis women’s basketball team split its two games last week and currently holds a record of 5-6 in Big West Conference play and is 10-12 overall. After losing to UC Santa Barbara 60-52 on Thursday, the team displayed its second-highest point production of the season by beating Cal Poly on Saturday afternoon, 79-69.

In their loss to UCSB, the Aggies trailed by seven points at halftime and could not take the lead for the rest of the game. With 2:58 remaining, Cortney French’s layup cut the lead to one, 52-51. However, the Gauchos scored six of their next eight points with clutch free throws to ice the game.

Sydnee Fipps led all scorers with 16 points and added four rebounds. Molly Greubel came off the bench to score 14 points.

Looking to bounce back from the tough loss, the Aggies came out to a hot start against Cal Poly. They scored the game’s first 11 points by converting their first four field goals, three of them coming from beyond the arc. The rest of the first half went back and forth and the Aggies led at the half 36-35.

“We started the game with just tremendous energy, knocking down shots,” said head coach Jennifer Gross. “Sometimes when you do that, obviously the other team is going to make a run at some point and so we did have to overcome a little adversity throughout the game.”

After reaching a 10-point lead with 12:03 remaining, the Aggies remained in control to finish the game and secure the win.

“The exciting thing was in the locker room, at halftime, I really felt like our team just believed in ourselves and we came out and really executed much better in the second half offensively. We were able to string some stops together defensively,” Gross said.

Senior Blair Shinoda showed off her passing as she tallied up nine assists and also added six points.

As the season is progressing, she is becoming more familiarized to a natural point guard’s role.

“It’s great when your teammates hit the shots, you get the assists. Just as a point guard, it’s really fun running in transition and hitting people like Sydnee who can score the ball,” Shinoda said.

“I thought that as a team we did very well,” she said. “I mean a couple of my steals were just tips from other players and I was just the one that ended up getting the ball. [By] making those extra passes, we knocked down shots so that made it really convenient. When other people are hitting, you’re left open.”

The game held a little more meaning to the players and coaches on Saturday. Sporting stylish pink jerseys, the Aggies supported their cause for breast cancer awareness.

“One of our players, [redshirt freshman] Lauren Beyer, her mom is going through breast cancer right now so it was very personal for us,” Gross said. “We were just playing a little extra for Lauren’s mom and for everybody else that we know personally that has been affected by this.”

The Aggies will travel to Honolulu for a game against Hawai’i on Thursday.

LUKE BAE can be reached at sports@theaggie.org.