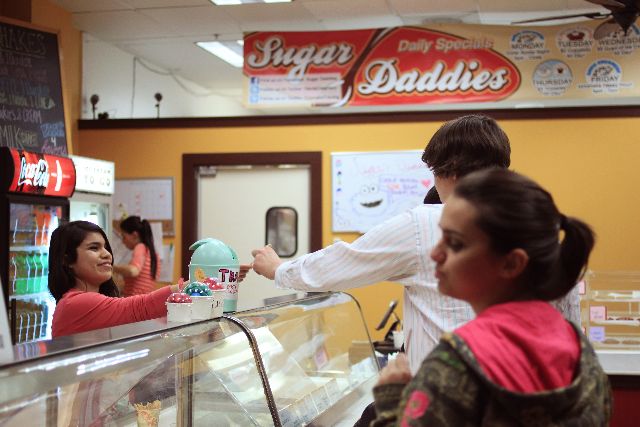 Davis residents looking to satisfy a sweet tooth need not look any farther than E Street, which is where 2013 best dessert winner, Sugar Daddies, supplies delectable desserts to its hungry patrons seven days a week.

In June 2011, Davis Creamery and the Sacramento-based bakery Cupcake Craving decided to merge businesses to create Sugar Daddies, bringing together freshly made ice cream and beautifully crafted cupcakes in the hopes of supplying everyone with some sort of treat that would hit the spot.

“The merge has worked perfectly,” said co-owner David Robert. “The energy between the desserts is great and everyone has an option.”

Sugar Daddies makes its ice cream fresh right in the back of the shop, and the cupcakes are delivered daily from Sacramento, inspiring the “sugar” in the name. The latter part of their title arose from the fact that the owners of both original stores are indeed dads.

Dollar Scoop Monday and $3 Cowpie Thursday are just two of the popular daily specials offered every Monday through Friday at the store.

“On special days we often sell out completely. There are lines out the door some nights,” said operations manager Stacie Hoyt.

Sugar Daddies gets business year round, whether it’s college students looking for something sweet to relieve stress before an exam, families looking forward to weekly treats at the store or patrons escaping the sweltering summer sun with a scoop of one of the store’s unique ice cream flavors. Seasonal cupcake and ice cream flavors are offered throughout year, like the popular pumpkin cupcake this past fall.

Some customers may be a bit skeptical when first seeing flavors like avocado coconut and maple bacon on the menu, but these unconventional flavors have proven themselves to many a customer’s taste buds. They are also indicative of the experimental and adventurous attitude Sugar Daddies has taken to the sweet business — an attitude that has so far reaped a positive response from the community the store caters to.

Students hoping to satisfy their next sweet craving can check out the ice cream and cupcakes at Sugar Daddies for themselves at 113 E St.