Davis bikes to work the most, survey says 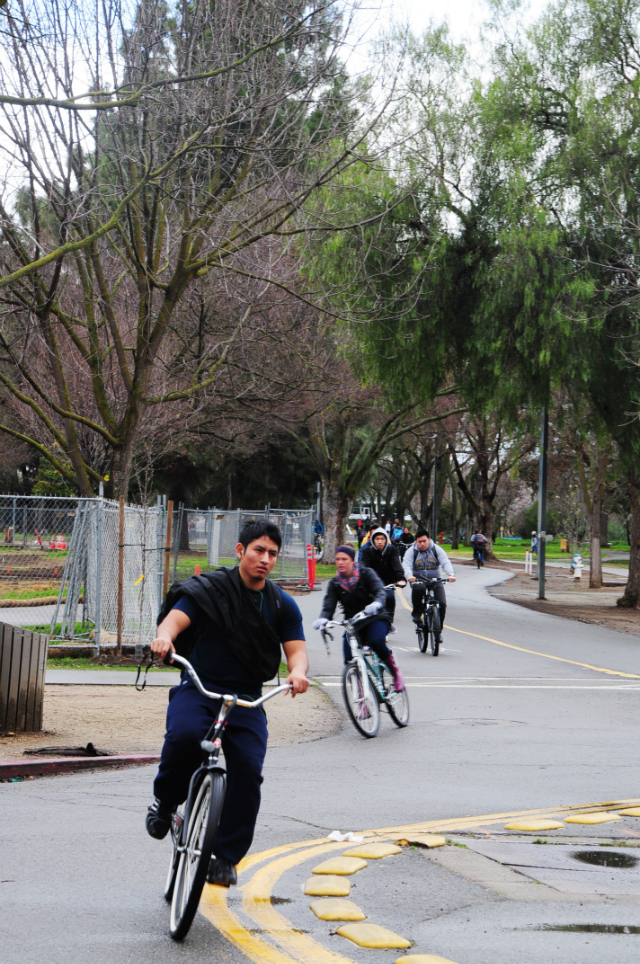 According to the U.S. Census Bureau’s 2011 Community Survey, approximately 16.6 percent of workers in Davis bike to work — the highest percentage of any city in the country.

The survey found that out of 29,663 workers, 4,923 are considered bike commuters, with a margin of error of 1,927. However, the survey only asked about a single method of transportation for the longest section of a commute, so it does not take into account those who utilize a bike for part of their commute or may only bike to work several days a week.

The survey also does not take into account students biking to campus, even if they are employed on campus and technically bike to work.

Nevertheless, the ranking is still a favorable one for Davis, home to the U.S. Bicycle Hall of Fame and often referred to as “The Bicycle Capital of the U.S.”

According to David Takemoto-Weerts, bicycle program coordinator at UC Davis Transportation and Parking Services (TAPS), a number of factors contributed to the development of such a bicycle-friendly culture in Davis. In the 1950s, Davis’ status as a small college town with flat topography, mild weather and a compact nature made bicycles a viable form of transportation for many residents.

However, bikes became a significant part of campus and community life starting in 1959, when newly appointed chancellor Emil Mrak began working toward his vision of a bicycle-friendly campus. Former Chancellor Mrak insisted that every building on campus feature bike parking in front of the building as opposed to in a less-accessible location. According to Weerts, many architects at the time were — and even today are — resistant to the idea of incorporating bike parking into the design of their buildings.

Gates were built around campus in 1967 to prevent vehicular traffic from traveling through campus, another cycling milestone under Mrak. However, Weerts also cited the importance of former UC Davis Professor Frank Child in developing the town of Davis into the bicycle-friendly city it is today.

In 1963, Child proposed that the roads be “striped” to eliminate conflict between increasing numbers of both motorists and cyclists. Although this was already common in European cities, Child’s idea, a novel and controversial one in the U.S., was instrumental in the development of something often widely incorporated into urban planning efforts today — bike lanes.

According to Weerts, the bike lane was essentially innovated in Davis, thanks to Child and many candidates running for Davis City Council in 1966, who ran on a “Pro-Bike Lane” platform.
In 1967, striping began on all arterial roads such as West Covell and Russell Boulevard. Changes were made to traffic laws and the vehicular code regarding the rights of cyclists and the rules they must abide by.

These efforts have contributed to Davis being one of the safest and desirable cities for bicycle commuters in the nation.

“Since 1987, only two bike fatalities have occurred in the City of Davis,” Weerts said.

There are numerous bike shops in Davis as well to suit the needs of bicycle commuters.

“We specialize in helping people get to and from work by bike, especially students,” said Dave Grundman, assistant manager at B&L Bike Shop. “That’s our core demographic.”

Grundman also noted the affordability of commuting by bike, making it a desirable option particularly for students.

“Whenever gas prices go up, we see a lot of people coming in looking to save on transportation costs,” Grundman said.

However, a number of other factors have still contributed to the decline of biking as a primary form of transportation among students, faculty and other Davis residents.

Davis bike commuting figures began dropping in 1990, due to increasing numbers of Davis workers commuting from outside of town because of the rising cost of housing and living in Davis.

Weerts cited the 1992 student referendum in which students voted to include the cost of Unitrans in their student ASUCD fees as a significant reason fewer students regularly used their bikes as a form of transportation. All trips on Unitrans were and are still free, and many students opted to take the bus as opposed to biking even for very short distances.

The perceived ease of commuting by bike in Davis is also relative depending on one’s own experiences.

“I’m a recent transplant from Alaska, so commuting down here is a breeze,” said Dave Coleman, service manager at Davis Wheelworks bike shop. “The coldest weather I’ve commuted in was -30, -50 [Fahrenheit] with the windchill. There were a lot of layers involved that day.”

According to Coleman, who commutes from Woodland, keeping an eye out for motorists is important regardless of the weather.

“Know the rules of the road,” Weerts said. “Understand that they apply to bikes and learn how to ride in traffic.”

Weerts also emphasized the importance of understanding when it is appropriate to “take the roadway” while biking. On a road without a bike lane and a lack of space for a cyclist and motorist to safely travel side by side, such as at the intersection of Russell Boulevard and Fifth Street, it is legal and safer for the cyclist to move into the center of the lane.

Prospective commuters concerned about what type of bike is best for just commuting need not worry too much about investing in a fancy road bike, as these are often magnets for theft. A used bike from a bike shop is ideal, and the only sorts of bikes that should be avoided are those purchased directly from big-box stores such as Target or Wal-Mart, according to Weertz.