Pliny The Younger worshipped across Davis 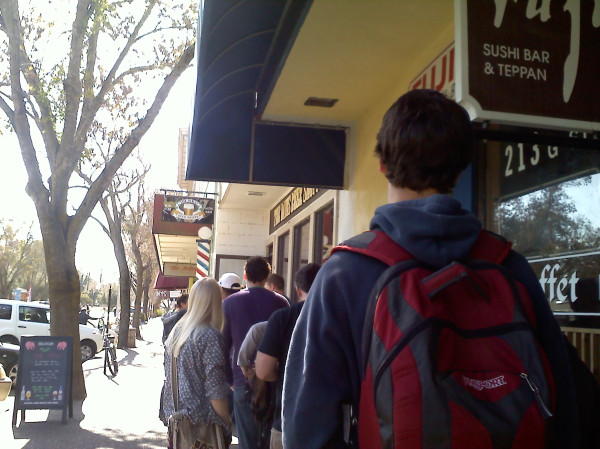 Earlier this morning, beer connoisseurs lined up outside The Davis Beer Shoppe to get a taste of the infamous Pliny The Younger. And it’s not too late to get in on the action.

Pliny The Younger — crafted by Santa Rosa’s Russian River Brewery — is frequently heralded as “the best beer in the world,” consistently topping the rankings and praised for its hops and balance. It’s a triple India Pale Ale, meaning it has triple the amount of hops as most IPAs. Russian River touts that it’s more expensive, more difficult and more time-consuming to make than other IPAs, and therefore, they don’t make it often.

Every year the brewery puts Pliny The Younger on tap for the first two weeks of February, and fans line up for hours. They release a very limited number of kegs to local bars and restaurants, who typically try to keep it secret — mayhem has been known to ensue.

Jeff Kessler, a second-year PhD student in energy and climate policy, got to the Beer Shoppe before its 11 a.m. opening.

Kessler said the beer is worth the effort.

“It’s really flavorful and hoppy, rich and aromatic. There are few beers that achieve that balance,” he said.

Last year, Burgers & Brew had a keg which was tapped in about an hour, according to Veronica Eddy, a server and bartender. Folks dying to try Pliny should keep an eye on the Burgers & Brew Facebook page, where they are expected to announce what day they’ll be serving it later this week.

“We do have the keg, but we’re not sure when we’ll be tapping it,” she said.

Burgers & Brew will probably serve 8-ounce glasses for $6, as they did last year, she added.

Vinnie Cilurzo, the Russian River brewmaster, will be paying the Introduction to Beer and Brewing (Food Science and Technology 3) class a visit this Thursday. He’s an old friend of professor Charlie Bamforth, who acknowledged that while Pliny is clearly a great beer, it might be overhyped.

“I don’t understand why anyone would line up for hours for a beer. There are plenty of other excellent beers out there,” he said. “It’s a fascinating and interesting phenomenon.”

For those who miss out, Pliny The Elder — Russian River’s double IPA — has been rumored to appear at Whole Foods, The Davis Food Co-op and the Nugget Markets. Retailers get one or two cases every four to six weeks and typically limit customers to two bottles.

“It’s not consistent, depending on distributors,” said Michael Taylor, wine steward at Nugget. “We sell it all in about a day or so. I got a case the other day and I have eight bottles left.”